Soldier, surgeon, academic - Associate Professor Lieutenant Colonel Dr Darryl Tong is combining all three roles for his PhD on face-and-jaw surgery in the context of warfare. 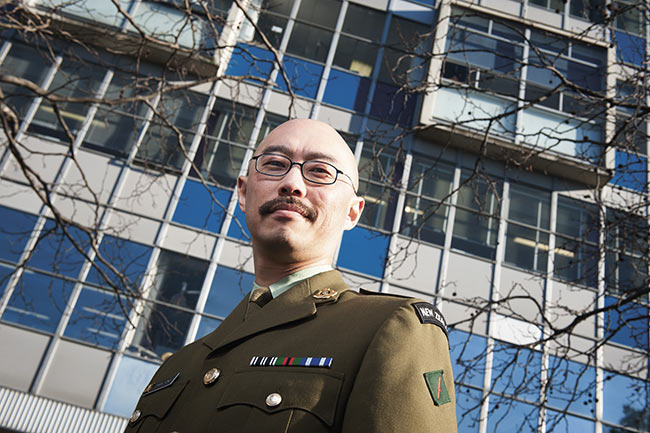 “The Hippocratic dictum states that war is the greatest school of surgery,’’ says Tong. “It’s a horrible thing, but in trauma surgery you learn so much. It changes what we do in civilian practice.’’

Tong, a specialist in oral and maxillofacial surgery (OMS) and a member of the New Zealand Army Reserves, discovered this first hand when he was deployed to Afghanistan in 2009.

“In terms of my professional career in surgery and the military, this was the absolute pinnacle. The one time where all your academic, surgical and military training come to one point.”

As well as being an OMS surgeon, Tong is also a member of the Department of Oral Diagnostic and Surgical Sciences in the Faculty of Dentistry. His PhD has three components: an historical review of the development and evolution of face-and-jaw surgery in warfare; a surgical audit; and a systematic review.

“We know what has been developed and how things evolved since World War 1. Certain things work and have done so for almost 100 years but, since medicine has gone to evidence-based practice, the surgical principles so far are anecdotal.”

The influence of face and jaw pioneers such as Harold Gillies (the “father of modern plastic surgery”) and Percy Pickerill, founding Dean of Otago’s Dental School, is still felt today, says Tong. “Most of their surgical principles still apply.”

For his surgical audit, Tong is comparing case studies from World War I with similar cases he worked on in Afghanistan.

“We’re very lucky. The Hocken Collections has archives from Pickerill, a contemporary of Gillies. He came back with case files and operation slides, x-rays and clinical notes of injured soldiers."

“There are striking similarities. The wounds are pretty much the same, but the technology now is that much better to facilitate a better outcome, both aesthetically and functionally.’’

Tong’s systematic review aims to validate what works in the context of contemporary war surgery. “From a military standpoint,  validating a set of principles and highlighting what works and what doesn’t, will culminate into a set of guidelines for non-face-and-jaw surgeons to utilise in a field situation.

“It will contain such information as: What can I do to minimise infection? How do you save someone from bleeding to death? What to expect in the first 24 hours ... the first 48 hours.”

Tong, who first gained experience in ballistic trauma working in the US, says the field has changed.

“Back then, before the second Gulf War, ballistic trauma was urban violence. If you talk about ballistics now you’re talking about explosive devices, rockets, mines, fragment injuries, even steel darts. In civilian trauma, you don’t see the same extent of injuries as you see in a war zone.’’

“It’s more than just soldiers. It’s the impact on health, on families and dependents, and society,’’ says Tong. “At the moment we’re completing a Vietnam War veterans’ mortality and morbidity study, looking at the impact of repeated deployments on individuals and whänau, veterans’ oral health status and injury prevention by the physiotherapy group.’’

Inspired by his time in Afghanistan, Tong has invented a device to help with the treatment of facial trauma in hostile environments. His Temporary Inter Maxillary Stabilisation (TIMS) device, developed in collaboration with dental technician Neil Waddell, has already received commercial interest in the US.

“When someone breaks their jaw, it needs to get wired back together. Not just anybody can do it. You also need equipment, light and to get to a place for treatment,’’ says Tong.

“Our idea is a mouthguard-like appliance that is filled with dental putty which sets in 45 seconds, even in the wet. It stabilises the fracture. There’s also a hole for a breathing tube to secure the airway for evacuation. There’s nothing like it out there.”