About the Centre for Free Radical Research

Our mission is to discover how free radicals and antioxidants work inside the body and how this knowledge can be used to diagnose and treat human disease and maintain optimal health. 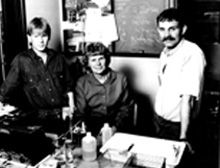 The development of the Centre for Free Radical Research has been an organic process, beginning in the early 1970s when Christine Winterbourn first joined Robin Carrell in the Clinical Biochemistry Department of the Christchurch Hospital.

Not long afterwards they transferred to the newly opened Christchurch Clinical School and in the late ‘70s / early ‘80s Christine Winterbourn set up her own laboratory, which subsequently became known as the Free Radical Research Group in 1990.

In 2012, the group was re-established as the Centre for Free Radical Research with four principal investigators, three of whom were previous PhD students of Christine Winterbourn: Margreet Vissers, Tony Kettle, and Mark Hampton. Dr Christoph Goebl was made the fifth principal investigator in 2021.