Professor Benson and the Benson Fund 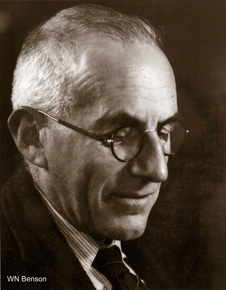 William Noel Benson, DSc, FRS, 1885-1957, was Professor of Geology at the University of Otago from 1916 to 1949. For many years, he ran the Department of Geology single-handedly. He was an accomplished practical geologist: a field mapper, petrologist, stratigrapher, geomorphologist, paleontologist and more. He was also a careful observer and writer, and an accomplished artist. Many of his papers appeared in the Transactions of the Royal Society of New Zealand.

Douglas Coombs, a former student of Benson’s, and later Professor of Geology at Otago, revealed something of the man in an obituary in Nature, 1957. Benson worked“…with extraordinary energy, enthusiasm and persistence… students will remember his well-loved figure forging ahead in front of panting field parties…”

Benson’s legacy lives on at Otago, both intellectually and through the Benson Fund which was started by a bequest from Benson’s Estate to support field-based research. Later contributions from companies and from alumni have expanded the Fund. Interest from the Benson Fund is used to support the field work of many of our students. Similarly, the Bradshaw Fund supports field work in remote places.

Benson made the most of field opportunities in this dynamic land uplifted high. Field mapping, supported by the Benson fund, is the key to success for Otago geology students. We have followed Benson’s example in New Zealand and beyond. Field work helped us achieve the status, in 2006, of New Zealand’s top PBRF-rated earth sciences department.

“Thanks to support from the Benson fund, I could map an area in the Livingstone Mountains. After that, I was hooked on field-based geology. . . ” Dave Craw, 4th year, 1974

“…the Benson fund enabled me to scramble all over the Remarkables near Queenstown looking at schist. There turned out to be a major terrane boundary in the area, which remains an important locality recording accretionary processes on the margin of Gondwana. That small contribution from the Benson fund produced a remarkably large contribution to New Zealand geology.” Simon Cox, 4th year, 1985. 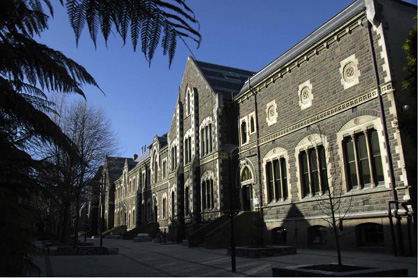 Geology Building, the Quadrangle, University of Otago, viewed from the south. This historic part of the University Campus is preserved largely as Benson knew it. In Benson’s time, Geology occupied the south end of the building, near the viewer; the Department now occupies the whole building. Benson’s room was on the first floor – the central window in the middle of the picture. Photo by R Ewan Fordyce.

Benson was an able artist, and produced many illustrations in his published papers. This panorama of part of the Fiordland coast appeared in plate 3 of an article by Benson, and students Bartrum and King, 1934, in Transactions of the Royal Society of New Zealand 64.

Benson was first to recognise Cambrian rocks in New Zealand, from Cobb Valley in northwest Nelson. As part of his research, he produced this hand-painted field map; the original is still held in the Department. Some of Benson’s original specimens of trilobite-bearing limestone, the Tasman Formation, are on display in the Geology Museum. The formal report on the fossils, published in 1956, was one of Benson’s last contributions.