The Australian and Pacific Plates generally don't move smoothly past each other. They move in a series in a small rapid motions each of which is accompanied by one or more earthquakes. Deep earthquakes under North Island form a well defined band (seismic zone) running northeast from Marlborough through White Island. Shallow earthquakes tend to occur to the southeast of this seismic zone, while the deeper ones occur towards the northwest. The earthquakes forming this pattern occur where the Pacific Plate is being subducted under the Australian Plate along the Hikurangi Subduction Zone. This pattern of deeper earthquakes towards the northwest of North Island reflects the northwest dip (or slope) of the boundary between the two plates (the Benioff zone). Conversely, in the southwest of South Island where the Australian Plate is being subducted below the Pacific Plate, the deeper earthquakes occur on the southeast edge of the seismic zone where the Benioff zone dips steeply to the southeast. 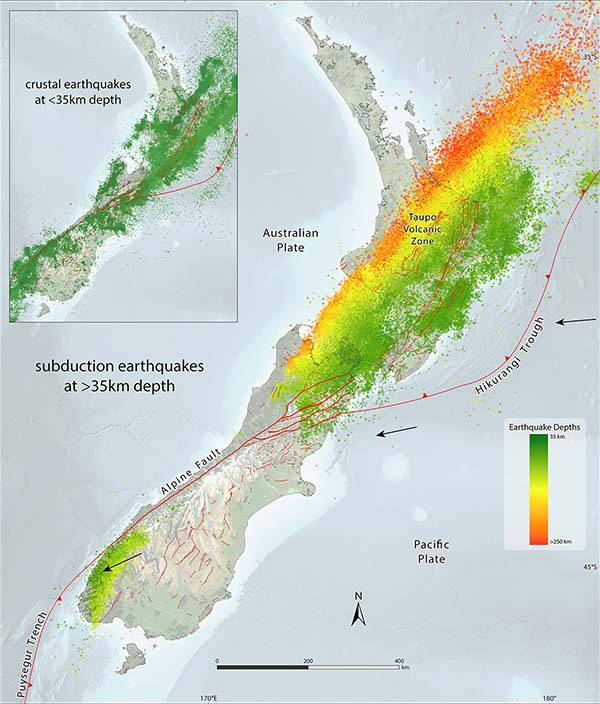 The Alpine Fault is the dominant structure defining the Australian-Pacific plate boundary in the South Island of New Zealand. It runs as a single structure for over 500 km between the Puysegur Trench in the south and the Marlborough Fault System in the northeast.

As the Pacific Plate is subducted below North Island, the part of the Australian Plate that makes up the central North Island is stretched and has, over many millions of years, become thinner than normal crust. Water released from the Pacific Plate deep under North Island combines with the hot rock of the Australian Plate at about 100km depth and causes a small amount of that rock to melt. This molten rock rises to the surface through the thinned crust and is either erupted from volcanoes like Ruapehu, Tongariro and Ngaruhoe or sits within the crust and heats it, and the water it contains, up causing geothermal activity around Taupo and Rotorua. The area of volcanic activity is referred to as the Taupo Volcanic Zone (see map above).

The Solander Islands, at the western end of Foveaux Strait between Fiordland and Stewart Island / Rakiura, are the tips of a large extinct volcano related to subduction of the Australian Plate beneath the Pacific Plate. They last erupted between 150,000 and 400,000 years ago.

Along the Alpine Fault the plates are not only moving past each other, they are also moving towards each other. Here, the main part of South Island is being thrust over the Australian Plate on a bearing of about 250 degrees. This compressional movement is causing the Southern Alps to be uplifted at a rate of approximately 7 millimetres per year forming a high elongate mountain range parallel to the Alpine Fault.

Interested in finding out more about the Alpine Fault?