DNA "clocks" provide an important method for determining time-scales of evolution. But the pace at which these clocks "tick" can be difficult to measure, particularly because DNA evolves at different rates in different species, and because rates may perhaps vary over time ("time-dependency"). Up until now, DNA clocks have been calibrated using ages of fossils, island formation, and a range of dated geological events (e.g. rise of the Panama Isthmus). But each of these methods potentially lacks precision for a variety of reasons. Our Marsden-funded research program seeks to establish calibrations across a range of geological ages using a new, more precise method: river evolution.

New Zealand's South Island is a geologically-dynamic and mountainous region that has experienced extensive glaciation and ongoing uplift (Fig 1) over several millions of years. This isolated, active landscape represents a natural laboratory for evolutionary research. Recent geological studies have revealed dramatic evolutionary histories for many South Island river systems. These histories include river reversal and river capture events— driven by tectonics and glaciation — that involve wholesale transfer of streams from one catchment to another (Fig 2). Examples of such drainage alterations are illustrated in Fig 3 (red arrows = present drainage; blue arrows = historic flow direction). In addition to their geomorphological effects, each of these geological changes has physically isolated populations of freshwater fish that were previously connected (vicariance) (Fig 2). 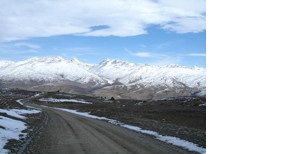 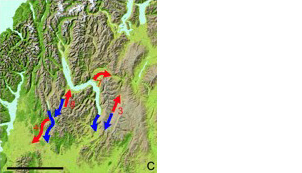 Our genetic studies indicate that river capture is one of the key factors underlying the biogeography and evolution of New Zealand’s freshwater fishes (Fig 4). The links we have discovered between river history and fish biogeography are analogous to a host-parasite system, with rivers as "hosts" and fish as "parasites". Under this model, river evolution can lead to the formation of new fish species. In simple terms, geological isolation leads to the accumulation of genetic differences among the separated fish populations. In addition, the amount of genetic divergence among populations is correlated with the length of geological isolation. Our project ultimately uses this causal link between geology and genetics to quantify rates of DNA change.

Although much of our recent work has focussed on evolution in the rivers of southern South Island (see above), the situation is comparable further north. The waterways of central New Zealand, in particular, have similarly been shaped by recent glacial and tectonic activity (Fig 8). Analysis of river terraces in the Marlborough region indicates that the Pelorus River (Fig 8: arrow 9) once drained south through the Kaituna valley (Fig 8: arrow 5; Fig 9) into the Wairau River. Reversal of the Kaituna (Fig 8: arrow 5) led to isolation of these rivers and their associated fish populations. Based on geological dating techniques, we have developed a timeline for the isolation of these three river populations (Fig 10). We subsequently tested the geological hypothesis using fish collected from across the region (Fig 11). 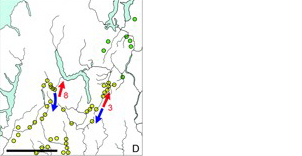 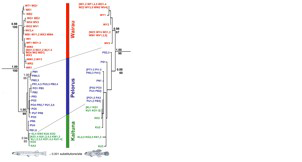 Glaciation has yielded similar evolutionary consequences elsewhere in central New Zealand. In particular, geological data indicate that glacial connections between headwaters of the Clarence and Wairau rivers (Fig 13: arrow) ceased only 10-20,000 years ago. Under this model, we predicted that fish populations from the Clarence and Wairau systems would be closely related relative to geographically intermediate Awatere River populations (Fig 13). To assess this idea, we collected fish from all three systems (Fig 14). Subsequent DNA analysis strongly supported the geological model of late Pleistocene connectivity across the Clarence-Wairau divide. Specifically, Wairau and Clarence populations of both Galaxias 'northern' (Fig 15) and G. divergens (Fig 16) are closely related, whereas Awatere River populations of these species are, by contrast, distantly related (Fig 15, Fig 16). 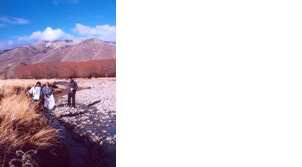 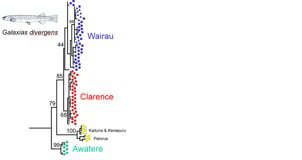 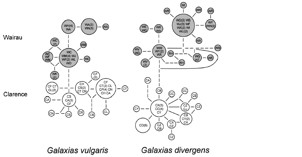 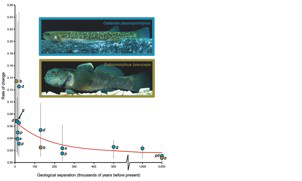 As well as the congruent phylogenetic relationships paralleled across two distinct species, Wairau versus Clarence populations show almost identical levels of genetic differentiation in each case (Fig. 17). This increases our confidence that the link between geology and genetics is robust. In keeping with our results from a variety of independent studies, we can conclude that the galaxiid mtDNA clock is ticking substantially faster than expected.

Broader implications of this work

Our work has illustrated the important role of geology in shaping biological evolution, and thus shows the value of interdisciplinary approaches to evolutionary science. Biogeographical research certainly benefits from the predictive framework provided by geological information. Additionally, once a molecular clock is well-calibrated, genetic research can potentially be used to assess rates of landscape evolution. We anticipate that ongoing biological research will help to refine our understanding of geomorphology. In light of this genetic work involving several fish species, and spanning a broad range of geological events and timeframes, we are evaluating the "time-dependency" hypothesis recently suggested for vertebrate DNA evolution. This hypothesis predicts fast genetic divergence rates over short evolutionary timescales, but slower rates for older events. Our research certainly seems to support rapid rates of mtDNA change over short timescales, and we are beginning to assess the possible decay in rates over time (Fig. 18). If it finds widespread support, "time-dependency" will have major implications for our understanding of rates and causes of evolution, particularly over late Pleistocene and Holocene timescales.