Illustration of flipper and other bones of Mauisaurus haasti, produced for James Hector's 1874 article on New Zealand Cretaceous reptiles

The plesiosaur Kaiwhekea katiki, named by Arthur Cruickshank and Ewan Fordyce in 2002, is one of the most complete fossil reptiles described from New Zealand. The 7 m-long fossil includes the skull, jaws, vertebrae and ribs articulated almost in life position.

Plesiosaurs and other marine reptiles, such as mosasaurs, have been known from New Zealand since the 1860s. British anatomist and paleontologist Richard Owen identified the first specimens. Much field work was carried out in the late 1800s, leading to recognition of many new species. All of the named specimens, however, were fragmentary, without clearly associated skull and skeleton. (For example, the widely-quoted species Mauisaurus haasti is based only on a paddle.) Kaiwhekea is the first plesiosaur described from New Zealand to have skull, limbs and other elements clearly associated. (Other relatively complete plesiosaurs - as yet undescribed, and in Canterbury Museum - are now known.) 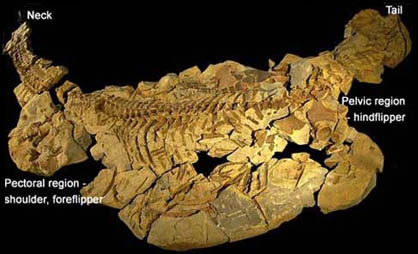 Skeleton of the holotype and only known specimen of the New Zealand plesiosaur Kaiwhekea katiki. The skeleton is viewed from above, with the animal lying on its right side

Kaiwhekea was recovered from the Katiki Formation near Shag Point, Otago. This rock unit was deposited in a sheltered embayment floored with a soft, soupy, oxygen-poor sediment. Belemnite fossils and fragmentary mosasaurs from nearby indicate an age of Haumurian Stage, or Late Cretaceous – perhaps 69-70 million years old.

The plesiosaur was preserved inside a large concretion which was recovered bit by bit over about 30 days of field work. The concretion was riddled with cracks, which allowed it to be broken apart easily. As excavation proceeded, we found that percolating water had rotted much of the bone, and fell away leaving natural moulds in the rock. Most of the bones, however, are articulated– barely disturbed from life position when the animal's carcase fell onto the muddy sea floor. 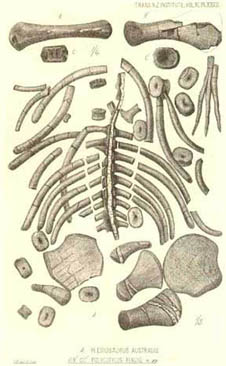 Features of the skeleton behind the skull indicate an "advanced" plesiosaur, but don't reveal exact relationships for the animal. Skull features are more-informative. The particular combination of skull features is unlike any previously-described plesiosaur, which is why the new generic name Kaiwhekea was proposed. The unusual structure of the cheek region suggests that Kaiwhekea is closest to the family Cryptoclididae, a Middle Jurassic to Late Cretaceous 'long-necked, short-headed' group of plesiosaurs. Such an identification is unusual, because previously-named New Zealand plesiosaurs were placed in the family Elasmosauridae - animals with small heads and often-exceptionally long necks.

On the skull of Kaiwhekea, the large forward-looking orbit hints at binocular vision. A large temporal fossa (skull opening) behind the eye indicates large fast-acting and/or powerful jaw muscles. Teeth are slim, small and roughly uniform in shape and size, consistent with a diet of medium-sized soft-bodied prey. The neck is long, but in life was probably not particularly flexible. Proportions of the hind-flipper are consistent with fast swimming capabilities. Perhaps the plesiosaur fed at depth, where the large eyes might have been an advantage.

Plate tectonic reconstructions suggest that, when Kaiwhekea lived, the Otago region was close to the polar circle. It probably had quite a seasonal climate, with long summer days, long winter nights. At the time, New Zealand was already isolated from Gondwana, but Australia, Antarctica and South America were still in contact.

Only one specimen of Kaiwhekea has been recognised, so little can be said about the time range for the species. As for elsewhere in the world, no plesiosaur remains younger than Cretaceous have been found in New Zealand. It is widely thought that plesiosaurs went extinct at the end of the Cretaceous, in the "KT" boundary extinction that also accounted for the demise of dinosaurs.

The unique specimen of Kaiwhekea katiki is catalogued in the Geology Museum, University of Otago. It is on temporary loan to Otago Museum, Dunedin, and may be seen in the Southern Lands, Southern People gallery.

Technical details are in the original article on Kaiwhekea. Reprints of the article are available to bona fide researchers on an exchange basis; write to Ewan Fordyce.