Waharoa ruwhenua: a long-snouted early baleen whale from the Oligocene of New Zealand

Fossils of ancient baleen whales collected since the 1980's from Oligocene marine rocks of the South Island of New Zealand have helped reinterpret some historically important but confusing fossils reported in the 1940s and 1950s. New fossils have determined that Mauicetus parki Benham, 1937, Mauicetus lophocephalus Marples, 1956, and Mauicetus waitakiensis Marples, 1956 all belong to different genera of whales. Specifically, Mauicetus parki is now known to be a stem balaenopteroid similar in skull anatomy to many Miocene whales like Parietobalaena and Isanacetus, and recent U. Otago research has identified M. lophocephalus and M. waitakiensis to belong to a more archaic group known as the Eomysticetidae - the earliest purportedly toothless baleen whales. Because all three belong to different genera, the species named later need new genus names (whatever is named first gets priority); the two eomysticetids have been renamed Tokarahia lophocephalus and Tohoraata waitakiensis. These new advances have solved many existing problems with the taxonomy of fossil baleen whales from New Zealand, but do not address questions regarding the biology, growth, and evolution of the earliest toothless mysticetes.

New fossils from the same rocks include a stunning collection of three skulls of an eomysticetid whale distinct from Tokarahia and Tohoraata, and form the basis for the newly described species Waharoa ruwhenua. These three skulls have nearly identical earbones, identifying all three as the same species, but the skulls are of different sizes - reflecting different growth stages. Like other eomysticetids, the adult skull has a greatly elongated snout and palate with an anteriorly placed blowhole, and large jaw muscle attachment areas. In contrast, the juvenile skulls have proportionally much shorter snouts/palates, more similar to the condition of modern adult baleen whales. This growth pattern suggests that the palate elongates more rapidly in Waharoa (and probably eomysticetids in general) than modern mysticetes. Why is the palate of Waharoa so long - and why did it grow so fast? The single most important factor in development of the snout and mandibles is feeding. A short snout is better for juveniles who are still being weaned, as suction is needed to ingest milk (especially so underwater). But what about a long palate? Baleen whales feed by filtering small organisms out of the water column - krill, amphipods, and even fish - using baleen. Rorquals like humpback and blue whales are lunge feeders, and take massive "bites" out of prey-filled water and filter out krill by contracting their giant throat and expelling water through the baleen. Right whales on the other hand have narrow but very elongate and arched snouts in order to have a much larger filter feeding apparatus shaped like a curtain; rorqual baleen is short, but the palate is also broad to maximize the amount of water the whale can swallow. Right whales are skim feeders, and cruise slowly through slow-moving prey with their mouth slightly open so that water continuously flows through the baleen. Waharoa has a very elongate but narrow palate - but it is not arched. The jaw joint is delicate, precluding lunge feeding of rorquals. Despite being flat, the elongate, narrow palate likely represents a similar mode of skim feeding like right whales, but not as efficient. The snouts of juvenile Waharoa grew very fast in order to switch from suction feeding for milk (short snout) to the elongate snout needed for skim filter feeding as adults. Additionally, the preservation of juvenile baleen whales in the Oligocene of New Zealand suggests that continental shelves of subtropical Zealandia or a separate landmass closer to the equator were an ancient calving ground for Waharoa and other eomysticetids.

The earbones of baleen whales (and cetaceans in general) are often found isolated in the rock record, and finding earbones associated with skulls is always important in order to properly identify isolated specimens. The earbones of cetaceans are unique in that they are approximately full adult size at birth - they grow much faster than the rest of the skull so that hearing is ready at birth. Because of this invariant size, earbones are assumed to not change during growth, which helps interpret isolated earbones in the fossil record. However, growth can occasionally affect earbones in addition to the rest of the skull - and Waharoa is no different. The tympanic bulla of Waharoa increases in length by about 1 cm during growth - which may mean that many isolated earbones identical in morphology but with size slight differences in size may actually represent the same species. In other words, there is somewhat less variation in earbone size within archaic mysticete species (like Waharoa and other eomysticetids) than formerly considered. 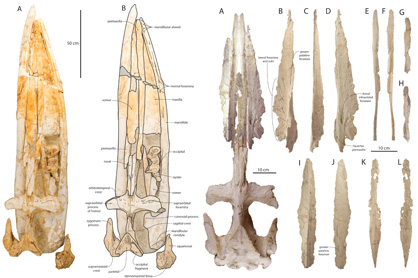 Another important question is: when did baleen whales lose adult teeth? Modern fetal specimens develop teeth but these are resorbed before birth, whereas primitive baleen whales like Mammalodon and Aetiocetus retain adult teeth - and the latter even has evidence for having baleen and teeth at the same time. Eomysticetids are crucial towards answering this question, since they are slightly more closely related to modern baleen whales than toothed mysticetes. Indeed, eomysticetids were initially interpreted as being toothless - but is that true? The poor preservation of Eomysticetus actually precludes answering this question, since the tooth bearing parts of the skull and jaws are either damaged or completely missing. But these features in Waharoa ruwhenua are very well preserved, and show empty tooth sockets in the mandible and snout. No teeth are preserved, but similar structures are known in Yamatocetus and Tokarahia. Indeed, a partial possible tooth was recovered from Tokarahia lophocephalus - but not within a socket. Teeth of eomysticetids would have been few and small, but likely with no function in terms of feeding - unlike older toothed mysticetes with functional dentitions. As is always the case in paleontology, more fossils are needed. 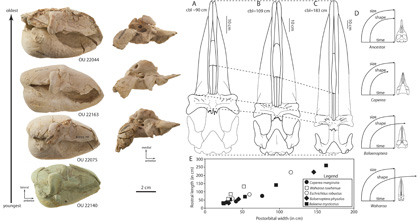 Earbones and growth of Waharoa ruwhenua. Left side: photographs of tympanic bullae showing changes in size (left most column), and changes in periotic shape (second column from left). Right side: relative growth of skull in Waharoa (A-C); conceptual growth model for relationship between skull growth and body size in Waharoa (D); rate of growth of palate of Waharoa (E).

Models were generated using Agisoft photoscan Pro using ~200 images for each model shot on a DSLR camera by Bobby Boessenecker. Units for 3d models are in Metres. Since a lot of 3D software is unit-less you may need to scale the mesh to get the correct size. Please contact luke.easterbrook@otago.ac.nz for additional information concerning the models. Two file formats are supplied: