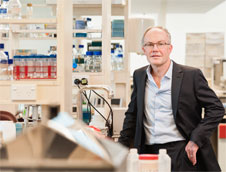 An innovative approach in drug discovery in combating one of the world’s greatest health scourges – tuberculosis (TB) – is being pioneered by an international research group that has Otago microbiologists as key leading members.

The team, which includes Professor Greg Cook and colleague Kiel Hards of Otago, recently published its findings on the promising approach of identifying the key molecular components of Mycobacterium tuberculosis, which causes TB, that supersensitise the pathogen to new TB drugs so that their effectiveness can be enhanced. Their study was recently published in the leading international journal PNAS.

The World Health Organization states that TB is one of the top 10 causes of death worldwide and a leading killer of HIV-positive people. Globally, 1.8 million people died of the disease in 2015, and 10.4 million new cases were reported – an estimated 580,000 people with these new cases had multidrug-resistant TB.

“Our team is trying to develop new ways to treat this horrible disease, because our existing weapons against it are increasingly failing, too toxic and act too slowly. Finding new drugs is an incredibly difficult proposition, with only two new drugs licensed for TB in decades.

“We believe the key to beating TB is to discover what the key components of its physiology are that make this pathogen so stubborn to treatment by many TB drugs. During the course of his PhD work at Otago, Kiel Hards uncovered respiration as an essential component in allowing TB to avoid the action of new TB drugs.

“We’ve been investigating the key respiratory components that sensitise TB to new and old TB drugs with collaborators at Nanyang Technological University, Singapore and Albert Einstein College of Medicine, USA. By knocking out the two respiratory oxidases of TB simultaneously – one through gene deletion and other through drug inhibition, this led to rapid cell death of drug-tolerant TB (persisters) and cleared its infection in mice.

“We do not yet know how it might work in humans, but this work clearly highlights the incredible potential of targeting the respiration of TB with drugs that take out both respiratory oxidases. We think that it presents an excellent avenue to develop fast-acting drugs that synergise with current TB medicines and could ultimate revolutionise the way we treat TB infections.”

Professor Cook says that TB treatment is currently a lengthy and often unpleasant process that involves drugs that have to be taken for many months and can turn out to be ineffective because bacteria have developed resistance to the compounds.

“With our fresh approach to interfering with the pathogen’s respiration, we are confident that new treatments that bypass the multiple-drug resistance problem, and cut back the existing long treatment period, will not be that far around the corner.”