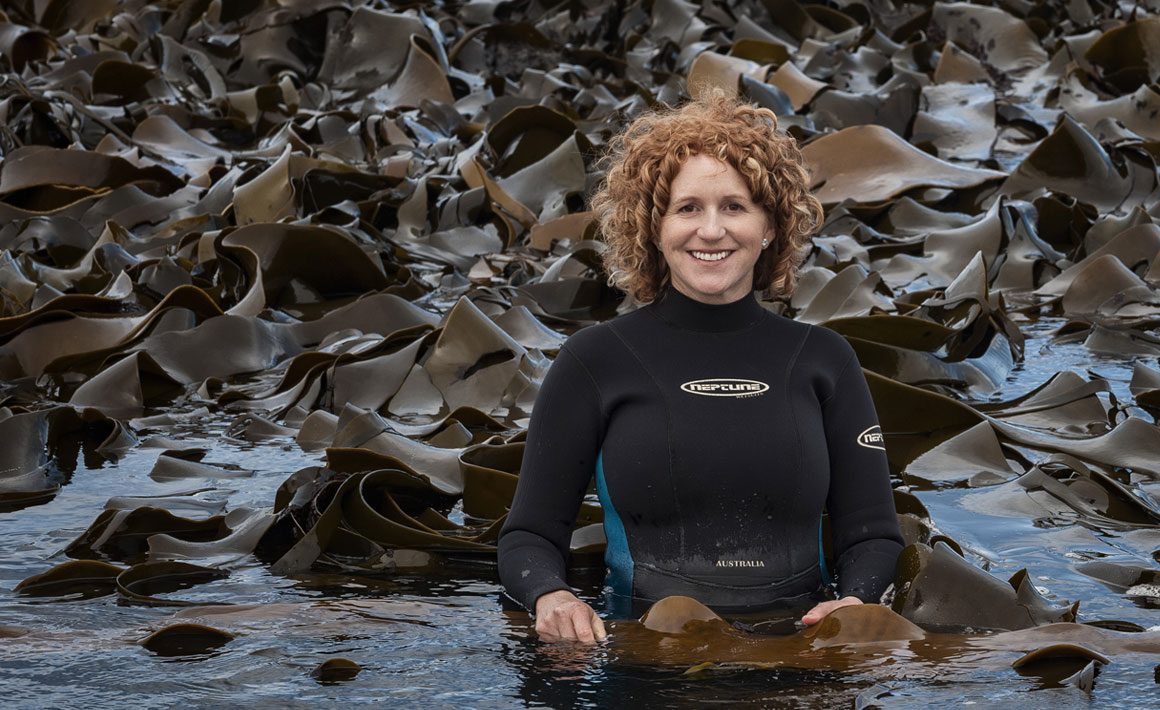 Associate Professor Ceridwen Fraser: “We want to look into the future and try to predict what will happen to Antarctica in a rapidly warming world.”

Once considered too distant to reach, Antarctica may not be immune to the arrival of foreign species and other floating objects, with as-yet-unknown consequences.

Antarctica has long been seen as a continent apart, a pristine wilderness separated from the rest of the world by distance and the fierce Southern Ocean.

But now Marine Science Associate Professor Ceridwen Fraser has shown that Antarctica is far from isolated. Climate change will render it vulnerable to invasion by species from elsewhere, with unknown consequences for its unique plants and animals.

After a PhD and a postdoc at Otago, Fraser went on to a stellar career in her native Canberra. Now with a Rutherford Discovery Fellowship, she has transferred her lab back to Dunedin to tackle a wide variety of biogeographic topics relating to the Southern Hemisphere – and particularly Antarctica.

“The Rutherford Fellowship gave me a long-awaited chance to return to New Zealand. Otago is a dynamic and stimulating university with a very strong focus on Antarctic and marine research, so it’s a perfect fit for my group’s interests.”

Fraser recently explored how diverse species can raft across oceans by hitching a ride with breakaway kelp plants carried on the waves. But Antarctica was always considered too distant to reach from the southern continents.

“We’re using a whole ecosystem approach to tackle important biogeographical questions, overturning the idea that Antarctica is isolated and working out what’s happened with past climate change.”

But when bull kelp found washed up near the Antarctic Peninsula turned out to be from the Kerguelen Islands, Fraser tried to find out how it could have travelled the record-breaking 20,000 kilometres. Early modelling attempts showed it shouldn’t have been possible.

Everything changed when the team included a physical effect known as Stokes drift, where floating objects can be propelled in the direction of wind-driven surface waves. The bigger the wave, the larger the drift, and Antarctic storms typically generate waves from 10 to 15 metres high, with the highest recorded at 23 metres.

The discovery has provided new tools for calculating drift pathways, particularly in stormy seas, for all kinds of floating objects, including plastic pollution, debris from ships and crashed planes, volcanic pumice, driftwood, seaweeds and even messages in bottles.

There are huge implications for Antarctica with global warming. At the moment, species that do reach the continent are unlikely to survive Antarctica’s icy welcome on arrival.

But higher temperatures may give some species just enough opportunity to stake a claim to the frozen continent and thrive. Local species are generally very slow-growing, so there could be major ecological changes in Antarctic marine ecosystems.

Survival and extinction in such extreme environments can be a matter of degrees. Some of Fraser’s other research into Antarctic biodiversity suggests that heat from volcanoes may have helped land-based plants and animals survive on the continent through ice ages.

“There are so many questions about how Antarctic species survived recent ice ages, whether new species are able to get there by themselves and how Antarctic biodiversity will change with the rapid warming the world is now facing,” says Fraser.

“We’re building a better understanding of the evolutionary history of some of the organisms we find there and how they have dispersed to and around the continent.

“We’re using a whole ecosystem approach to tackle important biogeographical questions, overturning the idea that Antarctica is isolated and working out what’s happened with past climate change.

“Over the next few years we’re hoping to start to understand what’s in store. We want to look into the future and try to predict what will happen to Antarctica in a rapidly warming world.”

Next:
A solution in search of a problem?

Next:
The Māori home front: an untold story