History of the Hunter Centre

The Hunter Centre sits on land that was the site of the original Knox Church, built in 1860. When the Church moved to its current location on the corner of George and Pitt Streets, the building continued to be used for Bible classes as well as a lecture and meeting hall, until 1901 when it was replaced by a new purpose-built Knox Church Sunday School.

During the late 1950s and early 1960s the University leased the space to accommodate, amongst other groups, the Department of Pharmacy and Sir Horace Smirk's Hypertension Clinic.

In the early 1970s the land was purchased by the Dunedin Public Hospital, and two new buildings were constructed—Campus Close and Stewart Lodge—to provide accommodation for the Hospital's junior doctors.

The buildings and land were sold to the University in 2007. Following a government increase in funding for medical and dental education, plans were developed to convert the two residences into a Health Sciences-focused teaching and learning facility. This directly addressed the Division of Health Sciences' acute lack of space at the time.

Team Architects were tasked with redeveloping the site into a world-class health sciences-focused teaching and learning facility. Their design incorporated existing structures on the site, resulting in both environmental and budgetary benefits.

The Hunter Centre was officially opened on 5 September 2008.

The Centre is named after the late Professor John Hunter, a distinguished cardiologist, inspirational teacher, and leading medical researcher.

The Hunter Centre was opened on 5 September 2008 by Professor David Skegg, then Vice-Chancellor of the University of Otago. The opening was attended by Professor Hunter's children, including Dr Mike Hunter, who is now a Professional Practice Fellow within the Dunedin School of Medicine. 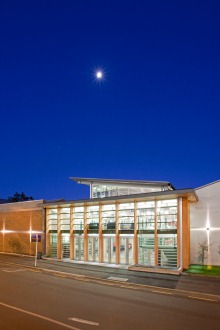