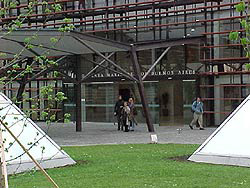 UCA has the most modern urban campus in Argentina, made up of four impressive buildings, the first of which opened in 1996. There are five computer labs with full Internet access for the students, four university cafeterias, and a beautiful esplanade along the River Plate. The facilities also include a church, four multimedia auditoriums, banking and ATM services, health center, Xerox machines, a comfortable open-shelf library and Argentina's best on campus TV and Radio studios. All the buildings are connected by an underground tunnel.

Buenos Aires, the capital of Argentina, is the one of the most cosmopolitan cities in the Americas, with characteristics shaped by European immigration in the late 19th and early 20th centuries. BA has magnificent buildings, monuments and parks, and although it is a big city, its transportation system makes it easy to move around.