Congratulations to Holly Hedley and Tim Cochrane on being awarded the New Zealand Pegasus Scholarships for 2014.

Both recipients are delighted to receive this award and look forward to their time in London.

Holly comments, ‘I have been working in the specialist health litigation team at Buddle Findlay since I graduated from Otago University. I have a real passion for health law (in no small part due to the many skilled lecturers at Otago Law school) and I hope to use my time in London as a Pegasus Scholar to gain further experience working in health related litigation. As well as working in practice, I also have an academic interest in health law and I am often involved with teaching training seminars for health professionals. I hope to begin post-graduate study in law the near future’.

Tim says, ‘The Pegasus will allow me to work in a top barristers' chambers in London for a period of six weeks to develop my experience and networks. The Pegasus will be an amazing opportunity, and I'm very grateful for the support of the Faculty!

In 1987 the Inner Temple, one of the Inns of Court in London, established the Pegasus Scholarship Trust, with the aim of building links between the legal professions of the many countries in the world who live under the common law system. The Trust is supported by each of the Four Inns of Court, which are societies of judges and barristers with wide responsibilities within the legal system in England. 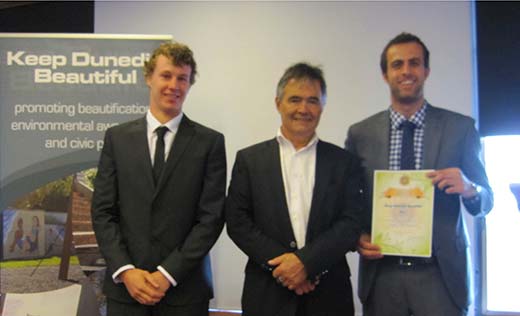 Every year, SOULS holds a Law Camp for our Second Year students, to meet each other in an environment outside of the lecture theatres. In 2013, we decided that the event had been too insular, focusing too much on the Second Year class, at the expense of a sense of humility and service. Thus, we decided to introduce a community service element into the Camp, which had always been present, but had the potential to be much more.

To that end, we decided to send students out into the community, into Mosgiel and the surrounding area, to perform service for members of the community. We had an overwhelming response from local businesses and schools, and we endeavoured to get as much done as possible on the Saturday afternoon of Camp, when students would have otherwise been doing sports activities or other team bonding events. Most students spent about 2 hours out at various places, ranging from the Mosgeil RSA, to cleaning up rubbish Puddle Alley, to helping paint and clean-up and Mosgiel Central Kindergarten. SOULS has been recognised for a “Keep Dunedin Beautiful Award”, to be awarded on Monday the 3rd of March. Students giving back to the community should be encouraged as much as possible, and this award, while not anticipated or sought, is fantastic to show that the work students do is appreciated.

Our thanks go to the Law Faculty and Otago University for their support.

On September 12, the Faculty of Law joined with the Departments of Politics and Film, Media and Communication to host a special "webinar" on the theme of Dirty Politics: Media, Politics and Law. The purpose of this event was to address some of the deeper underlying questions raised by Nicky Hager's book Dirty Politics: How attack politics is poisoning New Zealand's political environment from the perspective of the three participating academic disciplines. It consisted of an initial interview with Mr Hager, followed by three 50 minute discussion panels looking respectively at the media, political and legal issues raised by the book. This discussion was webcast live from the University of Otago's media studio so that a national audience could participate in it.

The event was organised and chaired by the Faculty's Professor Andrew Geddis, with Professor Paul Roth being joined by the University of Canterbury's Professor Ursula Cheer in a discussion of some of the legal issues raised by Mr Hager's work.