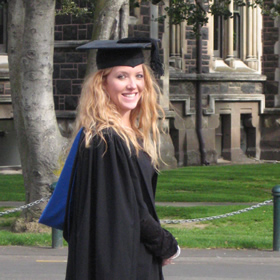 Not sure what area of science she wanted to pursue, Frances Greer initially enrolled in the University of Otago’s Health Sciences First Year (HSFY) programme so she could sample a wide range of subjects. She found that she particularly liked the neuroanatomy and neurophysiology components of the programme—so opted to major in Neuroscience.

"The neuroscience papers I especially enjoyed were neuroanatomy and neuropharmacology... The lab and practical work was outstanding," Frances explains.

But it was the neuropharmacology papers "which enabled me to decide exactly what area I would go into for my own postgrad master's research," she says.

Since graduating with her Master of Science (MSc) in pharmacology, Frances has been working as a medicines assessor at Medsafe—the New Zealand Medicines and Medical Devices Safety Authority. Her role involves assessing new medicine applications and analysing pharmaceutical chemical and clinical trial data to determine whether the medicine is safe, effective, and of the required quality to be distributed in New Zealand.

Frances says the scientific writing, analytical, and communication skills gained during her neuroscience studies have been invaluable in her career thus far. In future, she hopes to work onward and upward in her field, working in the medicines regulation industry or being involved in phase II and III clinical trials.