Otago’s Ms Charlotte Steel and Dr Erica Todd are among seven highly promising researchers at an early stage of their career to be awarded Rutherford fellowships and scholarships, the Royal Society Te Apārangi announced today.

Ms Charlotte Steel, who is finishing a BSc(Hons) in Neuroscience at Otago, receives a three-year Cambridge-Rutherford Memorial PhD Scholarship while Dr Erica Todd, a Department of Anatomy researcher in the Gemmell Lab, has gained a two-year New Zealand Postdoctoral Fellowship.

They are intended to provide full support to enable completion of a PhD at the University of Cambridge in pure or applied science. Dr Steel’s PhD project is titled “how protein misfolding can be prevented in neurodegenerative disease”. She will receive a living allowance of approximately £13,900 (indicative amount) per annum, and will have her course and college fees paid. In addition, she is eligible for one, non-transferable, return airfare between the United Kingdom and New Zealand per annum. 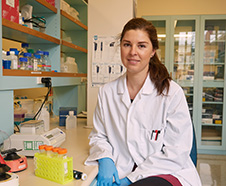 Dr Todd will investigate the “epigenetic regulation of sex change” in her postdoctoral research project. The fellowship, which aims to build human capability in science, technology, engineering and mathematics by providing early career support for the country’s brightest and most promising researchers, will provide funding to undertake two years postdoctoral research in New Zealand. Each year, the Fellow will receive a stipend of NZ$75,000. In addition a GST-inclusive fund is paid each year of NZ$10,000 to support direct and indirect research costs. Up to five are awarded nationally each year.

Details of the Otago recipients’ projects follows below:

About 60,000 New Zealanders currently suffer from dementia, and this number is expected to increase by 300% by 2050. Many of these neurodegenerative conditions, including Alzheimer’s, Parkinson’s and Huntington’s diseases, involve the deadly build-up of unfolded or misfolded proteins in brain cells. The resulting death of neurons leads to a progressive degeneration of brain function, which is ultimately fatal. There is no known cure for dementia, and current therapies are only able to treat the symptoms and not the underlying causes of disease.

At the University of Cambridge, Ms Charlotte Steel hopes to undertake a PhD research project in the Department of Clinical Neurosciences. She is interested in the work of an internationally recognised expert research team, led by Professor Mallucci, who specialise in understanding the common cellular processes involved in various neurodegenerative diseases. In particular, Ms. Steel is interested in the unfolded protein response, a protective pathway normally activated during cellular stress, which is detrimentally over-activated in the brains of patients with diseases such as Alzheimer’s. This over-activation causes cells to stop producing new proteins. However, re-initiating protein synthesis can prevent further neurodegeneration in a mouse model. Ms Steel is interested in investigating how certain compounds that re-induce protein production could be used to prevent the death of brain cells. In the future, such drugs could have the potential to treat, and even prevent, dementia.

Most plants and animals remain the same sex throughout life. Some, however, can change their sex as a normal part of their lifecycle. Natural sex change is very common in highly social species of reef fish, caused by changes in the group’s social structure and resulting in gonad restructuring and alternations in appearance and behaviour. The molecular underpinnings of this amazing transformation are not yet well understood. Recent research has linked environmental cues to DNA modifications that shape how genes are expressed, without changing their underlying genetic code – known as epigenetic modifications. This process is relevant to understanding how sex is determined at a molecular level as well as how the external environment can influence gene expression.

In this project, Dr Todd will use fish such as the spotty (Notolabrus celiodotus) and bluehead (Thalassoma bifasciatum) wrasse to study the genetic and environmental bases of sex change. These species are excellent models as manipulating captive social groups readily induces female to male sex change. Dr Todd will combine cutting edge, genome wide analysis of epigenetic DNA modifications and with measures of gene expression in the wrasses to explore how natural sex change is initiated and controlled. She will also examine how manipulating DNA modifications affects the sex change process. This research will advance our understanding of vertebrate sexual development and plasticity, and may also provide insights into human disorders of sexual development.