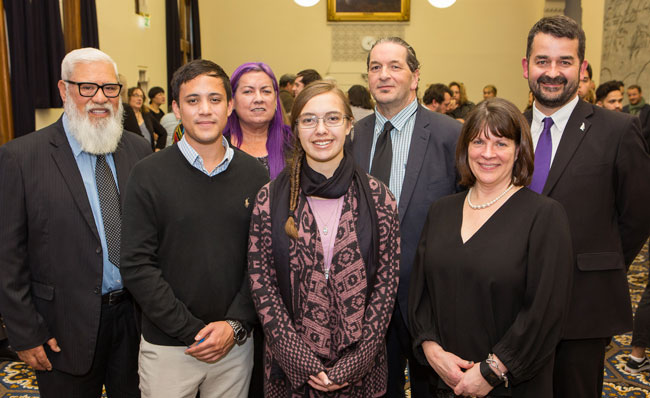 A new student exchange programme aimed at creating authentic relationships between indigenous students throughout the world launched in Dunedin on Wednesday.

Tūrangawaewae, Pōkai Whenua was founded by the Office of Māori Development and the International Office to help Māori students discover a passion for exploring other universities and indigenous communities.

By providing an immersive indigenous community-to-community knowledge exchange, the programme aims to grow an internationally experienced cohort of Māori students with links to other universities and their indigenous communities.

The reciprocal nature of the exchange means indigenous students from selected universities will have the opportunity to travel to Aotearoa/New Zealand to study and be nestled within local runaka in Otepoti/Dunedin.

Office of Māori Development director Tuari Potiki told the crowd in attendance at the University of Otago’s Council Chambers it was about creating an authentic experience for tauira Māori.

“When we were first talking about an indigenous student exchange, we knew it had to be done with local indigenous communities on board,” Mr Potiki said.

“It’s great that other universities and their indigenous communities are helping to create a new network of future indigenous leaders.”

International Office director Jason Cushen thanked Mr Potiki for an important collaboration that has created new relationships and strengthened others.

“Local Māori are an important partner in Tūrangawaewae, Pōkai Whenua, as are those indigenous communities of our partner universities, because for this to work as envisaged it has to be a truly collaborative arrangement,” Mr Cushen says.

The exchange programme’s first inbound student, Miranda Livers, told the crowd Tūrangawaewae, Pōkai Whenua had helped her connect with her own Cherokee identity at a deeper level.

“I am so proud of my Native heritage but up until now I haven’t had an opportunity to fully express this side of who I am.

“I believe this programme was delivered to me by my ancestors who said, ‘prove it’.”

For Barlow Anderson, of Ngati Rongomai, Tuhoe, Te Whakatohea, Ngati Manawa, Ngati Tahinga, Ngati Koata and Ngati Porou descent, the opportunity to be the first tauira Māori to participate was too good to turn down. He will attend Memorial University in Newfoundland, Canada in the second semester.

“At university we learn the theory around how indigenous communities operate,” Barlow said.

“The indigenous aspect of this exchange will allow me to put that theory into practice.”