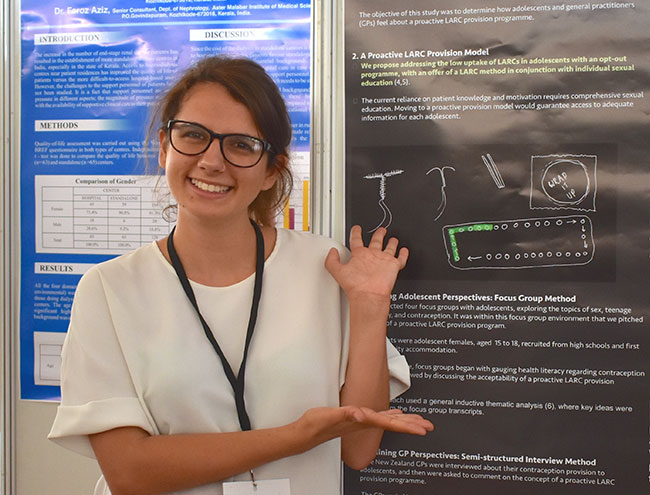 New Zealand adolescents have little knowledge of the most effective form of contraceptives, like implants and IUDs, and support the concept of an education programme about these long-acting reversible contraceptives to help prevent unintended teen pregnancies, University of Otago research has found.

In a paper published in the New Zealand Medical Journal today, researchers found most of the young women aged 14 to 18 interviewed knew little about implants like Jadelle and IUDs, despite the fact they are 22 times as effective as the oral contraceptive pill, the most commonly (25 per cent) used form of contraception among the participants.

Led by current medical and PhD student Rebecca Duncan under the supervision of Dr Helen Paterson from the Department of Women’s and Children’s Health, the research aimed to explore female adolescents’ opinions on contraceptive provision in New Zealand and to determine if they found an education programme about long-acting reversible contraceptives acceptable. Associate Professors Neil Pickering and Lynley Anderson from the Bioethics Centre in the Division of Health Sciences were also co-authors in the study.

Ms Duncan says 41 per cent of New Zealand adolescents aged 16 to 19 report having had sex with more than 90 per cent of adolescent pregnancies unintended.

Study participants varied in levels of contraceptive knowledge. They identified a lack of knowledge and also lack of time, money and other barriers limited their access to contraception.

The analysis showed these adolescents considered the main reasons for low use of these contraceptives were a lack of knowledge among health practitioners about their suitability among adolescents, adolescents not knowing of any peers using them (therefore not having a first person account of the experience) and fear of the unknown aspects of their use, like insertion of the implants or IUDs.

However, Dr Paterson says after being educated about the long-acting reversible contraceptives they considered them a reliable way to offer freedom from unintended pregnancy.

“It is often believed that adolescents would be unwilling to consider a long-acting reversible contraceptive, but our findings are in line with other research that concludes that what they offer and what young women want from contraception mean they are a suitable option.”

Ms Duncan says more research is needed to determine the acceptability of an education programme about long-acting reversible contraceptives among doctors, nurses, schools and parents.