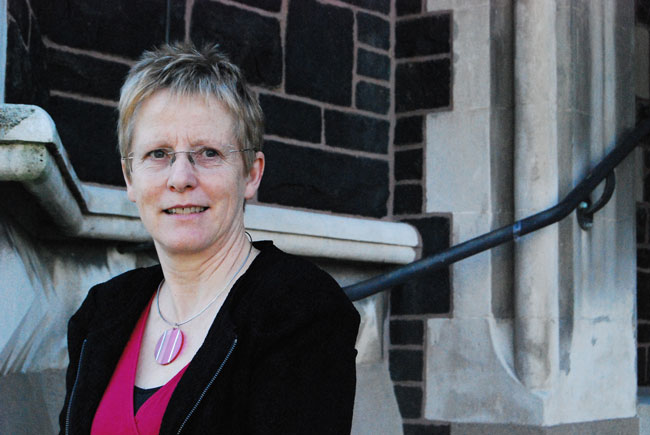 When Professor Helen Nicholson began her working life as a doctor in a Bristol hospital, she never imagined she would one day be leading a Division of External Engagement at a New Zealand university.

But Professor Nicholson has lived her life with an open attitude: “Doors open, you can choose to go through them or not,” she says.

Professor Nicholson was appointed to the role of Deputy Vice-Chancellor of the University’s newly created Division of External Engagement in June and moved into the Clocktower in late September.

From her new office overlooking the Quad, she is finding her feet leading this new Division which comprises Marketing & Communications, International, and Development & Alumni Relations. The Division was created to enhance the strategic direction of the University to focus on strong external engagement and she is key to making this happen.

"Our main goal is to raise the profile of the University and increase the number of high quality students coming to Otago, both domestic and international."

“Our main goal is to raise the profile of the University and increase the number of high quality students coming to Otago, both domestic and international,” she says. “To do this we need to make Otago more visible both in New Zealand and across the world.

“There is quite a bit of synergy across these three areas and I hope bringing them together into this new Division will mean we can leverage off each other’s expertise and contacts.”

She says one example of how this would work is the overlap between Alumni and International.

“As the Pro-Vice-Chancellor (International) I headed up some of the overseas Alumni events, including one in Glasgow. When I was there I met some of the young alumni working there. These people were in their late 20s, and not in a position to give financially, but they were willing to help in other ways.

“One of the best ways to attract students is word of mouth, and these young people are so positive and enthusiastic about Otago. I think we can do more in terms of working with our graduates across the world.”

Professor Nicholson says there are comparable synergies between Alumni and Web Services and other parts of the new Division.

“We are in a financially constrained period. In an ideal world we would increase staff numbers, but right now the best thing we can do is come together as a team and work effectively to share our expertise.”

The challenge is bringing the new Division together – three different groups with quite different cultures – whilst maintaining each group’s identity.

“Helping people to see they can share their expertise without being taken over is important, as well as making sure we have the right structures in place.”

"Strategic leadership is about understanding the environment, the challenges and the team and being able to take them to the next step."

Professor Nicholson brings a background of academic leadership as well as biomedical and health sciences expertise to the role. She came to Otago in 2000 to become Professor of Anatomy and subsequently became head of the Department of Anatomy. In 2007 she was appointed Dean of the Otago School of Medical Sciences and in 2011 was the Acting Deputy Vice-Chancellor (Research and Enterprise) for six months. In February 2014 she was appointed to the role of Pro-Vice-Chancellor (International).

While leading this new Division is a large leap from where she started out, the individual steps have been small, and once in a senior management position says she realised how much she enjoys working with people and making a difference.

The first step in her latest role has been meeting everyone, and to this end she has set up one-on-one meetings with each and every staff member in the new Division. While this is time consuming, for Professor Nicholson it is a vital part of her leadership.

“It’s important for me to understand what people do and how they fit into the bigger picture. I did the same thing when I joined International.

“Strategic leadership is about understanding the environment, the challenges and the team and being able to take them to the next step. It’s about trying to make people comfortable with change. We all have to change, but it can be a scary business.”