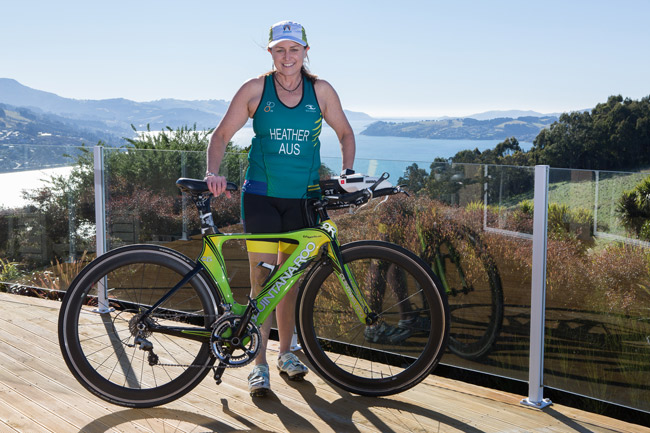 Although Professor Heather, who moved to New Zealand in 2014 to take up her role at Otago, has been competing in this country, she does not meet the residency requirements for being selected into the New Zealand team. So, she says after her summer season of racing she applied for entry into the Australian team as an Australian living overseas.

“This is a dream I have had for a long time and when I was selected I was absolutely over the moon,” she says.

"This is a dream I have had for a long time and when I was selected I was absolutely over the moon."

Selection is tough: She had to complete the equivalent of five half ironman distance races (2km swim, 90km cycle, 21km run) over the 2016/2017 summer season. And the event is even tougher. The long course triathlon will see her swim 3km, cycle 120km, and run 30km.

Alongside her sporting successes, Dr Heather is a world-leading researcher.

Her work focuses on how the sex hormones – estrogen and testosterone – affect non-reproductive tissues in the body. Primarily, she looks at how these sex hormones promote the calcification of atherosclerotic plaques which cause heart attacks and strokes.

Her research team aims to improve the understanding and safety of hormone replacement treatment use. It also develops bioassays for the detection of designer androgens and estrogens that are used as doping agents in sports.

Last year she won the University’s $50,000 Translational Research Grant to assist her to develop a new diagnostic test for recurring breast cancer.

Finding the time to train at a professional level and lead this cutting-edge science has been difficult, she says. Training for an event like the long course triathlon requires more than 20 hours of training per week.

“So this means I am getting up early in the mornings and putting in a lot of hours on the weekend. It has been challenging because of the weather conditions over the cold Dunedin winter. I have spent a lot of time on the indoor cycle trainer and swimming at Moana Pool.”

"It has been challenging because of the weather conditions over the cold Dunedin winter. I have spent a lot of time on the indoor cycle trainer and swimming at Moana Pool."

Professor Heather’s sporting background is ultra-marathons, specialising in 100km events in Australia, and normally placing in the top 10 of open/masters women). In 2009 she took up triathlons, and has so far completed nine full Ironman distance events.

Professor Heather says she’s both nervous and excited about the upcoming event.

And while she is representing the nation which is our biggest sporting rival – we’re sure Bulletin readers from across the University wish her the very best.