It is estimated that arthritis costs the New Zealand health-care system more than $700 million each year. The University’s Arthritis Research Theme is bringing together researchers to help find ways to improve the lives of the growing number of New Zealanders affected by this condition. 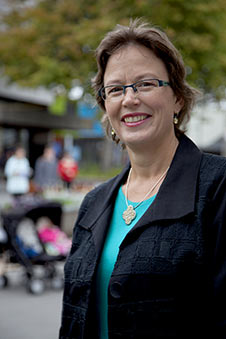 Imagine not being able to dress yourself or to turn on a tap to brush your teeth. Imagine waking daily to debilitating pain.

This is what life is like for many people affected by arthritis.

More than half-a-million New Zealanders suffer from one of a wide range of conditions covered by the term “arthritis”, including osteoarthritis, gout and ankylosing spondylitis.

While not all arthritis sufferers are elderly, as our population ages the number of sufferers is increasing – as is the cost to society. An economic study commissioned in 2010 by Arthritis New Zealand found that the annual health-care costs for arthritis conditions totalled almost $700 million.

Director, Christchurch-based Professor Lisa Stamp, says the establishment of the Arthritis Research Theme is a constructive and practical development for people with arthritis. “It not only highlights the significant amount of internationally-recognised research being done across the University into all forms of arthritis, but also encourages further clinical research in an area that affects so many New Zealanders and millions more worldwide.”

Researchers are working on providing answers to some of the key challenges faced by doctors treating patients with arthritis. Their work spans genetic studies, assessing the risk of developing rheumatic diseases such as rheumatoid arthritis, gout and spondyloarthritis; pharmacogenomic studies, predicting responses to different drugs; through to basic science laboratory studies of the pathophysiology of inflammatory arthritis. There are also a number of clinical studies including the development of outcome measures and therapeutic clinical trials.

Stamp says the ultimate aim of Theme members is to improve outcomes for those living with the painful and crippling condition.

“There is no cure for arthritis so a lot of our work focuses on how to best treat people and ways to minimise their suffering.’’

Stamp’s own research interests include how to tailor drug treatments for rheumatic conditions such as gout and rheumatoid arthritis (RA) for individual patients. One of her findings – that doses of the standard gout drug, Allopurinol, could be safely lifted above existing clinical guidelines to effectively manage the disease in some patients – has had a significant impact on clinical practice. Another – showing that measuring blood levels of the commonly-used drug Methotrexate in RA patients is not useful in telling how well the disease is being controlled – has also been internationally influential.

Practical research outputs such as these are likely to increase as the Theme matures.

Stamp cites a study on smoking as an example of hands-on work already being undertaken.

“A laboratory-based project examining the effects of cigarette smoking on the inflammation in the joints of RA patients has now been extended to a clinical study funded by the Health Research Council, investigating why RA patients find it difficult to stop smoking. In collaboration with Arthritis New Zealand, we are piloting a smoke-stop programme developed specifically for people with RA. The laboratory study indicated that an increase in some inflammatory genes in the joint tissue of smokers returned to normal after the patient stopped smoking, suggesting there may be direct benefits to quitting.’’

Other projects include studies looking at:

Dunedin-based Associate Professor Tony Merriman, whose work revolves around the genetics ofarthritis, believes one of the biggest benefits of the Theme is bringing together researchers with different areas of expertise.

“A lot of the work by Theme members focuses on how to make life better for people with arthritis. The genetics research is understanding what is causing it. Both these things are important and complement each other perfectly.

“Gene researchers have found that 60 to 70 per cent of the reason people either get rheumatoid arthritis, or not, is due to their genes. One example is the CTLA4 gene, which has been found to be a factor in rheumatoid arthritis. This gene is being targeted with a drug called Abatacept to prevent or alleviate the condition. Genetics just gives us more information about what’s going on in the body.’’

Another benefit, says Merriman, is regular meetings, bringing together researchers from University of Otago centres around the country.

“I’m involved in an international study on the relatively rare condition of giant cell arteritis. There’ve been very few genetic studies done on it and, for gene studies, you need thousands of people. I did a presentation on this study at a Theme meeting and lots of people there put their hands up and said ‘I’ll get involved’. Because of that buy-in, New Zealand is now going to provide 500 of the 2,000 samples from Australasia.’’

Merriman says he and Theme colleagues, including Stamp, are also involved in work on more common arthritic conditions, such as gout.

“In one gout study we are looking at how genes and the environment work together in that condition. Sugary drinks and alcohol raise uric acid levels which lead to painful attacks. We’ve found that a particular gene is important in helping the kidney get rid of uric acid.

“There are two versions of this gene, one good at getting rid of the acid and the other which is not. Interestingly, we’ve found that if people have the good version of the gene but drink more than a litre of sugary drink a day, they can reverse the effect of the good gene version. It’s very practical stuff, as well as improving our understanding.’’

Merriman is a mid-career researcher who is getting recognition on the world stage for his work. Likewise, Stamp has hit her career stride and has many years of productive work in front of her, but there are researchers at all career stages involved in the Theme.

“Professor John Highton is a very senior researcher who has driven rheumatology research at the University since the mid-’70s and has trained a number of the other Theme members,” says Stamp.

“Rheumatology research at the University of Otago, and in New Zealand generally, has been greatly strengthened in recent years by enthusiastic and productive mid- and early-career researchers. These researchers are providing a foundation for the Theme to increase research collaborations across departments and faculties within the University, including the strong support of postgraduate student study.’’

Supporting early-career researchers is also a key focus, Stamp says. “Students are an integral part of Theme activities. We have a number of students pursuing PhD and master’s thesis research. Bachelor of Medical Science students are also involved. In addition, the Theme completed its first year by sponsoring two summer students who under took a 10-week arthritis-related research project.

“Student involvement is critical to the on going success of the Theme. They are the next generation of researchers and we need to stimulate interest and energy for them to continue in finding answers to important questions about rheumatology.’’