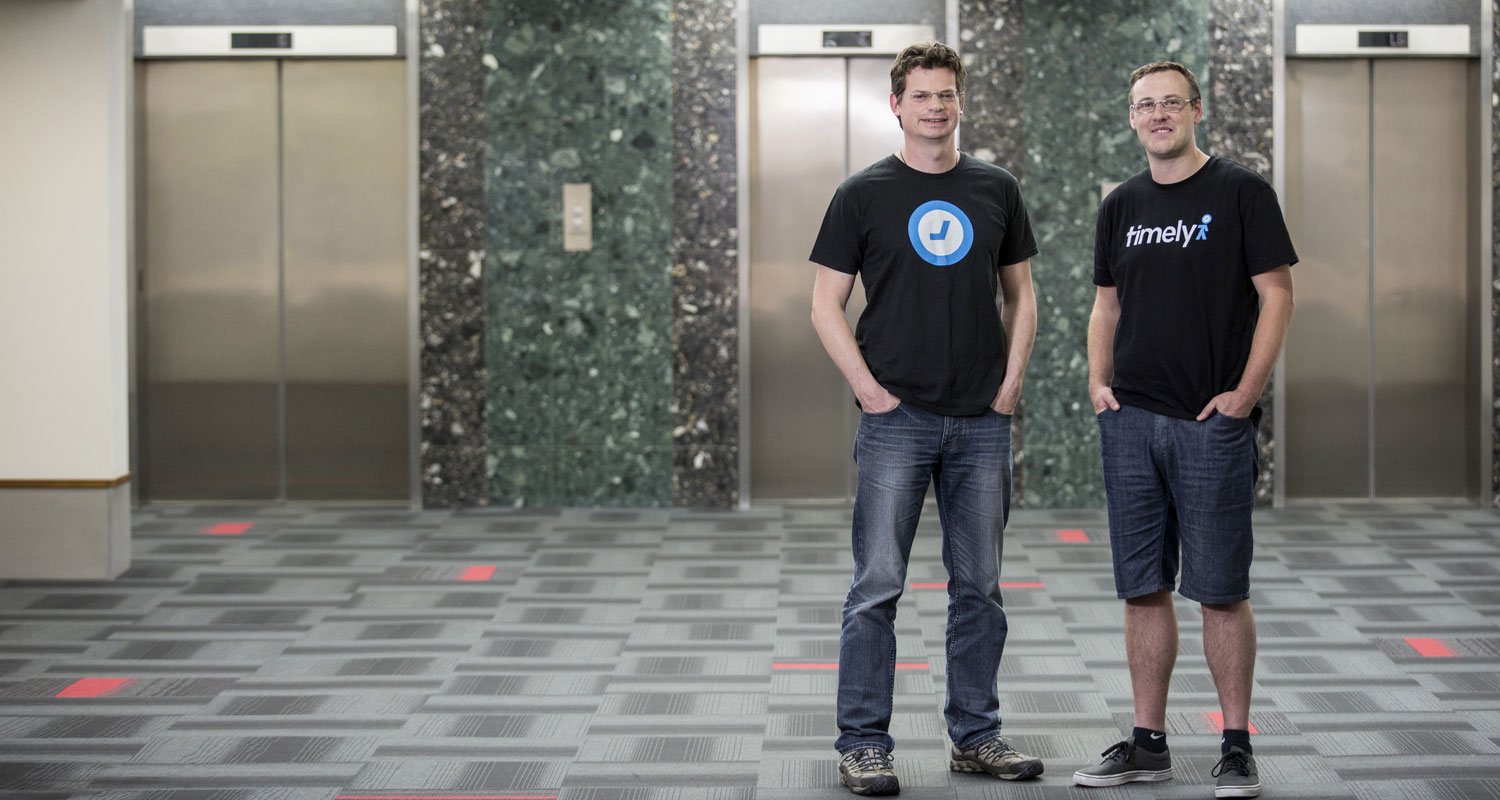 Otago alumni are behind the fast-growing New Zealand software business Timely, that is helping businesses around the world to fill their appointment books.

Once a tech entrepreneur, always a tech entrepreneur: that’s what Otago alumni and business partners Ryan Baker and Andrew Schofield discovered not long after their first successful tech start-up was acquired by Trade Me in 2010.

Now at the helm of their second venture, Timely, an appointment scheduling software firm, the entrepreneurs say that New Zealand offers a host of benefits for people wanting to create and grow successful high-tech companies – not the least of which is a rich source of qualified graduates from the University of Otago and other New Zealand universities.

“Today, there are no limitations to being at the bottom of the world,” says Baker, CEO of the Dunedin company. “We can be competitive and serve markets anywhere. In fact, Timely has been international from day one, with customers from Australia to Afghanistan.”

A cloud-based solution, Timely is a scheduling platform used primarily by small businesses in the health and beauty sector – hair salons, day spas, personal trainers, fitness studios and the like – for appointment booking, customer contact management, staff scheduling and more. From its launch in late 2012, the business has expanded rapidly and today has more than 4000 customers in 70 countries and is growing, on average, by 10 per cent a month.

“Timely wasn’t the first product in the appointment scheduling space, but we took it to the next level, creating a full-featured, reliable and affordable solution for small businesses,” says Baker, adding that a cloud-based software service has proven to be a natural fit for Timely’s target market, allowing small business customers to access the software using existing hardware and devices – tablets, PCs, Macs or smartphones – without incurring additional costs.

Baker and Schofield (Timely’s chief technology officer) had experience entering and succeeding in established markets: they started the accommodation booking service BookIt.co.nz in 2003, building it into a thriving online entity based in Dunedin before being acquired by Trade Me in 2010.

At that time, Schofield was working with Ian Taylor, of Taylormade Productions/Animation Research Ltd, trying to get the new online tourism booking business started.

“I needed another developer to help build the software and Ryan was one of the candidates that applied. We clicked at that first interview,” Schofield explains. “Ian, Ryan and I went on to found BookIt together and built it up over seven years before selling it to Trade Me.”

The duo went to work for the online auction site until early 2012, leaving on excellent terms with their Trade Me bosses after their two-year, post-acquisition contract was up.

“If you have to work for someone else, then Trade Me is the company to work for. We learned so much there,” says Baker, noting that working for the company at the time they went public was particularly exciting and educational.

“It wasn’t just the technology, but the management style and human resources side of things. Managers let people do their work. They created a culture where people wanted to be part of something bigger, to make a contribution and we aim to achieve something similar at Timely.”

Baker and Schofield’s own corporate culture model has been to make Timely a remote-working organisation. That means there’s no head office –indeed, no offices at all. Staff work from home or, if they prefer, from co-working spaces, connecting with managers, co-workers and customers virtually, while whole company meetings are held at salubrious venues in Queenstown or Auckland semi-annually.

“We were a remote company right from the start. I stayed in Dunedin because I like the lifestyle here and Andrew moved to Wellington. After a year, we realised it was not a phase, it was an arrangement that worked for us, so we have kept that model and grown from there,” Baker says.

Of Timely’s 27 staff – 11 of whom are University of Otago graduates – 15 are based in Dunedin, eight in Wellington and two in Auckland.

And while Timely is not quite Trade Me yet, the executive team believes there is ample room for growth and few barriers to expansion.

“We have an obsession with building a highly-polished product, providing great customer service and sticking to business fundamentals,” Schofield says. “And we promote an open and honest culture.”

They both agree that their education and experience at the University of Otago and their early years working with Ian Taylor have been critical to their success as technology entrepreneurs.

“The Otago computer science degree introduces you to the full stack of computing, from hardware to end-user interfaces,” explains Schofield. “You’re taught how to solve tricky problems by using a methodical, data-driven approach. These skills can be applied in both software development and business.

“Having a degree from Otago – especially a computer science degree – is definitely a big tick in my book.”

With the mission statement For alumni, by alumni, the University of Otago’s China Alumni Network is bringing together Otago graduates - and welcoming others who have studied in New Zealand - for informative and engaging gatherings that are fun, benefit graduates and raise the University’s profile in China.

“Once Chinese students have come home, they like to mix with others who have studied abroad,” says Central Otago native Hunter McGregor, who has lived in China since 2007 and initiated the network. “Our approach is to arrange informal gatherings on a regular basis, as opposed to just a big event once a year. This will get more people out to network and socialise. It’s more relaxed, which is the Kiwi way.”

A six-member alumni network board, based in Shanghai, is spearheading efforts to help University of Otago alumni to connect in China. Here’s a snapshot of who they are and why they are involved.

Hunter McGregor (36), BCom (Marketing 2001). Hunter operates a consulting and import business, Rata Forest Ltd. He helped initiative the alumni network in Shanghai, after moving there in 2007. “Seeing the network grow and getting to meet new people has been the best thing about getting involved,” he says.

Cynthia Feng (27), BCom (Accounting 2010). Cynthia works as a research analyst with executive search firm Spencer Stuart. She thinks of the alumni network as a community where people feel comfortable, sharing their insights and resources to help others who are new to China. “I want to see our network and resources grow so that we can offer help to new graduates and create a legacy where one generation of graduates helps the next generation,” Cynthia explains. “And on an extremely positive note: I met the love of my life at an alumni event.”

Ding Yi (25), BCom (Accounting 2014). Recent graduate Ding Yi also works as a research analyst at Spencer Stuart. “I volunteered at the International Office back at the uni and I was actively looking for an alumni group to get involved with once I got back to Shanghai,” says Ding who counts the Rugby World Cup 2011 as a highlight of her years at Otago. “It is great to have a group of people here with a similar background, supporting each other.”

Sabrina Li (37), BCom (Information Science 2002). Sabrina is a fund services operations and accounting manager, who says memories of the fun and laughter she enjoyed while living at Toroa College motivated her to get involved in the alumni network: “I’d like to help promote the University of Otago here and to make the name better known and influential here. I also enjoy expanding my own social network.”

Daniel Zhang (28), BSc (Computer Science 2010). Web specialist Daniel was thrilled to connect with the alumni network just one week after shifting to Shanghai. “I’m very keen to reconnect and to help more people to reunite,” explains Daniel, who is helping to create the China Alumni Network’s web presence.

Joby Barham (36), BA (Design 2001). Working as a landscape architect and developing a science and design school with his wife in Shanghai keeps Joby, originally from Christchurch, busy – but never too busy to maintain connections and build a social and business network. “Networking is critical for foreigners in China and the alumni network is a great way to develop relationships and reconnect with fellow alumni,” he says.

The China Alumni Network welcomes graduates and others interested in connection with graduates to get in touch: (WeChat ID: Otago_Alumni).