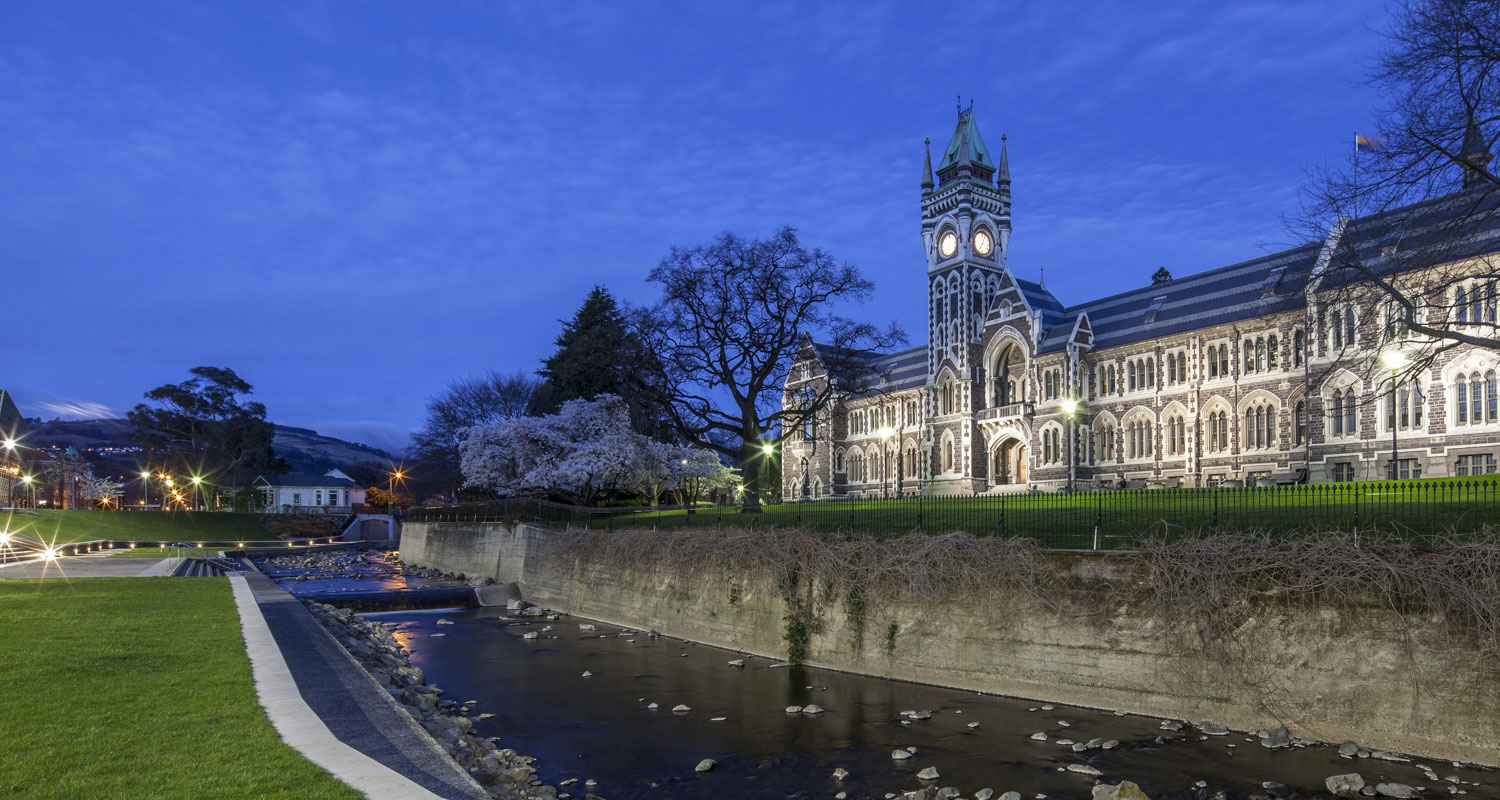 The University has been awarded the highest quality rating of five stars plus from QS stars, a quality evaluation system in which universities are assigned a stars rating based upon their performance in an institution-wide review.

The five star plus rating is awarded to universities described by QS as “an institution [that] is not just world-class, but an elite destination to which the very best students and faculty worldwide will aspire”.

The University of Otago was audited across a broad range of criteria, and scored especially highly in teaching, employability, research, internationalisation, facilities, innovation and inclusiveness.

Te Papa and the University of Otago have signed a collaborative relationship to strengthen joint efforts in research, scholarships, teaching and public lectures involving the national facility.

The memorandum of understanding (MoU), signed between senior staff and academics at the University and the Museum of New Zealand Te Papa Tongarewa, is designed to achieve better outcomes in education and research.

Deputy Vice-Chancellor (Research) Professor Richard Blaikie says he is looking forward to a long and fruitful relationship – one that complements the existing strong ties that the University has with the Otago Museum and also the strong ties that Te Papa has with other research organisations.

“The MoU is significant for the opportunities it creates for engagement with Te Papa across a number of our academic divisions but, principally, across the Humanities and in Science Communication, where both organisations share international strengths.” 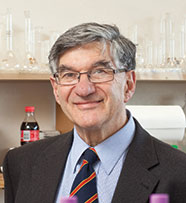 Innovative research aimed at significantly reducing the death and disease burden of some of New Zealand’s leading health problems will be pursued through the Healthier Lives National Science Challenge.

Hosted by the University of Otago and involving partners from six other New Zealand universities and three research institutes, the challenge will tackle cardiovascular disease, cancer, diabetes and obesity with the goal of reducing their overall burden by 25 per cent by 2025.

The director of Healthier Lives, Professor Jim Mann, says that this group of diseases accounts for a majority of premature deaths and much of the burden of serious illness among women and men in the prime of life, as well as the stark inequalities in health outcomes amongst Māori and Pacific peoples compared to other New Zealanders.

Research aimed at reducing these inequalitieswill be a major thrust of the challenge and will involve initiatives led by Māori researchers with strong community involvement.

Healthier Lives is the latest National Science Challenge to be unveiled by the Government. The Challenges are initiated through the Ministry of Business, Innovation and Employment, and are designed to tackle New Zealand’s biggest science-based issues and opportunities. 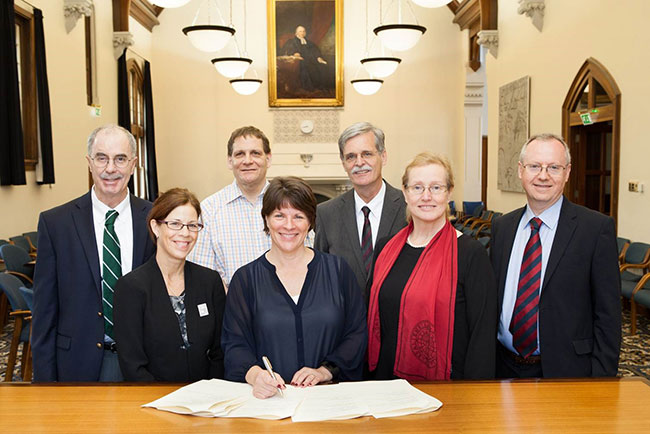 A second memorandum of understanding (MoU) between the universities in the Matariki Network of Universities was signed at a meeting of the network’s executive committee, hosted by Otago in February.

The Matariki Network is an international group of seven leading, like-minded universities, each among themost historic in its own country, and recognised as being leaders in both teaching and research.

University of Otago Deputy Vice-Chancellor (External Engagement) Professor Helen Nicholson says the first MoU, signed in February 2011, enabled Matariki members to become trusted partners who support each other to enhance quality in all areas of institutional activity. “This MoU cements these relationships and demonstrates our willingness to continue working together.”

The University of Otago is joining forces with Queen’s University in Canada to collaborate on research aimed at enhancing veterans’ health.

The two universities have signed a memorandum of understanding (MoU) that provides a framework for researchers from Otago’s Health of Veterans, Serving Personnel and their Families research theme, and Queen’s Canadian Institute for Military and Veteran Health Research to work closely together on specific research initiatives.

Professor Richard Blaikie says signing the MOU is a significant milestone for the veterans’ research theme and will help secure its position nationally and internationally as the key centre for this area of research in New Zealand.

More than $11.7 million in new government funding has been awarded to University of Otago researchers to undertake 20 world-class research projects pushing the boundaries of knowledge in their fields.

Researchers from across the University will lead the new projects, which include 13 standard projects and seven “Fast-Starts” designed to support outstanding early-career researchers.

Professor Richard Blaikie warmly congratulated the Otago recipients on their success in the prestigious funding round.

“The Marsden Fund is extremely competitive and is designed to encourage work of the highest quality on topics of great value. I am delighted that the excellence of our researchers’ proposals has been recognised and their world-leading studies supported.”

University of Otago researchers have been awarded grants to pursue six research projects in the latest annual National Heart Foundation funding round.

They include studies into:

A number of the projects are being led by researchers in the Department of Medicine at the University of Otago, Christchurch, which hosts the world-leading Christchurch Heart Institute.

The new programmes are being supported through the Hazards and Infrastructure Research, High-Value Manufacturing and Services Research, and Smart Ideas funds administered by the Ministry of Business, Innovation and Employment. 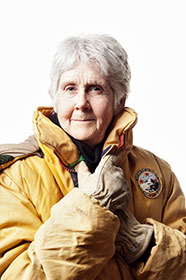 University of Otago physicist Professor Pat Langhorne has been allocated $1.9 million by the Deep South National Science Challenge to lead a research project on Antarctic sea ice, which is a key element in the global climate system. The Deep South Challenge is one of 11 MBIE-funded challenges to take a more strategic approach to science investment. Langhorne’s project, “Targeted observation and process-informed modelling of Antarctic sea ice”, is among the first Deep South funding allocations that will see over $9 million spent on six projects over four years. 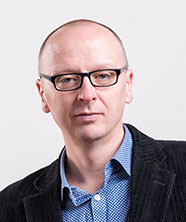 A book by Professor Tony Ballantyne (History), Entanglements of Empire: Missionaries, Māori and the Question of Body, has won the inaugural W.H. Oliver Award for the best book published on New Zealand History from the New Zealand Historical Association.

Associate Professor Ruth Fitzgerald (Anthropology and Archaeology) was recently awarded the Te Rangi Hiroa Medal by the Royal Society of New Zealand, recognising her work as a medical anthropologist that has placed many health issues such as genetic testing, reproductive decisions and oral health in a New Zealand social and political context.

Professor Jonathan Waters (Zoology) is among 12 top New Zealand researchers and scholars recently elected as a Fellow of the Royal Society of New Zealand. Waters is an evolutionary biologist working at the interface between previously distinct fields: genetics and geology; marine ecology and oceanography; and ancient DNA and archaeology.

Dr Roslyn Kemp (Microbiology and Immunology) was the 2015 winner of the Association for Women in the Sciences Miriam Dell Award for her work inspiring female immunologists across Australasia. The recognition stems from her work with students and for furthering the goals of the Women’s Initiative of the Australasian Society for Immunology. 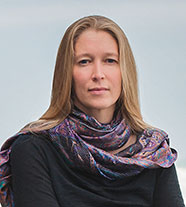 Dr Christina Riesselman (Geology and Marine Science) was awarded the inaugural L’Oréal-UNESCO For Women in Science New Zealand Fellowship. This comes with a $25,000 grant that Riesselman will use to study marine sediment cores that carry east Antarctica’s climate record of the past 11,000 years.

In recognition of his outstanding and significant contribution to pharmacy in New Zealand over the past 50 years, John Fraser, a professional practice fellow in the School of Pharmacy, was made a Fellow of the Royal Pharmaceutical Society of New Zealand. 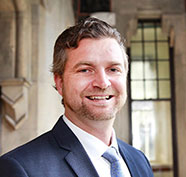 Mr Stephen Willis has been appointed the University’s new Chief Operating Officer (COO). The appointment takes effect from 11 April 2016 – the retirement date of long-time COO John Patrick. Manager of the Capital Project Unit at the University for the past six months, Willis has an extensive 14-year background in management and property development at Mater Health Services, a large not-for-profit private health services company in Queensland, Australia.

The University of Otago has appointed Dr Stephen Scott to the new position of Director of First-Year Experience. The aim is to enhance the transition of students from school to the University, to optimise their chance of success in a new learning environment.

Mr Simon Chu has been appointed as the University of Otago's Director of International, responsible for advancing the University’s global visibility and reputation and ensuring that Otago is a leading destination for international students.

Alumni and academic staff recognised in the New Year Honours include:

Emeritus Professor David Stewart (82). Initially coming to Dunedin as an associate professor in 1971, he held several senior roles during his years at Otago including Dean of the Otago Medical School, head of the Faculty of Medicine, and Assistant Vice-Chancellor (Health Sciences) from 1991–1998.