The remarkable sharing of Woolshed Bay

The remarkable sharing of Woolshed Bay

Queenstown farmers Dick and Jillian Jardine have gifted their Woolshed Bay home and property to the University of Otago to be used as a research retreat.

Say “Otago” and “University” and the institution’s iconic Clocktower building on the banks of the Leith springs to mind – but now, thanks to the generosity of a Queenstown farming family, it will also be linked with a spectacular high country homestead on the shores of Lake Wakatipu.

In late 2016, Remarkables Station owners Jillian and Dick Jardine gifted their four-hectare Woolshed Bay property to the University of Otago’s Foundation Trust, including the old shearers’ quarters and a magnificent Woolshed house.

The Woolshed house sits only metres from Lake Wakatipu and is surrounded by beautiful gardens, which have become a haven for native birds.

With spectacular 180-degree lake and mountain views – from the Remarkables to Cecil Peak and beyond – the property has many features, including a productive olive grove and a miniature vineyard. It is situated in a microclimate which allows even cold-sensitive plants such as feijoas, lemons and limes to grow. A step from the kitchen door is a large potager – abundant with berries, stone fruits, espaliered French pears, and overflowing with vegetables, herbs and flowers.

Adventure activities such as skydiving, windsurfing, rock climbing, biking, fishing and hiking all take place nearby on the station.

Since 1922 the Jardine family have farmed in the Wakatipu area, including the land of Kawarau Falls and Lochlinnie Stations. This was once a part of an extensive merino sheep run farmed by William Rees, an early European settler, Wakatipu explorer and surveyor who brought large-scale pastoralism to the area in the early 1860s. On Remarkables Station, the Jardines have farmed sheep, cattle and, more recently, deer.

Dick and Jillian Jardine took over Remarkables Station 32 years ago, living in the homestead on the eastern side of the station until the 1990s when they moved to Woolshed Bay. There they created a home from a collection of old huts and the shearers’ quarters, before moving into the transformed and historic woolshed.

During this time, the couple established the landscape which would attract native birds.

Reputedly used by Rees himself, this woolshed was an essential part of high-country farming life, big enough to hold about 800 woolly ewes. With no road and no Kawarau Bridge, the steamship Earnslaw linked the property to the outside world. While the steamer today ferries tourists around Lake Wakatipu, her cargo then included sheep, cattle and supplies. The boat would dock at the nearby jetty to transport wool from the station to Kingston and on to market – the jetty posts are still visible from the homestead.

In more recent years the old woolshed was also a place where shearers cooked and staff lived, and it became a temporary happy house for a Glenorchy family forced to leave their home by the 1999 historic flood of Wakatipu. The lake rose two metres, but the woolshed remained high and dry.

However, Jillian had a vision for the woolshed and employed a talented draughtsman and creative builders who worked with her to make this vision a reality: by 2007 the old woolshed had become an extraordinary home.

The new house follows the footprint of the old shed, with some materials salvaged for re-use. Tin and shingle from the original roof now line the ceiling high above the foyer, featuring a suspended glass walkway above the art gallery. Old gratings have been repurposed into shutters and floors. Timbers still bear graffiti scribblings by rousies, and recycled jarrah beams and flooring were obtained from Perth. Local stones have been set in concrete and old telephone poles provide structure in the living room. Recycled metal is comfortably juxtaposed with modern steel and glass. 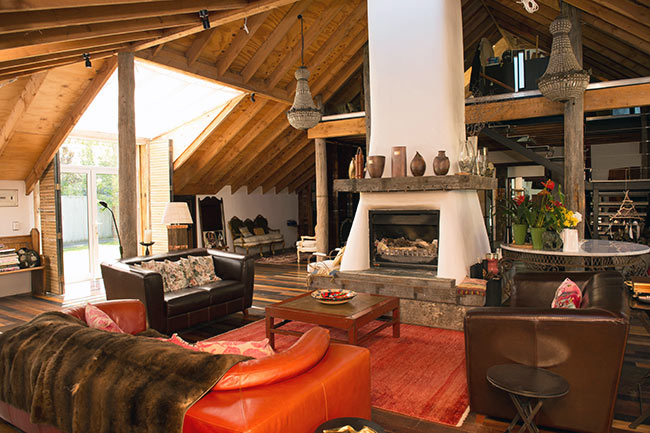 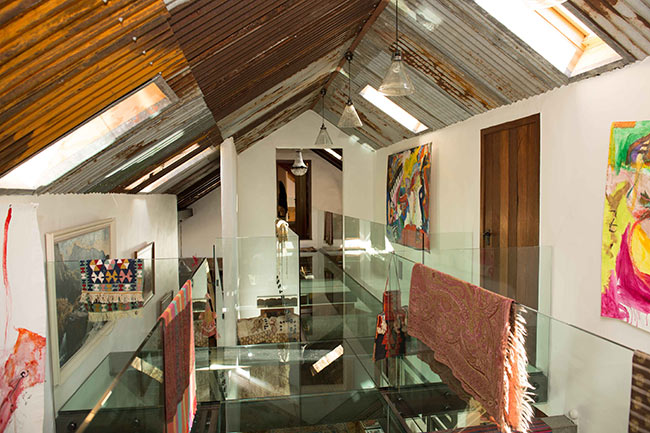 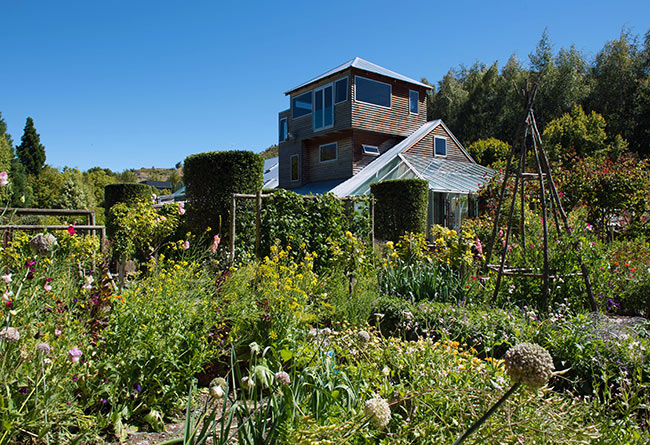 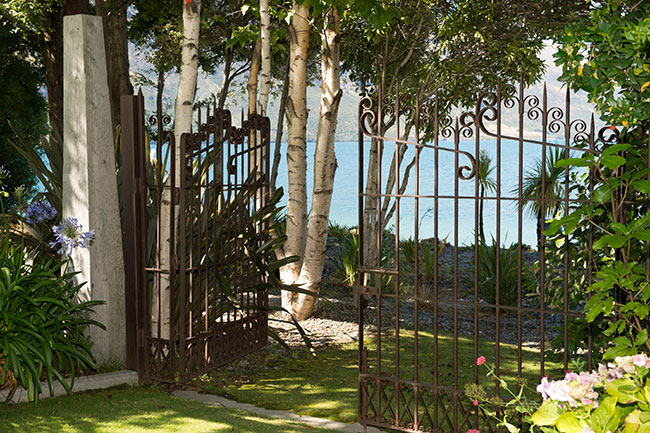 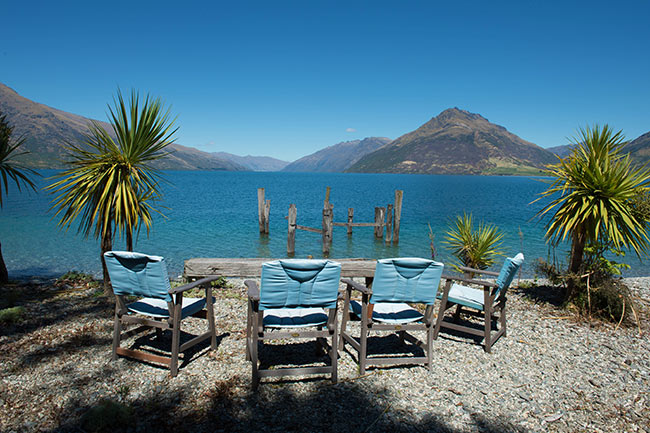 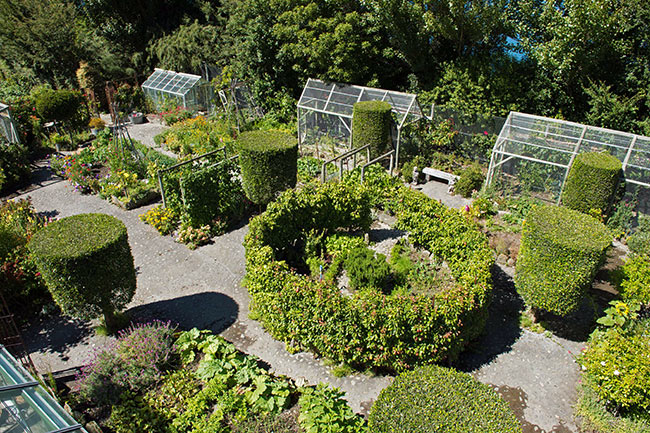 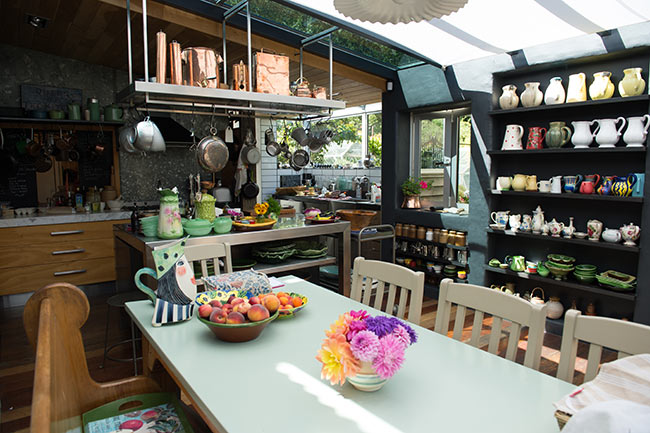 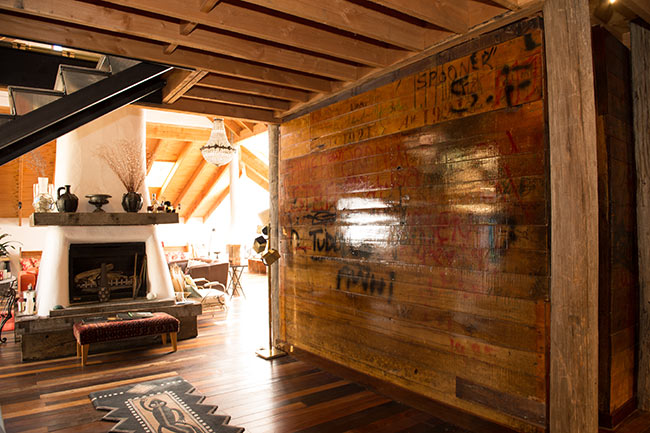 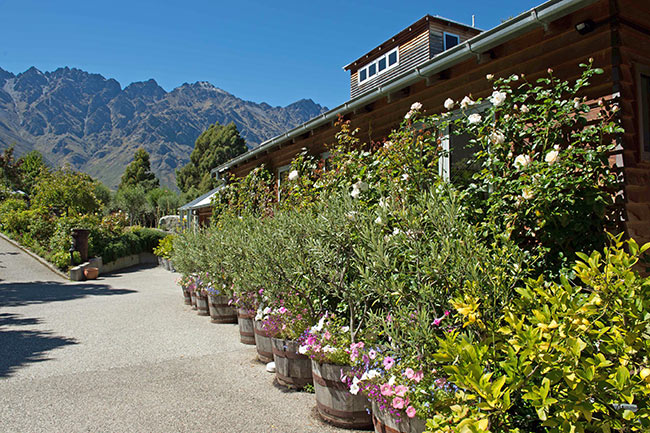 True to its origins, this beautiful homestead reflects enterprise, imagination and hard work. It is also a place where guests from all walks of life are made welcome, where the past has been preserved but not frozen in time. It is a comfortable and social place, with large spaces and secret corners, an ideal place to think and to share and to discuss – a very special place that the Jardines want to preserve.

"The Wakatipu has been very good to our family for several generations and this gift to the University of Otago is our way of acknowledging that,” they explain.

“The area is changing so quickly: we wanted to secure the future and integrity of the land and buildings."

The Jardines wanted Woolshed Bay to carry on its story, growing into its full potential. They have long admired the world-class research undertaken by the
University of Otago, particularly in medical fields, and wanted to help the
University fulfil its wider vision of producing research that benefits our country and the world. Thus, the idea of using Woolshed Bay as a research retreat was slowly born.

University of Otago Vice-Chancellor Professor Harlene Hayne describes the donation as “one of the most significant gifts Otago has received” and says the
University is looking forward to working with the Jardine family to develop their vision for the property.

“Leading researchers could come from all over the world to spend a week or two together to debate, discuss and present data to solve the world’s big problems. It will give them access to an extremely valuable, but intangible, commodity – time."

“Leaving the hubbub of your email, the phone, students and research laboratory for a place where you can literally get away from everything will provide an unprecedented opportunity for researchers to get the time they need to take the next step in their work.”

Professor Hayne says Otago is very aware of the Jardines’ “leap of faith” in entrusting care of the property to the University, which is even more remarkable as the Jardines are not alumni, but have always admired the work of the University. “The gift is very personal because it is a home they have created with their own hands. Although it would have considerable value in commercial terms, the family’s vision – which the University shares – is that the property be held in perpetuity.

“This illustrates their desire for stewardship and, as is the case with all our gifts, the University is absolutely committed to protecting both their vision for its use and the special nature of the property for many years to come,” says the Vice-Chancellor.

“This is an extraordinary gesture and Otago feels very privileged to be charged with its future preservation, as well as making the most of the opportunities that prevail. We have received many positive comments about this gift: the response has been overwhelming.”

While the homestead is "absolutely perfect" for use in the short-term, Mr Ward says there is scope for development as future needs are ascertained. “The University is continuing to explore several strategic opportunities for further involvement in the area and this wonderful gesture provides us with another catalyst.”

The Jardines have donated another special part of Remarkables Station to the QEII Trust – the Jardine Boulder Field, gifted for community use to "protect its uniqueness". World-renowned, its bus-sized boulders, good access roads and dramatic surroundings have made it a popular tourism and rock-climbing destination.

Dick and Jillian will leave their Woolshed Bay home and property with pride and pleasure.