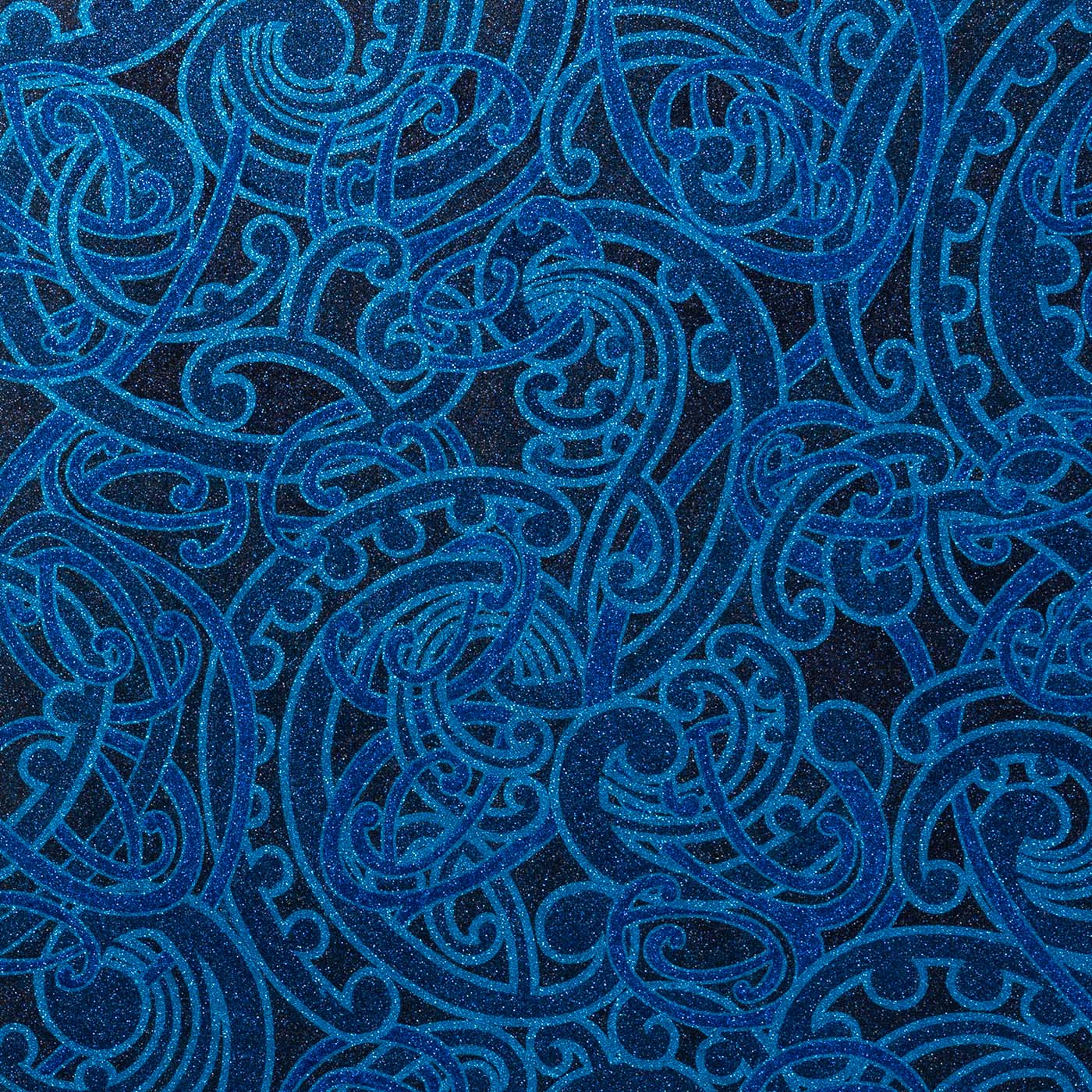 The works of three significant contemporary Māori artists have been added to the University of Otago’s Hocken Collections.

There was a time when Māori art in public art galleries and collections was more likely to involve Māori as subjects than as makers.

Hocken Head Curator, Pictorial Collections, Robyn Notman, cites as one example the Hocken’s oil painting, The New Zealand Chiefs in Wesley’s House, featuring a Europeanised portrayal by an English artist, James Smetham, of 13 Māori on a visit to England in 1863.

Notman says that, for the Hocken, things began to change from the 1960s, with notable acquisitions by Māori practitioners since then including works by the acclaimed Port Chalmers-based artist and former Frances Hodgkins Fellow, Ralph Hotere (Te Aupōuri, Te Rarawa).

That ongoing interest in collecting art by contemporary Māori artists is reflected in the Hocken Collection’s three latest acquisitions. 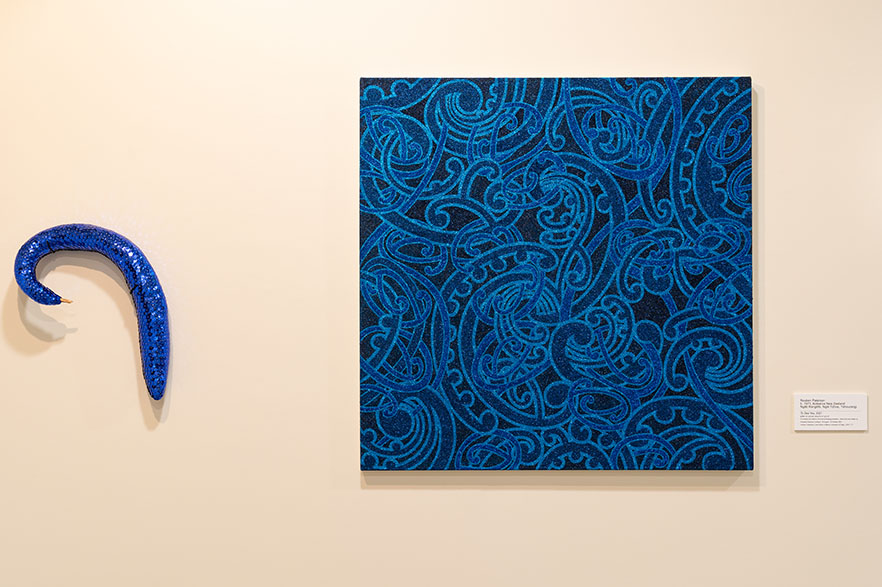 They include a glittering work by Auckland-based artist, Reuben Paterson (Ngāti Rangitihi, Ngāi Tūhoe, Tūhourangi). In To Sea You, Paterson used glitter to create an ocean-blue canvas painting, and blue pins and sequins to cover a complementary dried gourd.

Paterson says that this and similar works have been heavily influenced by traditional Māori koru and kowhaiwhai patterns, and by the works of the Dutch-Kiwi artist, Theo Schoon, whose interest in Māori design embraced kowhaiwhai patterns and carved gourds.

Notman says that the Hocken was especially interested in Paterson’s work because he is one of this country’s foremost contemporary Māori artists and not previously represented in the Hocken’s collections. 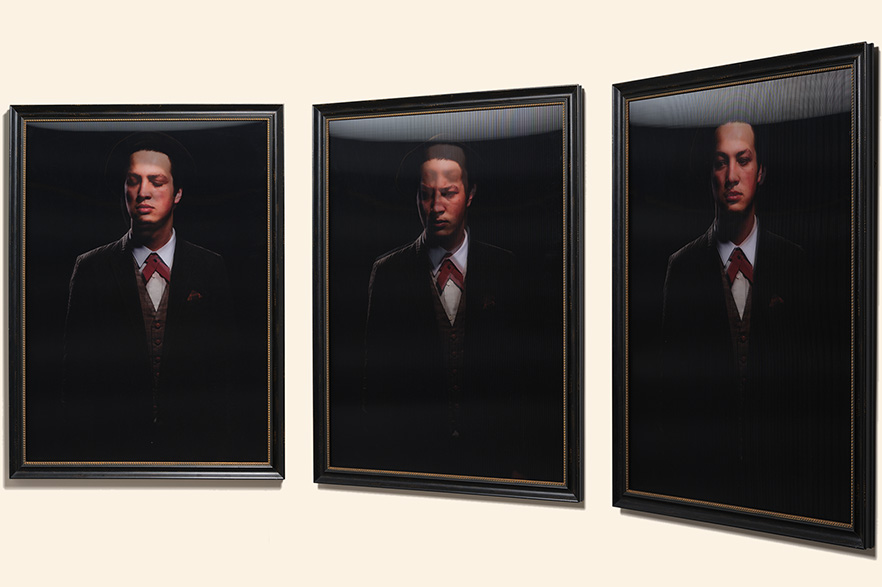 The other two works feature photographs, although these are an artistic world away from your average instant selfies and holiday snaps.

Auckland-based artist and art curator, Nathan Pōhio (Waitaha, Kāti Māmoe, Kāi Tahu, Kāi Tūāhuriri), used what are called “lenticular lenses” to produce printed images of musician Marlon Williams (Ngāi Tahu) in 2010. Williams is depicted as a lookalike of the silent movie star, Buster Keaton (one of Pōhio’s heroes), whose expression changes between three classic Keaton poses as the image is viewed from different angles. Titled Homemade Glider Kitset, the Hocken has purchased one of five of these prints.

“It is a fascinating collection and offers some very interesting opportunities for interpretation and further research, whether that is from an artistic or historical point of view, or from the cultural perspective of the people, activities and subjects depicted in the prints.”

Notman says that the Hocken is especially interested in Pōhio’s work because of his (and Marlon Williams’) links to the southern iwi, Ngāi Tahu, and because neither the artist’s work nor the photographic technique are otherwise represented in the Hocken’s collections.

The Hocken purchased the Paterson and Pōhio works at an art auction fundraiser last year in support of the Auckland trust-run contemporary art gallery, Artspace Aotearoa. Paterson created To Sea You expressly to donate to the auction, and Pōhio donated one of his existing Williams prints.

The third artist, Bridget Reweti (Ngāti Ranginui, Ngāi Te Rangi), was the Frances Hodgkins Fellow at Otago in 2020/2021. During her tenure, the Dunedin-based artist created a series of gelatin silver photographs, titled Summering on Lakes Te Anau and Manapouri, that re-captured, from a Māori perspective, scenes the famed Dunedin photographer, Alfred Burton, had photographed in 1889.

The Hocken has purchased from Reweti a suite of 16 of her photographs that focus on Lake Manapouri, as a part of its policy of acquiring work from each Frances Hodgkins fellow. 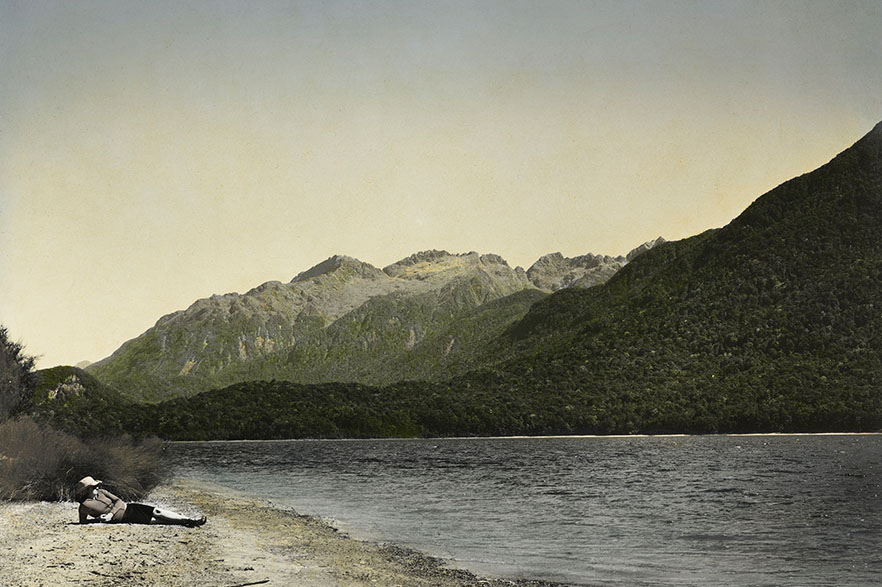 Notman says that all three artists’ works support the Hocken’s key priorities of filling gaps in and improving the depth of the collections; and ensuring that they represent a broad spectrum of New Zealand artists and resonate with the research and cultural interests of the country’s changing demographic: especially by adding works that strengthen the representation of Māori artists and resonate with Māori and Pasifika students and researchers.

She says the Hocken will this year advertise for an art curator with expertise in toi Māori and proficiency in te reo and tikanga Māori, to encourage engagement with Māori and to enable a Māori perspective on the art collections and the way they are used.

“I’d love for the University to consider developing a course in Māori visual arts,” Notman adds, “and have the wealth of important art we care for included in the course as work to be encountered, discussed, thought and written about.”

Paterson encapsulates the response of the artists to the acquisition of their works. “I just think that it is a very prestigious collection, and it is very special to feel like your work can be accessed by so many people.”

The Paterson and Pōhio works, along with a selection of Reweti’s photographs, are currently on display in the Hocken foyer.