“Don’t be afraid to put yourself out there and stand out.” 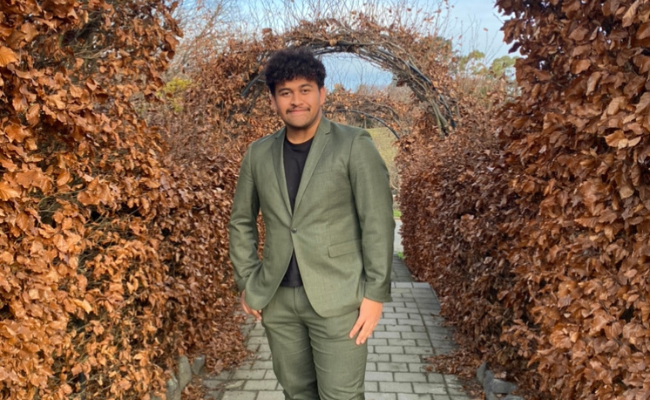 David says it is “bittersweet” to be closing one of the most important chapters of his life.

As director of this year’s Capping Show and lead in Chicago the musical, performing arts student David Tuitama is in hot pursuit of his dreams.

The Bachelor of Performing Arts graduand is ready to cross the stage this month to collect his degree.

David says it is “bittersweet” to be closing one of the most important chapters of his life.

Unlike many other qualifications, a performing arts degree doesn’t necessarily have a linear career path, but for those who choose it and continue to work at it, it can be hugely rewarding, he says.

He chose it for exactly that reason, saying it’s his “passion” and he “couldn’t imagine studying or doing anything else”.

His family migrated from Samoa, and David was raised in Auckland.

While there are plenty of opportunities on offer in Auckland in the arts, he chose to pursue his dream in Dunedin.

“Otago had a good balance of all three disciplines that I wanted to study – theatre, music and dance. It also has an environment where you’re allowed to be young and experience life. It was the perfect opportunity to work on my craft whilst also being able to enjoy being a student,” he says.

Like many graduating this year, his path to finishing his degree has had its challenges.

David packed up his things and moved to Dunedin in 2019, just before the outbreak of COVID-19.

“COVID was really hard for me. As a growing performer, isolation wasn’t the most comforting. I was filled with a lot of self-doubt and became scared of entering a career path with no guarantees.”

Despite the tests presented by a global pandemic, he was nothing short of busy.

“Over my time at Otago I learnt resilience and how to grab onto every opportunity that comes my way. What makes me happiest about the Arts is the freedom to express and create without judgment. The people are an added bonus.”

“I did everything I could performance wise at university and truly tired myself out. I worked, performed, studied and had extracurriculars at the same time so I was constantly juggling.”

“During my time studying as well as working a part time job I also performed in Lunchtime Theatres, in Musicals, small performances and the Capping Show. I was also the dance representative for Performing Arts Students Association in 2021. I also did a few dance pieces for the University.”

Notwithstanding his commitments and the pressure of completing a hands-on degree, David enjoyed his papers so much he managed to complete his degree in two and a half years.

Now as he prepares for graduation, he is directing this year’s Capping Show, starring in a lead role for Chicago, while working in retail.

He plans to use his studies to direct, choreograph, perform, write and teach.

“Over my time at Otago I learnt resilience and how to grab onto every opportunity that comes my way. What makes me happiest about the Arts is the freedom to express and create without judgment. The people are an added bonus.”

David says he has his supportive family thank for supporting him on his journey. He says they have been their “backbone” through this journey.

“I’ve also met some friends down here who have also become a part of my family which is super awesome. My lecturers, were the most supportive, humane people, and I was so lucky to have learnt so much from them.”