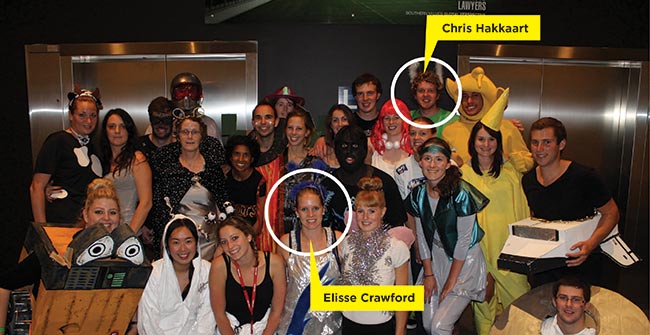 Chris Hakkaart and Elise Crawford join their fellow Red Shirts in costume for the finale of Hands-On Science.

If you like the colour red, get a kick out of enthusing kids about science and don’t mind a bit of organising, being a Hands-On Science Redshirt might be the job for you.

Among many opportunities offered to science-related postgraduate students at Otago is the chance to be a “Redshirt” – a postgraduate or senior science student willing to work for a week supervising 240 science-minded students from around New Zealand.

Hands-On Science was held for the 24th time this year. The January camp lets students heading into Year 12 and Year 13 work in teams on a science project dear to their heart, as well as being exposed to science and ideas in many other areas.

Overseeing them all, and supervising them in a Residential College overnight, are 27 Redshirts.

Chris Hakkaart, who is starting a PhD this year looking at cancer genetics, attended the camp while at South Otago High School in 2008. He loved the experience so much he originally chose microbiology (his project choice) as his study subject at University.

Although he’s since moved to genetics, the call of Hands-On Science didn’t change, and this year was his second as a Redshirt.

“It’s really rewarding, that I get to share my excitement about science, both when I was at high school and now as a postgrad.”

“Hanging out” with 240 teens may not sound like fun to everyone, but Chris says it’s the best part of the camp. “I like hearing what they enjoy about science, and sharing that discovery/problem solving experience.”

Elisse Crawford didn’t attend the camp at high school in West Otago, but, now doing a Master in Dietetics, saw a poster and liked the idea enough to apply.

Also now in her second year, she says the week is “like camp for us too”.

“Yes, we organise activities, but we’re also involved in them as well. Plus, the best part is meeting new Redshirts every year.

“We become like a family – a Redshirt family – even though we’re all from different areas of science and doing different programmes.”

Applications for one of the highly contested spots as a Redshirt open in the second semester.