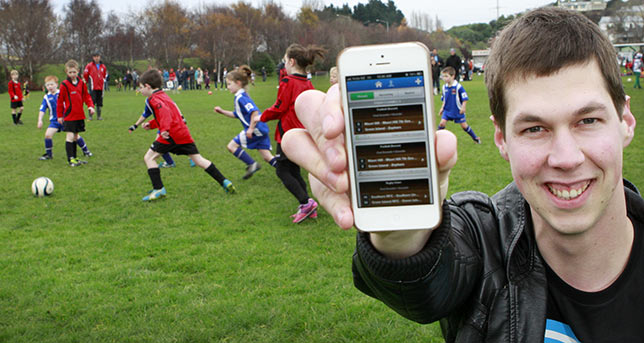 It’s fairly normal to work part-time to fund your studies, but not everyone has a professional partnership with ex-All Black Kees Meeuws, current All Blacks Ma'a Nonu and Tamati Ellison, and Australian rugby player George Smith.

In fact, Thomas has had to take temporary leave from his Otago Masters of Science (Computer Science) studies because the Dunedin company he co-founded needs some devoted time after the launch of its app ‘Waterboy’ (www.waterboyapp.com). He may even relocate to Louisiana, US, to help launch the product internationally through the US university network.

Thomas explains, “Waterboy brings together fans from around the world to talk about sport. It allows users to start broadcasting about sports games, whether they be local grassroots matches or televised international games. The app provides a standard for worldwide sports communication through live scoreboards, subscription services and real-time commenting via text and images and, in the future, video.

“The Waterboy team is made up of some talented like-minded individuals from around Dunedin – it’s a great place to start up a company. We've got contacts throughout the sports industry.”

Waterboy is one of several commercial ventures Thomas has been involved with (see also Tiki Wai Me! www.globelet.com). He says his Masters supervisor Professor Geoff Wyvill has been very understanding about his extra-mural activities.

“Geoff knows I can work independently and that I'll make up for lost time when I need to focus my efforts elsewhere. He supported my temporary withdrawal from my thesis and he's never shy to give me valuable advice based on his experience in the industry. With his energetic character and endless knowledge, he's one of a kind. I couldn't wish for a better supervisor.”

When studying, Thomas is based in the Graphics Research Group of Otago’s Computer Science department. His Masters’ thesis – ‘Investigating Solid Noise Synthesis’ – is all about making noise.

“Visual noise actually, and of the solid variety. In computer graphics, we use noise (also known as randomness) to add detail to computer generated models. It is the fundamental ingredient that makes modern computer graphics look so spectacular. It is used in textures, animation, physics and more. My research explores the last 25 years of research in this field, and I'm contributing my own algorithms to generate noise more efficiently.

“I've always had a creative itch, with a keen fascination in computer games, graphics and animation. I'm a huge fan of 3D animated films. I hope to work at Weta Digital or Pixar one day.”

Thomas believes the opportunities Otago has placed in his hands will have a significant effect on his future.

“A few years ago I was one of the first people in the world to witness Steve Jobs present the iPhone 4 at Apple's WWDC conference in San Francisco. The next year I got to see Buzz Aldrin talk about exploring the universe. My study at the University of Otago has already made such an impact on my life, and I'm just getting started.”