From diploma to kakapo 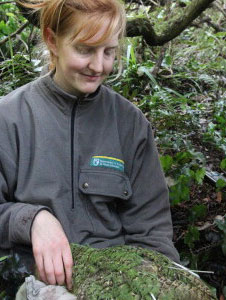 She opted for a Postgraduate Diploma in Wildlife Management directly after finishing her Bachelor of Science, majoring in ecology.

“After I’d completed the diploma I got seasonal work with DOC, which had come from contacts I made doing a field trip while studying.

Seasonal work led to contract work and now she’s a senior ranger for DOC, working as the logistical link between the kakapo rangers in the field and the management team of Kakapo Recovery.

“I’m so lucky to have got into this role. We’re working at the forefront of innovation and conservation in New Zealand.

She had elected to stay at university for a fourth year and do the diploma with the aim of just such a career, and says it was “an awesome degree”.

“It was really focused, and I picked up so many skills doing it. It was just invaluable to be introduced to the tools that we actually use in the field.”

While mostly office-based these days, the team is just coming out of the breeding season (kakapo only breed every few years) and Jo has just spent three months working on Codfish Island.

“The breeding season is what we hang out the other years for,” she laughs.

In the hot spot

Jo is originally from Southland, and has “accidentally” ended up back in the region, but says it’s the “hot spot” in New Zealand conservation so the perfect place to be.

Although she considers herself lucky to be in her current role and has no immediate plans to move, she is aware that her qualifications, skills and background have now combined to give her options overseas.
She also wouldn’t rule out a Masters degree.

“There are just so many options available,” she says.