Social mobility & the foundations of an egalitarian society, 1880–1940 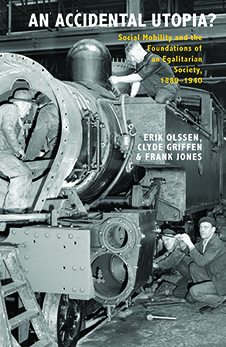 An Accidental Utopia? investigates a more egalitarian past at a time when New Zealand ranked fourth in the developed world for social inequality. It is our first systematic analysis of urban social structure, focusing on three major forms of mobility – marital, worklife and intergenerational. This enables it to identify the distinctive forms taken by the capitalist class structure in urban New Zealand during a formative historical period, 1890–1940.

By placing the analysis deep within a particular community – one of the two most densely settled urban areas at the time – the book also demonstrates how colonists and their children made class less central to social organisation than it had been in Britain and also how people created a class-based politics to protect and advance equality. The intimate account of political change across the period reinstates the importance of contextual analysis, showing the need to analyse the social and political together in order to explain Liberal decline and the rise of Labour.

In a comparative discussion, the authors demonstrate the importance of size and scale not only to this topic but to sociology and history in general, as these helped to make southern Dunedin critical in creating New Zealand as one of the world's most egalitarian societies. While class is their central focus, the authors also show how religious and ethnic divisions were rendered more marginal than in urban Britain or the US.

The final chapter asks to what extent the remarkably fluid social patterns identified resulted from deliberate choices made by the first settlers and their descendants. By interweaving class and culture, structure and agency, the authors provide new insights into the making of modern New Zealand.

ERIK OLSSEN and CLYDE GRIFFEN, an historian of mobility in the United States, have worked on mobility in southern Dunedin for the best part of fifteen years; FRANK JONES, one of the pioneers of log-linear modelling in the social sciences, undertook the log linear analyses.