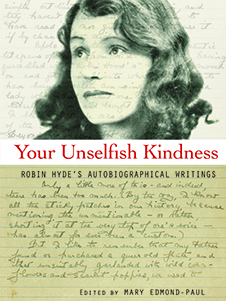 Robin Hyde’s extraordinary but short life (1906–1939) included a precocious early career as poet and parliamentary reporter. As a journalist, she juggled writing for the social pages with highly political reporting on unemployment, prison conditions and the alienation of Māori land. She struggled with drug addiction and depression, single motherhood twice over, and a lengthy period as a voluntary patient in a residential clinic (The Lodge) attached to Auckland Mental Hospital in Avondale. Her life culminated in brilliant reporting on the Sino/Japanese War following a journey into China in 1938.

Hyde also produced several major novels, largely during her time at The Lodge, and several manuscripts of autobiographical writings, some written as part of her therapy. Your Unselfish Kindness gathers these together for the first time. Mary Paul's careful and well-researched introduction looks at the background to these writings, bringing many new insights to the study of New Zealand literature through her discussion of mental illness and therapeutic approaches to it in the 1920s–30s.

MARY EDMOND-PAUL is the author of Her Side of the Story: Readings of Mander, Mansfield and Hyde (1999), the editor of Lighted Windows: Critical essays on Robin Hyde (2008) and co-editor of Gothic NZ: The darker side of Kiwi culture (with Jennifer Lawn and Misha Kavka, 2006). She is a senior lecturer in English and Media Studies at Massey University Albany, in Auckland.