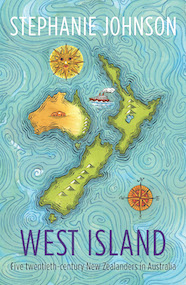 Five notable twentieth-century New Zealanders who made their lives in Australia are the subject of this fascinating biographical investigation by award-winning author Stephanie Johnson.

Roland Wakelin, Dulcie Deamer, Jean Devanny, Douglas Stewart and Eric Baume had little in common in personality, proclivities and politics. Yet they all experienced fame and/or notoriety in the ‘West Island’ while being largely forgotten in their country of origin. They also occasionally crossed paths in the course of eventful lives.
The works of painter Roland Wakelin place him as a founder of Australia’s Modern Movement, while his modest and affable personality was the opposite of the stereotypical artist. Dulcie Deamer was a writer and libertine known for her leopardskin attire and associations with the larger-than-life characters of the Sydney bohemian set – including the ‘Witch of Kings Cross’, fellow New Zealander Rosaleen Norton. The forthright feminism and creative integrity of novelist Jean Devanny led to bitter battles with the same communist movement she devoted decades of her life to. Douglas Stewart was one of the most famous ‘Australian’ writers of his period. He was a long-term gatekeeper for Australian letters as the literary editor of the Bulletin, and then editor for publishers Angus and Robertson. Born into an unusual and unorthodox Jewish family, Eric Baume gained prominence in Australia as an early prototype of the modern-day ‘shock jock’ and at one stage one of the country’s highest-earning media personalities and bestselling authors. A lifelong gambling addict, he died in debt.

Stephanie Johnson restores these striking New Zealanders to our national narrative, engaging their life stories to illuminate the curious lacuna that exists at the heart of the complex relationship between the two nations.

As a writer with strong connections to both countries, Johnson draws on her own experiences of life on both sides of ‘the ditch’ in her reflections on the trans-Tasman diaspora and the subtle differences and cultural divide that set apart the two countries.

“I’ve always carried with me a deep malaise about where I belong,” says Johnson. “With that has come questions such as what makes us New Zealanders and all the issues around trans-Tasman expatriatism. I wanted to explore this on a personal level, as well as a biographical one, through the guise of five larger-than-life New Zealanders who made Australia their home.”

Since the much-loved The Heart’s Wild Surf in 1996, Stephanie Johnson has published 11 more novels. She is a past winner of the Montana Book Award (for The Shag Incident), the Katherine Mansfield Fellowship in Menton and the Bruce Mason Playwriting Award. She has also held the University of Auckland writers’ residency and several of her novels have been long-listed for the Impac Awards in Dublin. With Peter Wells, Stephanie founded the highly successful Auckland Writers Festival in 1998. Known also for her poetry, plays and short stories, Stephanie lives in Auckland. Her most recent novels are Jarulan by the River (HarperCollins 2017) and The Sisters' Lover (Independent 2019) published under her pseudonym Lily Woodhouse.

'West Island goes right to the heart of a nascent sibling national rivalry and dissects the cultures and psychology that nurtured it.'
– Stuff