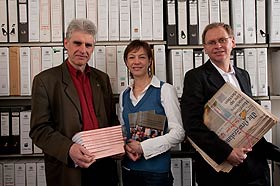 Drs Chris Rudd, Janine Hayward and Geoff Craig "There was a lot of trivia and personality coverage ... but, at the same time, a quarter to a third of the material was informative."

Many people think that the media have dumbed down over the years, increasingly producing populist trivia rather than useful information. That's a serious concern at election time, when voters need facts rather than fantasy – but is it true?

To find out, Department of Politics researchers Drs Chris Rudd, Janine Hayward and Geoff Craig investigated the role of the media in providing information to voters during the last general election campaign. "We went in with the view that the media were the pits," admits Rudd, "but came away pleasantly surprised. There was a lot of trivia and personality coverage, which we were expecting, but, at the same time, a quarter to a third of the material was informative."

A research team analysed print and television news, leaders' debates and political interviews, political advertisements and online comment. Their findings have recently been published in Informing Voters? Politics, Media, and the New Zealand Election 2008, edited by Rudd, Hayward and Craig.

"If you read newspapers or watched television in the four weeks leading up to the election you got a lot of fluff and padding, but you could see how the parties stood on key issues," says Rudd.

The findings also led Rudd to question the value of "infotainment" in the media.

"Is trivia really all bad? Many people may not have that much interest in politics – but gaining their interest with trivia might lead them to learn more about substantial issues.

"You need to be entertaining to capture the attention of apathetic people. "There's also the question of how much information is too much? If we had 100 per cent information, who would read or watch it? People would tune out or get overloaded."

The focus on scandals and personal attacks turned out not to be as media-driven as might have been thought.

"When the media make politicians look bad because of what they say, it is important to remember that the politicians actually say these things. If they are trivial and negative, that is how they are reported – and that's not the fault of the media or the public."

So do New Zealand media do a reasonable job with political communication?

"There have been similar studies overseas and we find that New Zealand media are in line with Europe and North America. In an international context, we don't fare too badly.

"Our advice to the media? Carry on as you are."