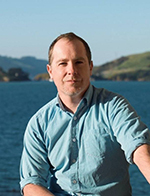 Jesse Bering is a research psychologist and Director of the Centre for Science Communication. An award-winning science writer specializing in human behaviour, his first book, The Belief Instinct (2011), was included on the American Library Association’s Top 25 Books of the Year. This was followed by a collection of his previously published essays, Why Is the Penis Shaped Like That? (2012), and Perv (2013), a taboo-breaking work that received widespread critical acclaim and was named as a New York Times Editor’s Choice. His most recent book is Suicidal (2018, published in the UK as A Very Human Ending). All of his books have been translated into many different languages.

An experimental psychologist by training, Bering’s primary research area is the cognitive science of religion and he has published extensively in that field. His work has centred on the cognitive underpinnings of afterlife beliefs, as well as how we ascribe purpose to inherently meaningless life events as a consequence of our species’ evolved psychology, most notably as an artifact of our social cognition. More recently, using controlled studies he has begun to explore people’s ability to cognitively reconcile religious and scientific beliefs when they are faced directly with experiences or information that challenge their worldviews.

As a practicing science communicator, Bering and his work have been featured in numerous documentaries, TV shows, and radio programs, including Through the Wormhole with Morgan Freeman, Conan, Chelsea Lately, Q&A (Australia), NPR’s All Things Considered, and the BBC. In addition to writing extensively for Scientific American and Slate magazines, his essays and opinion pieces have also appeared in Playboy, The New York Times, The Guardian, Discover, Vice, and others. To learn more, visit www.jessebering.com.