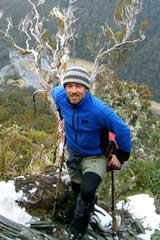 Geoff completed his Bachelors of Physical Education (1985) and Bachelors Commerce (Marketing, 1987) at Otago University. For the next ten years he worked for a number of national and multinational businesses in roles including Territory and Sales Manager, Marketing Manager, Manager Quality. He later shifted to a general management role with the Paradise Charitable Trust while also completing his Masters of Physical Education (Otago University). He and his family returned to Dunedin in 2005 and in 2007 he became (and remains) the Coordinator Applied Theory and Practice at the School of Physical Education. Geoff has professional and personal interests in mountaineering, tramping and stand up paddle surfing

Geoff’s masters degree explored the nature of the bond or ‘sense of place’ that past and present residents of Paradise, Glenorchy have for that place. In addition his work was interested in better understanding how the researcher can convey a participant’s ‘sense of place’ to the reader when the nature of that bond is often difficult for participants to explain with words alone.

His research interests also include poststructuralist perspectives on the ‘work’ that adventure as discourse does within society. In particular he is interested in how niche media associated with the lifestyle sport of standup paddle boarding act as a means to transmit societal values and norms.

Within his role as Coordinator Applied Theory and Practice he has an ongoing research interest in the nexus of theory and practice in supporting the development of undergraduate students as future professionals.