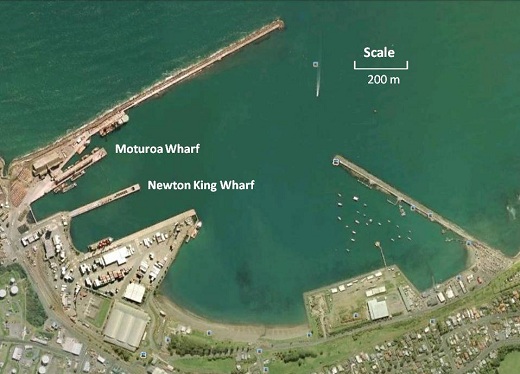 Climate change has a variety of important impacts, one of which is reflected in sea levels. Indeed, an accurate picture of historical sea level trends is an essential element in predicting future sea level change. Douglas (1991, 1992), asserted the need for approximately 60 years of annual mean sea level data if a reliable (modern) estimate of a sea level trend is to be identified. The reconstruction of a coherent and consistent sea level record over such a period of time (or longer) can be fraught with difficulties, requiring both geodetic and sea level records. This project focussed on reconstructing the tide gauge record at Port Taranaki (New Plymouth) in New Zealand – a record that for many years was thought to be too problematic to resolve. From a tectonic viewpoint, this result has particular importance, being the only long-term sea level trend able to be determined on the West Coast of New Zealand.

The tidal records were found to be in a variety of hard copy forms, all of which were different.

The earliest records (1918 – 1921) were never found – the only information available being a single MSL calculated for the four years.

The data from 2nd December 1955 – 26th April 1966 (from a Foxboro gauge) were on circular paper charts, 280 mm in diameter. Each chart contained at least one week of data although some charts had been used for two consecutive weeks. These data were collected by hand.

The data from 17th April 1966 – 11th April 1983 (from an Evershed & Vignoles tide gauge) were on long roll paper charts, each roll covering a duration of approximately 2 months. Six different types of roll chart were used, three of which were used only once or twice, but with each having different vertical graduations. Some of the vertical graduations were quite anomalous. Some rolls were used for two consecutive two month periods. In addition, shortly after New Zealand adopted a metric measurement system in 1972, the charts changed from imperial measurement (feet) to metric measurement (metres). These charts were scanned and the graphs digitized using locally developed software.

From May 1984 (corresponding to the installing of a new automatic gauge) to June 1991 the data had already been converted into hourly point values by the Royal NZ Navy and were held in hard-copy form with one month of data recorded on a single A4 sized page. These hourly data were entered manually.

All data from June 1991 onwards was supplied by LINZ who already had the hourly sea level heights in digital files.

The data was placed in University of Hawaii format (c.f., Caldwell, 1999) and was quality assured using their sea level processing software – see http://uhslc.soest.hawaii.edu/uhslc/jaslsoft.html

Funding for this project came from GNS Science for financial support under PGSF contract C05X0702 (Impacts of Global Plate Tectonics in and around New Zealand).