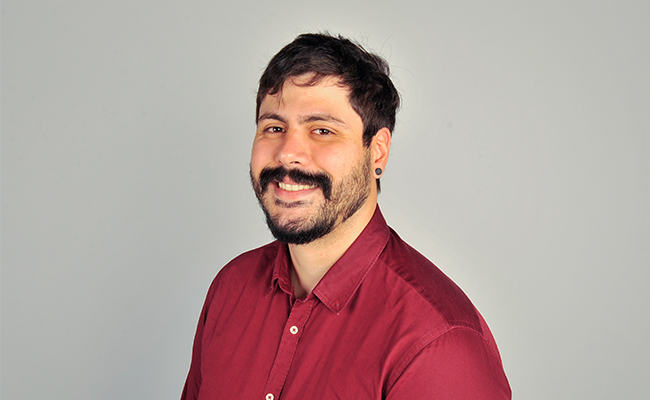 PhD candidate Renan Lyra made it to New Zealand in mid-2021 after beginning his PhD remotely.

He might have “lost” a year of living abroad but for PhD candidate Renan Lyra starting his studies in a “safe spot” turned out to be more important.

Renan was booked to start his 48-hour journey to New Zealand from Brazil on 23 March 2020, just a few days before the border closures in New Zealand.

“It was frustrating at the beginning, but I try to see it as a good thing. I was very nervous about making a big move from my hometown to the other side of the planet, without anyone I knew.”

Born and raised in Brasilia, Brazil’s capital, Renan has never thought of himself as a good student.

Renan completed his high school education through the public school system in Brazil. One, he says, is quite different to those in New Zealand. He did not have teachers in some subjects, including physics.

He never believed he would pass the entrance exam to get into university back home.

“Looking back, I really feel like I’m overachieving being able to do a PhD overseas.”

When it came to doing a PhD, Renan believed he was not destined to do his PhD overseas because he did not believe his family could afford to support him. He also didn’t believe he was a good enough student to get a scholarship.

After speaking with some friends, he was convinced to search FindAPhD. The first matching result was the University of Otago.

Renan quickly found the Suicide and Mental Health Research Group and a few weeks later received an email from his future supervisor Dr Gabrielle Jenkin. He then applied, accepted and was awarded a University of Otago Doctoral Scholarship.

“I feel like it was meant to happen, because at the same time it was not planned, everything worked out in such a perfect and lucky way!”

Renan quit his job and was ready to leave Brazil when COVID-19 began to cause travel issues worldwide.

Concerned he would not be able to afford to move country after quitting his job and the borders closing, he decided to start his doctoral research remotely.

“Sometimes I would feel demotivated by the lack of experiencing the PhD ‘life’ with the other students, but at the same time I was able to focus on my study. I wrote a paper that got published in April (2021), my ethics approved and some chapters written while I was in Brazil! So, I would say it was challenging but not hard or bad.”

The decision to begin his study remotely worked out in Renan’s favour when a friend sent him a news report about the Ministry of Education’s intent to open 250 border exemptions to PhD and postgraduate students into New Zealand.

He was selected as one of the Otago students and once his Visa was approved he managed to secure a spot in Managed Isolation and Quarantine in March.

“As there are not flights being operated from South America to New Zealand, I had to fly over to Dubai, then Kuala Lumpur, until finally I arrived in Auckland. Forty-seven hours of travelling - and I am afraid of airplanes!!! But, here I am!”

Since touching down in Wellington, Renan has been working hard to immerse himself in the city and adjust to a chillier climate.

Renan has been working in suicide prevention since he was in his undergraduate. He hopes his research into the experiences of first responders with suicide patients will aid in bettering the help available to them.

“Moreover, because of the kind of interaction they have with the deceased, the lack of training in mental health, the cumulative effects these weekly/monthly contact with suicide have on them, the high suicide rates among first responders - especially police officers, and the gap of research helped me to make up my mind to focus my study on first responders - although I am still going to include the mental health professionals.”