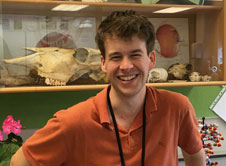 As a secondary school teacher of biology, chemistry, and junior science Dick Hitchings uses the skills and knowledge from his Biochemistry degree every day.

During his own schooling Dick’s favourite subjects were chemistry and drama, and he also enjoyed biology and English.

“I always wanted to do something that made use of my public speaking / performance skills while still based in the science subjects that I enjoyed,” says Dick.

“I always found biology very interesting, but at times I felt frustrated by the feeling that I wasn’t being told the full story. From what I knew of biochemistry and genetics, I felt like these subjects could shed some light on why living beings are the way they are, and explain them in from first principles in terms of the chemistry I had learned,” he explains.

Dick found that biochemistry gave him the challenges and answers he wanted and relished working in a dynamic field where he was learning about features of life that had only been discovered a few years or even months previously.

“I always felt like I was breaking new ground,” he says.

Maybe this is how his own students also feel, but with his background he is always able to answer their “why” questions by illustrating the links between chemistry and biology.

Originally he considered pursuing a science communication qualification, but while he didn’t do so, he is communicating science every day to the next generation of potential scientists.

He has a clear message to that next generation.

“Biochemistry is one of the fields which we’ve only just worked out the rules for in the last hundred years, and have barely started to work out how to use it to manipulate the world around us as well as our own bodies.

“As far as getting a future-proof field to work in, you couldn’t do much better than biochemistry,” he says.