Circulating tumour DNA (ctDNA) is DNA shed from a tumour into the blood. Known as a liquid biopsy, the blood sample can be used to detect cancer DNA.

A routine blood test can be used to gain access to the tumour DNA, allowing researchers to track levels of mutations specific to that tumour over months and years. By following these mutations, researchers can assess the success of a treatment and whether a tumour is becoming resistant to treatment.

As blood tests are non-invasive and can be performed without requiring access to a hospital, the ctDNA sample method will be accessible to those in remote communities and will be preferable to the existing detection methods which are expensive, painful and are not as sensitive for detection of very small tumours.

Current cancer diagnosis and observation techniques require access to specialist medical facilities. The barriers in access to these sites can be diminished by a liquid biopsy.  The ctDNA test requires a tube of blood. This can be taken by a district nurse - at home or at the GPs surgery. The tubes can then be sent by post to a laboratory for processing.

DNA can be extracted from tumour tissue after tumour resection.  DNA is then tested against a panel of 500 genes commonly mutated in cancers. Once a patient's specific mutation is known it can be tracked in the blood by the ctDNA technique.

The level of the mutation in the blood correlates with the size of the tumour.  Levels can be tracked using a technique called droplet digital PCR (ddPCR).  By creating 1000s of droplets, each of which contains a known amount of DNA, software can be used to count the number of droplets that contain normal DNA Vs the number that contain mutated DNA. 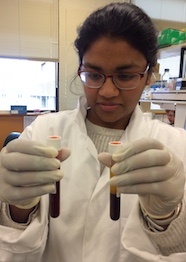