The health of people with coeliac disease in New Zealand

Coeliac disease is a multisystem autoimmune condition for which the only treatment currently is a gluten free diet. Complete elimination of dietary gluten will, in most cases, allow a full recovery. However, maintaining a gluten free (GF) diet is challenging.

The challenge of a gluten free diet

The restrictions of a GF diet have potentially far reaching effects beyond the choice of foods. Whether GF food is available, hidden sources of gluten and gluten contamination can restrict the lifestyle of a person with CD.

Members of Coeliac New Zealand were invited to participate in the survey. Most (88%) described their diet as being strictly GF, yet many had incomplete recovery from symptoms. Following a GF diet was very difficult or moderately difficult for more than one-third (36%).
Coeliac New Zealand

Common problems included finding good quality GF foods and identifying whether foods were GF or not from the label. More than one-third (36%) avoided travelling at least some of the time because of CD, and more than one-quarter (26%) never or rarely ate at restaurants.

A concurrent study examined GF food preparation practices at food outlets in central Dunedin. This study confirmed why people with CD are reluctant to eat at restaurants. A survey of 90 chefs at Dunedin restaurants during summer 2012/13 demonstrated that it was not safe for people with CD to dine out at more than 75% of restaurants offering GF food in Dunedin. 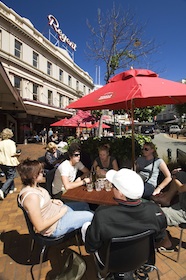