River flow directions and river drainage systems are not necessarily permanent features of the landscape. Geological changes can cause a river to flow in a different direction, and become a tributary of a different drainage system. This river capture process has been common in the South Island of New Zealand over the past few million years. 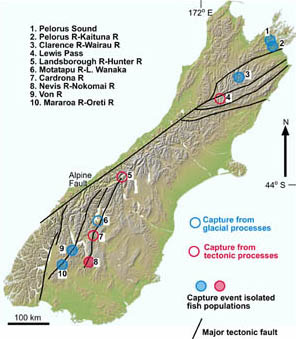 Fig 1: River Capture map Click on circles to jump to information about that section.
Full size version of the River capture map

The main geological changes that have caused river capture are glaciation and tectonic movement associated with earthquake faults. Glaciation is responsible for most river capture events over the past 300,000 years. Tectonic movement, especially uplift of the landscape, is much slower than glacial processes, and tectonic river capture normally requires hundreds of thousands of years, or even millions of years. See the index map (Fig 1) for locations of examples, and the link for more information.

The following gallery of photographs, diagrams, and maps show examples of river capture in the South Island as a result of glacial and tectonic processes. The accompanying notes give a brief account of the geological events that caused the rivers to flow in different directions. Click on the index map to link to particular examples. More detailed information is available from the published articles listed in the bibliography below.

River capture events cause isolation of populations of freshwater fish. These populations then evolve separately, as their genes mutate in different ways. Without reproductive homogenization, the populations can become quite different, and can even become separate species on longer time scales (at least 500,000 years). The South Island of New Zealand has several documented examples of separate evolution of fish populations isolated by river capture: see index map ( Fig 1).

Examples of river capture in the Marlborough area

The simplest form of drainage change occurs when rising sea level floods a river valley and separates two tributaries by seawater. The Kaituna River was a tributary of the Pelorus River ( Fig 2) about 150,000 years ago, and both rivers flowed northeast down what is now Pelorus Sound. Rising sea level has separated these two rivers, and they now flow into seawater at Havelock ( Fig 3). The geometry of this separation event is shown in the sketch in Fig 4. The two rivers have been separated for about 8,000 years, and this is long enough to cause measurable genetic differences in freshwater galaxiid fish.

2. Change in direction of the Kaituna River.

The Kaituna River currently flows north to Pelorus Sound ( Fig 3). However, up until about 100,000 years ago, the Pelorus River turned 90° at Havelock and flowed south along what is now the Kaituna valley ( Fig 3), to enter the sea to the east of Blenheim ( Fig 2). This south-flowing river carried large volumes of gravel from glaciers in the mountains. Remnants of this gravel are still preserved on some valley walls, as terraces, as can be seen as grassy terraces in the middle and left of Fig 5 (looking up Pelorus valley) and in Fig 6A (Kaituna valley). Stacking (imbrication) of slabby schist pebbles in these gravels indicates the river flow direction at the time of deposition. The river that deposited the Kaituna valley terraces ( Fig 6A) gravel in Fig 6B was flowing from left to right; this is opposite to the present Kaituna River in the small gorge in Fig 6A foreground (flowing away from camera). These gravels dammed the Kaituna valley and stopped the Pelorus River, forcing it to flow to the northeast instead. The sequence of events is summarized in Fig 8 (original drainage pattern), Fig 9 (when valleys were chocked with glacial outwash gravels) and Fig 10 (present drainage pattern). The separation of the Pelorus River catchment from the Wairau River catchment ( Fig 1) about 100,000 years ago has resulted in substantial differences in genetic makeup of freshwater galaxiid fish in these catchments.

The headwaters of the Wairau River flowed into the Clarence River ( Fig 11) until about 15,000 years ago. At that time, a large glacial lake ("Lake Wairau") had formed in the area ( Fig 12). This lake formed between the Wairau catchment (Rainbow glacier) and Clarence catchment (Alma glacier ( Fig 12). When the lake burst through moraine walls, it drained out down the Wairau valley, and the Alma valley became the head of the Wairau River ( Fig 12). This capture event ensured that freshwater galaxiid fish in the Clarence and Wairau catchments have evolved separately ever since.

Examples of river capture in the Southern Alps

There are few low passes through the Southern Alps, and most of the lowest passes are crossed by roads. The low passes that allow road access through the mountains have been kept low by river erosion as the Southern Alps grew over the past 5 million years. Capture events have subsequently diverted these rivers to flow to the West Coast, leaving low divides in the old river valleys.

4. Lewis Pass. Lewis Pass ( Fig 13) is a good example of recent diversion of a Canterbury river to the West Coast. This South-flowing river (orange arrow in Fig 13) used to be a tributary of the Waiau River that flows into the sea north of Christchurch. The upper 10km of this river was captured by the Mariua River that flows west ( Fig 13). The capture occurred because of erosion of crushed rock along a prominent active fault that passes through the Mariua catchment ( Fig 13). This capture event occurred before the last glacial event, about 50,000 years ago. Lewis Pass was sculpted by the previous glacial event, when ice crossed what is now the Main Divide (orange arrow, Fig 13). Fig 14 shows the old glacial valley level, looking north from Lewis Pass. The valley in the distance now drains down a deep gorge to the left.

7. Cardrona Valley. The Cardrona valley was a continuation of the combined Landsborough-Hunter river system ( Fig 15). At that time, this great river flowed south, carrying greywacke gravels from the Southern Alps into the schist country of Central Otago. Fig 19 shows large deposits of greywacke gravel in the Cardrona valley, derived from at least 70km to the north. The Pisa Range ( Fig 19) is a growing fold ridge that has squeezed (tectonically) the Cardrona valley in between the next growing ridge to the west ( Fig 15). Eventually these growing ridges joined, and the Cardrona River began to flow north, rather than south. This sequence of events is summarized in Fig 20 (original drainage and low relief) and Fig 21 (present drainage and high relief). These perspective views highlight the linear nature of the topography, controlled by underlying faults and folds.

Examples of river-capture events in Southland

8. Nevis – Nokomai Rivers. The Nevis River originally flowed southwards as a tributary of the Nokomai valley ( Fig 20). The resulting long straight valley ran between the growing Remarkables Range (to the west) and Garvie Range (to the east) ( Fig 20). As these flanking ranges continued to grow, they eventually pinched off the narrowing valley. At the same time, the Nevis River was captured by erosion of a tributary of the Kawarau River, and now flows to the north ( Fig 20, Fig 21). This capture event has isolated a population of Southland galaxiid fish in the Nevis valley ( Fig 22). This species is not found elsewhere in the neighbouring Kawarau River catchment. The Nevis fish population shows strong genetic divergence fro the Southland fish.

9. Von-Oreti River capture. Ice from Lake Wakatipu flowed periodically along the Von valley over the past 500,000 years and discharged water to Southland down the Oreti River ( Fig 23). The last time this happened was about 500,000 years ago. Since then, the Von River has mainly flowed north. However, headwater tributaries of the Von River have occasionally flowed through a gap in old moraine ( Fig 24), and some connection to the Oreti has been maintained. Continued erosion into old gravels by these tributaries has meant that the channel to the Oreti valley ( Fig 24) was abandoned about 12,000 years ago. The geometry of this change in drainage is depicted in Fig 25. Despite the recent separation of the Von and Oreti catchments, galaxiid fish in these neighbouring catchments are measurably different genetically.

10. Oreti – Mararoa River separation. The Oreti and Mararoa Rivers flow from the same mountain ranges, and flow parallel to each other in their headwaters ( Fig 23). These two rivers are close together and separated by low divides in several places ( Fig 23, Fig 26). The low divides were periodically overtopped during times of glaciation, when the valleys were filled with outwash gravel. At these times, the two valleys were inter-connected, as part of a large alluvial plain ( Fig 27). The connections between the valleys were severed when the rivers cut down into their own gravels to levels below the low divides between the valleys ( Fig 26). This last occurred about 200,000 years ago, and the rivers have been separate since then. The Mararoa River is a tributary of the Waiau River ( Fig 23). Galaxiid fish in Oreti and Waiau catchments are distinctly different genetically.