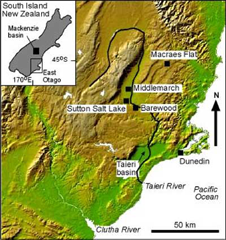 2: The salt lake when full. Schist tors surround the lake. The Rock and Pillar Range is in the background. 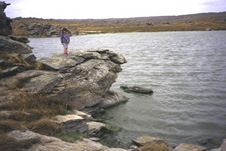 3: The rocky shore when the lake is full. The water is less than 1 metre deep.

The text and some of the pictures below were published in the following paper:

The Sutton Salt Lake is the only saline lake in New Zealand, and has formed in a windy cool-temperate maritime climate. Consequently, the lake is distinctly different from most of the world's saline lakes that form in arid continental settings. Sutton Salt Lake forms annually in a shallow (5 m) bedrock-floored <2 hectare depression c. 50 km from the nearest coast.

The site receives c. 500 mm/year rainfall compared to coastal rainfall near 1000 mm/year because of a minor rainshadow effect of coastal hills. Surface evaporation rate is high (c. 700 mm/year) because of frequent strong winds. Sediments on the lake floor are derived by rain and wind erosion of the surrounding quartzofeldspathic schist bedrock, with a contribution from organic sources, particularly ostracods, and evaporative halite. The sediments have a higher proportion of phyllosilicates (muscovite, kaolinite, and chlorite) than the source rocks because of differential transport of these minerals into the lake depression.

Lake water is entirely derived from rain, rather than groundwater, and the lake waters have had minimal chemical interaction with bedrock. Lake water pH is near 9 and pH of pore waters in drying lake sediments is near 8, compared to pH near 7 for regional surface and ground waters. When full, the lake has salinity about one quarter to one third of that of seawater, and ion ratios are similar to sea water. The lake salinity is derived from marine aerosols in rainwater concentrated by about 20 000 evaporation and refilling cycles in the lake depression. 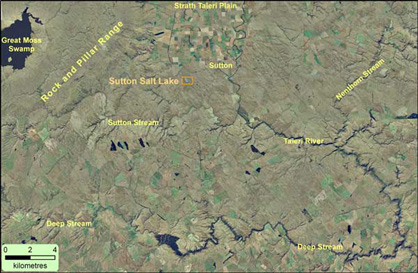 Location map/photograph of the Sutton Salt Lake on the eastern edge of the Rock and Pillar Range, south of Middlemarch. The salt lake is in a reserve administerd by Department of Conservation, and has walking track access. 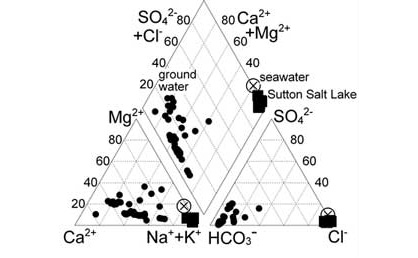 The ratios of ion concentrations in the water in the lake is very similar to sea water. The salts are derived from marine aerosols in rain. These aerosols are forced into the air by wave activity in the sea that is about 50 km away. Water that has interacted chemically with the schist, such as groundwater, also contains dissolved salts, but these are chemically quite different from marine aerosols. 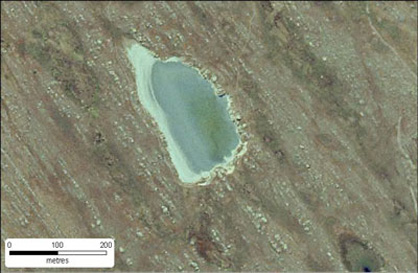 The salt lake is trapped between lines of schist tors (rocky outcrops) that show up as light patches in this photograph. The lake is half full in this photo, and has salinity about a half that of sea water. The white zone on the left is saline mudflat that can have halite (NaCl) crystals.

There is a public walkway administered by the Department of Conservation which provides access to the lake through the scenic reserve. Driving north along SH87 from Outram, before you get to Middlemarch, turn left at Sutton into Kidd's Road. (see map below). 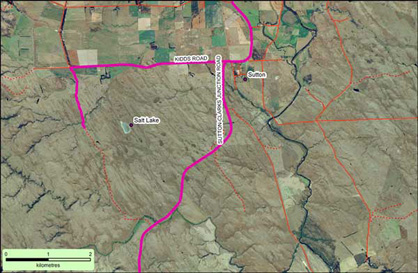