Initiation of the fault zones on the northeast Otago margin

The Waihemo, Blue Lake and Hawkdun Fault Zones initially formed with their northeast side moving downwards, with the faults mainly dipping to the northeast. Some of the faults also dipped to the southwest, and this created a major valley system that drained southeast from Central Otago along the down-dropped faults. Small amounts of sediments from this river system, mainly gravels, are preserved near the present east coast as the Horse Range Formation, and inland as the Kyeburn Formation, shown on the map below. These deposits formed between 112 and 100 million years ago, and have mainly been uplifted and eroded away in the intervening areas as younger mountains formed, with a new drainage pattern. The modern Shag River follows near to the course of the ancient river, the “Waihemo River” as shown in the cartoon below, but the headwaters of the ancient river are now in the headwaters of the Taieri River catchment. 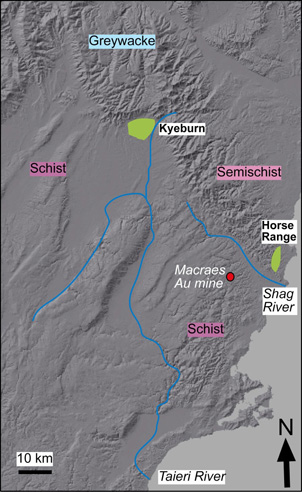 Locations of the middle Cretaceous Horse Range and Kyeburn Formations, which are remnants of a river that carried mainly greywacke from Central Otago towards the coast to the southeast. The middle Cretaceous gravels also contain sediments derived from the rising schist belt, including distinctive sediments from the vicinity of the Macraes gold mine. 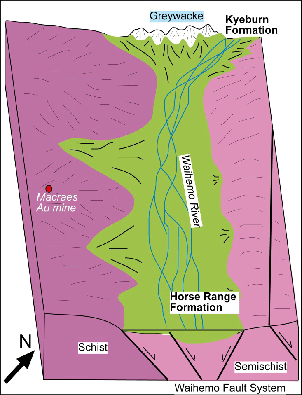 Cartoon sketch of the geology and geography of the ancient "Waihemo River" valley that drained Central Otago in the middle Cretaceous. The Horse Range Formation, preserved on hillsides near the present east coast (Fig. 5,6,7) is a remnant of this river system. The Kyeburn Formation (Fig. 8) is also an inland remnant.

The Horse Range Formation sediments deposited by the Waihemo River were not locally-derived from the nearby schists and semischists that were being uplifted by the adjacent Waihemo Fault Zone. Instead, the formation was derived mainly from greywacke outcrops at least 50 km away, and clasts were transported in a braided river, the “Waihemo River”, see cartoon above). The Horse Range Formation also had input from the Otago Schist belt to the west and/or south, and this appears as quartz and schist pebbles, especially near the base of the formation. Greywacke and schist material in the Horse Range Formation has been substantially altered by groundwater, with addition of calcium carbonate (calcite) from overlying marine sediments, and also from calcite within the greywacke and semischist. Some alteration associated with coaly sediments has resulted in formation of pyrite and Fe2+-bearing clay minerals. 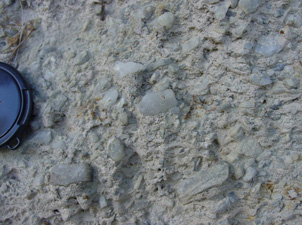 Outcrop of Horse Range Formation, with rounded quartz and schist clasts derived from the Otago Schist to the southwest. 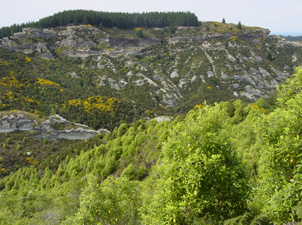 Outcrops of Horse Range Formation at Trotters Gorge. These middle Cretaceous river gravels are dominated by greywacke clasts from Central Otago.. The gravels have been cemented by calcite that was deposited by groundwater, forming erosion-resistant steep valley walls. 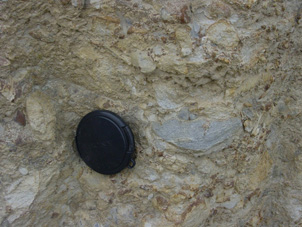 Outcrop of Horse Range Formation in Trotters Gorge. Rounded greywacke cobbles that constitute most of the outcrop were transported from Central Otago via the ancient "Waihemo River" in the middle Cretaceous. The greywacke cobbles have been intensely altered to clay minerals by groundwater, and the rock has been cemented by calcite.

The Kyeburn Formation is a spectacular remnant of the middle Cretaceous river system. It consists of a sequence of river gravels that is several kilometres thick in parts, representing a very large depositional basin that formed in the early stages of Otago Schist uplift. These sediments are locally-derived from nearby semischist and greywacke outcrops. Many of the cobbles are angular or poorly rounded because of shorter transport distances compared to the Horse Range Formation. Groundwater alteration has caused some cementation of these gravels, but this is mostly clay minerals, including some pyrite and Fe2+-bearing clay minerals. The intense calcite cementation seen in the Horse Range Formation is absent from the Kyeburn Formation. 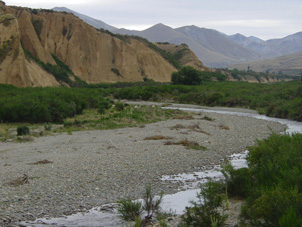 Outcrop of the Kyeburn Formation in the Kyeburn valley, Central Otago. These gravels were derived mainly from middle Cretaceous greywacke mountains, similar to the modern greywacke mountains visible in the background. The gravels form cliffs because they have cemented by clays formed and deposited by groundwater. The pink-red colouring of outcrops results from oxidation of iron-bearing clay minerals by groundwater during modern uplift and erosion. 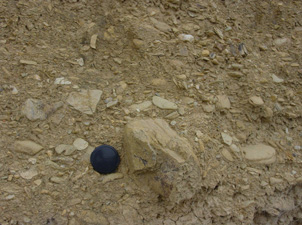 Outcrop of Kyeburn Formation gravels. Blocky greywacke cobbles dominate, and some of these are large and angular. Minor slabby semischist cobbles are also angular or weakly rounded.