Origin of the Waipounamu Erosion Surface

The Waipounamu Erosion Surface is an important feature in Central and East Otago, where it helps to form a low-relief topographic surface that is visible over most of the area. The erosion surface forms an important reference surface that shows up the geometry of subsequent tectonic deformation. Many alluvial gold deposits have accumulated at or near the erosion surface. The erosion surface represents an unconformity, or discontinuity in the geological record, that developed as Otago progressively sank, and the sea encroached, over a long time period from Cretaceous (~100 million years ago) to the Oligocene (about 25 million ago). Hence, the age of the erosion surface becomes progressively younger inland, as indicated in the diagram below.

There are three important regional unconformities in the geological record, and these are clearly distinct near the east coast, as shown in the diagram below: the basement unconformity where nonmarine sediments rest on schist (heavy purple line, irregular), the Waipounamu Erosion Surface (heavy red line, flat) where the sea transgressed across these sediments and basement, and the Marshall Paraconformity (heavy blue line) which represents maximum marine transgression and minimal sediment deposition. The Marshall Paraconformity is Oligocene in age (25-30 million years). These three unconformities become closer together spatially and in age farther inland, and in Central Otago they essentially coincide in a single flat surface. This surface in Central Otago has been modified slightly by Miocene (about 20 million years old) erosion and deposition, but the surface remained remarkably flat on a regional scale. Some minerals characteristic of marine sediments at the Waipounamu Erosion Surface have been recycled into the base of the Miocene sediments in Central Otago. 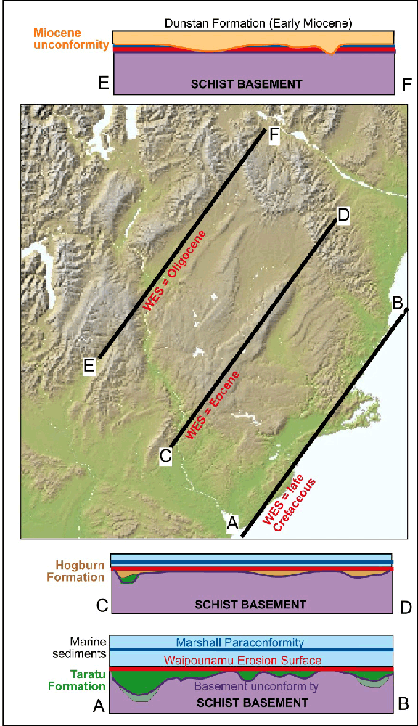 Sketch cross sections (vertical scale is exaggerated and approximate) parallel to the ancient coastline at three different times during marine transgression and formation of the Waipounamu Erosion Surface (red, WES). The sections are drawn without modern topography. In East Otago (section AB), the erosion surface cuts across basement hills, parts of the basement unconformity, and across the top of the nonmarine late Cretaceous Taratu Formationin valleys up to 500 m deep (and locally including the middle Cretaceous sediments such as Horse Range Formation). Farther inland (section CD), the erosion surface cuts across basement hills and the nonmarine Eocene Hogburn Formation (brown) in shallow valleys. In Central Otago (section EF), the Waipounamu Erosion Surface essentially coincides with the basement unconformity and the Oligocene Marshall Paraconformity, and has been slightly modified by the Miocene sedimentation of nonmarine Dunstan Formation (orange).

The Waipounamu Erosion Surface is now visible in the topography of East and Central Otago as broad areas in which the basement surface is essentially flat, with minor dissection by active rivers and streams, as shown in the maps below. The erosion surface has been folded and faulted by the rise of modern mountains, but is still remarkably continuous. The erosion surface is still fully preserved beneath the sediments of the inland basins, and beneath the Taieri Plain. On the ground, the erosion surface on schist basement is commonly studded with tors (outcrops 1-3 m high) which are made of slightly harder rocks that have resisted decomposition while softer rocks near the erosion surface have been removed by recent and ongoing erosion. Evaporating water trapped between tors on the erosion surface at the northern edge of the Barewood Plateau has led to formation of the Sutton Salt Lake.

Topographic images from across Otago, showing the variations in effects of young (last few million years) deformation on the flat Waipounamu Erosion Surface. The central panel shows the northeast margin of the schist belt in Central Otago, with smooth schist fold ranges trending northeast into the Blue Lake Fault Zone that juxtaposes schist against faulted and more-dissected greywacke and semischist. Farther west (left panel), the smooth ranges dominated by the Waipounamu Erosion Surface terminate with the Pisa Range at the Nevis-Cardrona Fault, and rugged schist mountains to the west of this fault have the erosion surface totally removed. Near the east coast (right panel), the Waipounamu Erosion Surface has been offset by faults, with the most prominent faults indicated. Between these faults, the flat erosion surface is largely preserved, as on the Barewood Plateau, although locally dissected. Fold ranges dominate topography inland of Middlemarch.

Sediments below the Waipounamu Erosion Surface 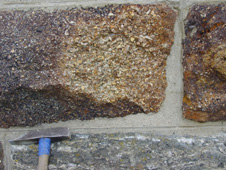 Blocks of Eocene (40 million years old) Hogburn Formation quartz gravels (top and right) in a bridge of the Otago Central Rail Trail at Tiroiti, north of Hyde. The gravels have been cemented by iron oxyhydroxide produced from weathering of pyrite (FeS2). These gravels rest on the basement unconformity on schist (lower block). The Waipounamu Erosion Surface and associated marine sediments occur immediately above the gravels in nearby outcrops

Fluvial (river) sediments immediately beneath the Waipounamu Erosion Surface typically grade upwards into estuarine sediments and then to fully marine sediments at the erosion surface. The estuarine conditions led to accumulation of abundant pyrite (FeS2) within the sedimentary pile, and that has subsequently been moved around in the rocks by groundwater. Some quartz gravels were fully cemented by pyrite in this process. Oxidation by later groundwater flow during uplift and erosion transformed the pyrite to brown iron oxyhydroxide cement, and these rocks also commonly have abundant yellow jarosite (K-Fe sulphate) staining at and near the erosion surface. Jarosite is indicative of acid rock drainage from the oxidation of pyrite, although the acid is neutralized by calcium carbonate in nearby marine rocks.

The uppermost 10 metres of schist or greywacke has been extensively altered to clay by groundwater beneath the overlying Cretaceous to Miocene sediments. This process has occurred beneath  the basement unconformity, the Waipounamu Erosion Surface, and the Miocene unconformity where all these surfaces approximately coincide in Central Otago. This groundwater alteration has transformed most of the basement minerals to kaolinite clay, leaving only the quartz unaffected. Some of the alteration reactions preferentially attacked muscovite mica, leaving feldspars largely unaltered, whereas some alteration affected the feldspars with only minor alteration of the muscovite. All alteration reactions have left soft rocks that are readily eroded, and the alluvial gold miners commonly removed that soft material as well as the gold-bearing gravels above the unconformities. 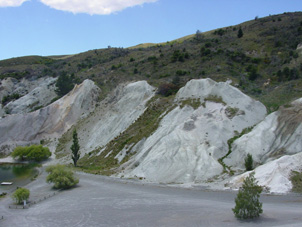 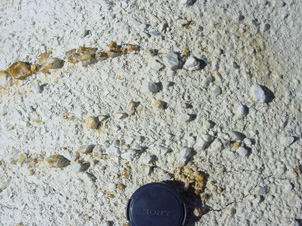 Clay-altered greywacke (white soft material) and remnants of metamorphic quartz veins (angular pebbles) in an outcrop below the Miocene unconformity at Blue Lake. 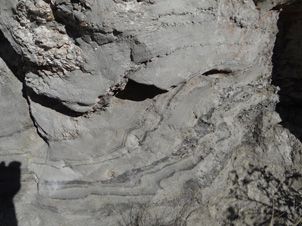 Clay-altered schist outcrop (1.5 metres high) immediately beneath gold-bearing Miocene quartz gravels at Pennyweight Hill alluvial gold mine. The swirly grey and black layers (lower half) are remnants of foliated and folded bedding in the schist. Paler materials in top half are metamorphic quartz veins.

Erosion at the Waipounamu Erosion Surface

The clay-rich alteration zone beneath sediments at and near the Waipounamu Erosion Surface is readily stripped by erosion when exposed by uplift. Hence, the clay is largely absent from large areas of exposed schist. These areas typically have some scattered boulders of quartz gravels that were cemented by silica (silcrete, or “sarsen stones”). The surface also hosts scattered alluvial gold from those overlying sediments, as well as gold eroded from exposed quartz veins in the underlying basement. Considerable mining of alluvial gold occurred at Macraes (see map below) before the present basement mine opened, and this gold was derived from the Eocene sediments and from basement gold whose grain size was enhanced by chemical dissolution and reprecipitation in the surface oxidation zone near the unconformity. Recent fault movements have exposed fresh basement at Macraes, along the Macraes Fault, and the youngest sediments contain unoxidised pyrite and arsenopyrite, as in the photograph below. 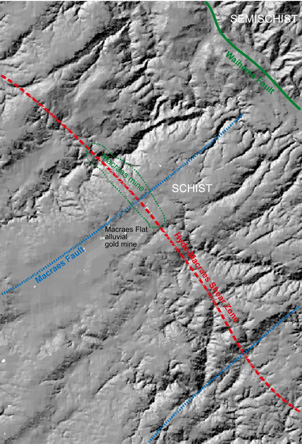 Topographic image of the flat and weakly dissected Waipounamu Erosion Surface in the vicinity of the Macraes gold mine on the gold-bearing Hyde-Macraes Shear Zone. Scattered remnants of Eocene quartz sediments occur on the flat surface. Minor recent reversal of northeast trending Cretaceous normal faults (blue) has offset the erosion surface on the 10-100 m scale locally, forming shallow sedimentary basins, including Macraes Flat, an alluvial gold mine before the basement gold mine was developed. The erosion surface dips shallowly to the northeast where it has been upthrown by the Waihemo Fault, and the fault scarp is deeply dissected (top right). 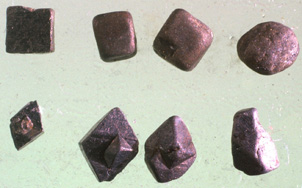 Grains of pyrite (FeS2, top row) and arsenopyrite (FeAsS, bottom row) from young (12000 years old) alluvial gold-bearing sediments at Macraes Flat. The largest grains are about 2 mm across. These gold-bearing sulphide minerals were eroded from unoxidised basement schist exposed when recent movement on the Macraes Fault offset the oxidized zone beneath the Waipounamu Erosion Surface. The grains on the left have been little affected by sedimentary transport, and still have their sharp crystal shapes. The grains on the right have been partially rounded by transport.