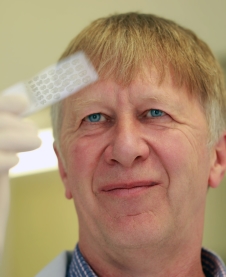 “Essentially what I’m interested in,” Stephen says, “ is cell signalling, and how cells respond to external signals.” Over the years Associate Professor Stephen Bunn’s interests have honed down to look at not just any cells, but specifically how neuroendocrine cells respond to signals. This response could be to hormones, neurotransmitters, or drugs that impinge upon the receptors of those neuroendocrine cells. His current work focuses on the cells of the adrenal medulla, which are involved in the stress response, as well as cells in the hypothalamus. “You have these cells in your adrenal glands above your kidneys, and these neurons in the brain and they sound very different,” he says, “but there are a number of similarities.”

Both groups of cells release their contents into the blood, rather than releasing neurotransmitters to adjacent neurons, and the neurotransmitters they release are very similar; they both release catecholamines. In the hypothalamus Stephen examines the release of these catecholamines from the hypothalamus into a very specific blood supply that stimulates the release of prolactin from the pituitary gland; in the adrenal medulla he examines the release of catecholamines into the wider blood stream to allow the body to respond to stress. “On the face of it it can seem like a very split existence, but actually when you look at these cells closely you realise they’re really quite similar, and things you’ve learned from one cell could be applied to the other and vice versa.”

Stephen’s lab uses two main methods of investigation: examining isolated cells in culture, and examining transgenic animals. “we can use immunohistochemistry to identify cells that have responded to prolactin, for example, and then we can say ‘is this a true prolactin response?’ by creating a transgenic animal without prolactin receptors either in the whole brain or a specific group of neurons.” The ability to slide back and forth between whole animal models, which are messy but more generalisable to functioning animals, and isolated cells, which allow you to see individual effects but lack that generalisability, enables Stephens lab to effectively refine their theories and make real progress.