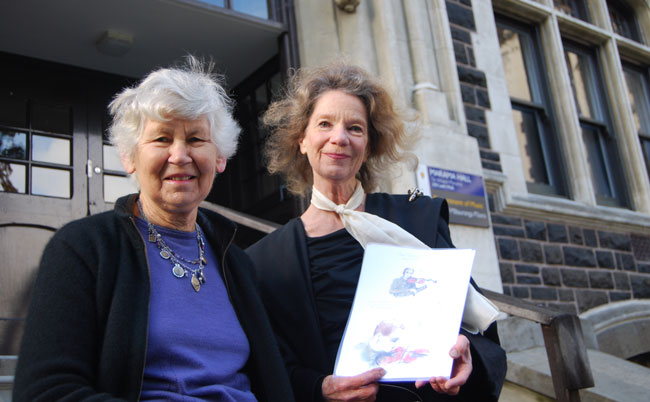 The 2015 University of Otago College of Education/Creative New Zealand Children’s Writers in Residence Jennifer Beck (left) and Robyn Belton with some of the working sketches from their book.

The moving story of a Dunedin soldier and the violin that accompanied him in WW1 is being turned into a picture book by this year’s University of Otago College of Education/Creative New Zealand Children’s Writers in Residence Jennifer Beck and Robyn Belton.

The pair, who are among New Zealand’s most accomplished children’s writers and illustrators, are sharing the Fellowship to write the book together. The Bulletin met them as Jennifer finished up her three months, with a working draft of the story written, and Robyn prepared to begin her three-month stint bringing the book to life with illustrations. 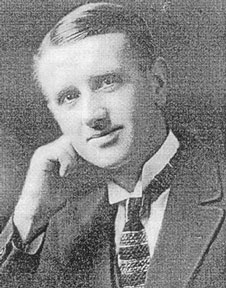 Jennifer Beck and Robyn Belton are passionate about the story of Alexander Aitken.

One hundred years have passed since the Dunedin soldier and his comrades landed on the Gallipoli Peninsula, and almost 50 since he died, but the pair talk so enthusiastically about him that it almost feels as though they are speaking of a friend.

Alexander Aitken was one of the greatest mathematicians of his era. He could recite Pi to 707 decimal places and multiply two nine digit numbers in his head in 30 seconds. An Otago graduate and former President of the OUSA, he went on to become a Professor of Mathematics at the University of Edinburgh.

But it is his time in WW1 that forms the basis of Jennifer and Robyn’s story. Aitken, who had taken some violin lessons during his school years, won a violin in a raffle on board the ship taking him to Gallipoli. This violin accompanied him through the war, bringing music to him and his fellow soldiers. The violin eventually followed Aitken home and is now kept on display at his former school Otago Boys High School.

"To have carried the violin into a war zone is an amazing achievement. A humble, cheap violin, that became a cherished instrument, a treasure."

Jennifer says the idea for the story came to her when reading Alexander Aitken’s own memoir Gallipoli to the Somme: Recollections of a New Zealand Infantryman, and also Associate Professor Peter Fenton’s book about Alexander: To Catch the Spirit, memoir of AC Aitken.

“Every now and then a little sentence about the violin would come up,” she says. “I put markers in, thinking ‘that could be a children’s story’.”

She spoke to Robyn about the idea, and she too had heard of Aitken and his violin.

“It is a war story, but we didn’t want it to focus on the tragedy and violence,” Jennifer says. “It is more about the companionship and solace music can give at a difficult time.”

Robyn explains, “It is also about making history accessible to children.” 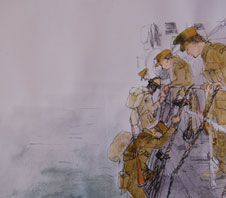 A working sketch from the book - the landings at Gallipoli.

Jennifer adds, “It is also to honour the man himself, whom we have come to admire greatly.

“So many images stood out to me. In his own book he speaks of climbing down from his ship in Gallipoli on a rope ladder, holding the violin case. His packs were so heavy but it was so important to him to carry the musical instrument. At times he almost despaired of carrying it. But his fellow soldiers offered to help as they had come to value it too.”

Robyn says, “To have carried the violin into a war zone is an amazing achievement. A humble, cheap violin, that became a cherished instrument, a treasure.”

Jennifer and Robyn have joined forces for four books in the past, including the The Choosing Day, David’s Dad and The Christmas Caravan.

While neither sees themselves as war writers, war is an ongoing theme for each of them. Robyn illustrated Joy Cowley’s The Duck in the Gun which, with its powerful anti-war message, was one of ten children’s books selected for the Hiroshima Peace Museum. Together they created the award-winning The Bantam and the Soldier, New Zealand’s first picture book to tell the story of New Zealand in WW1.

"We’re great friends. We tend to see things in much the same way."

“It’s really about bringing history to life,” Robyn explains. “Real stories are so rich. Also they tell us about ourselves.”

Their friendship is evident as they chat (Robyn: “I’ve threatened to let down the tyres on her car so she can’t leave!”), and their shared zeal for this story seems set to ensure the finished book will be something remarkable.

“We’re great friends,” Jennifer says. “We tend to see things in much the same way.”

On being in Dunedin

The shared six-month fellowship has seen the normally Auckland-based Jennifer living in Dunedin for the first three months and living at the Robert Lord Cottage. The residency is offered in association with the Robert Lord Trust which provides rent-free accommodation to writers in the historic Titan Street cottage bequeathed by the late playwright Robert Lord. This gave the two the opportunity to spend plenty of time together before Jennifer returned to Auckland and Robyn took on the second half of the Fellowship.

"I’ve almost had the feeling that he’s been walking with us, particularly when we went on our first foray to the Peninsula..."

They both believe in the importance of working closely together on a picture book, and tried to immerse themselves in Alexander’s world.

“Doing the story here in Dunedin, particularly for me as an Aucklander has been wonderful,” Jennifer says. “I’ve seen the places he lived, the Peninsula he loved to walk on, and met his some of his relatives.”

Robyn agrees. “I’ve almost had the feeling that he’s been walking with us, particularly when we went on our first foray to the Peninsula, which was his favourite place and the place where he spent his childhood. We tried to walk in the places he loved and stand in his favourite place overlooking Sandfly Bay.”

Being based in the University’s College of Education has also been a privilege, Jennifer says. “We have really welcomed the opportunity to work in such a supportive and well-resourced environment that values children’s literature.”

The pair join a long line of well-known children’s authors to have held this fellowship – and say it has been a pleasure and an honour.

A working sketch from the book - Alexander plays his violin.

Since the Bulletin interview, Jennifer has returned to Auckland (tyres intact!) and Robyn has been working in earnest on the illustrations.

Jennifer left Robyn with a written story, a working draft which she planned to modify as Robyn’s illustrations brought the story to life.

The book, with a title yet to be decided, will be released around Anzac Day next year.