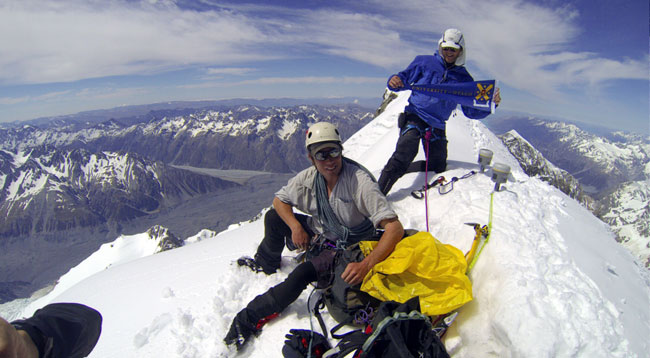 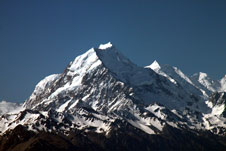 While currently officially listed as 3,754 metres above sea level, analysis of high accuracy GPS data obtained during an Otago-led climbing expedition in November last year reveal that it is actually only 3,724m tall at its highest point.

Dr Sirguey, the project leader for the research, says that the discrepancy between the old height (estimated from aerial photography immediately following a massive rock-ice collapse on 14 December 1991) and the new height can be explained by a two-decades-long reshaping process affecting the remnant of the originally thick ice cap.

“By carefully studying photos taken after the collapse, it appears that there was still a relatively thick ice cap, which was most likely out of balance with the new shape of the summit ridge. As a result the ice cap has been subject to erosion over the past 20 years. While the effects of climate change may spring to mind as an explanation, it is probably a case of a simple change in the geomorphology of the mountain.”

Despite being taken down a peg or two, Aoraki/Mt Cook still towers above its close neighbour Rarakiroa/Mount Tasman, which with its current official height of 3497m, remains the second highest mountain in New Zealand.

The new GPS measurement is only the sixth non-aerial accurate survey of the mountain’s height ever to be taken, with the previous trigonometric measurements made in 1851, 1879, 1881, 1883 and 1889, says Dr Sirguey.

The four-person Otago expedition that obtained the GPS data took place on Saturday 23 November 2013 and was led by Dr Nicolas Cullen, a Senior Lecturer in the Department of Geography at Otago.

"...we suspected that Aoraki was tens of metres lower that the official height, so it is very satisfying to have our estimates validated by GPS."

Jim Anderson (Survey Waitaki), a recent graduate from the National School of Surveying, and Dr Cullen were responsible for taking the GPS measurements, with the pair guided up and down the mountain by Geoff Wayatt and Brian Weedon of Mountain Recreation Limited.

To observe Aoraki’s tapu status, and as agreed with Ngāi Tahu and the three Papatipu Rūnanga who have a shared mana whenua interest in Aoraki, the climbers did not step on the summit, but instead took measurements with recently acquired state-of-the art Trimble R10 receivers while at the top of the ice cap a few metres away and below the true summit. An additional GPS point was measured at the top of the Summit Rocks for further validation of Dr Sirguey’s photogrammetric 3D model.

“It was very exciting to see that the team’s GPS data closely matched our photogrammetric calculations from a 2008 aerial survey. From early on in this work we suspected that Aoraki was tens of metres lower that the official height, so it is very satisfying to have our estimates validated by GPS.”

A further aspect of the project involved a “tribute” trigonometric survey undertaken by second-year surveying student Tyler Hager as part of his summer scholarship work. Using a Wild T3000 precision theodolite from the National School of Surveying, Tyler made observations from several locations with a line of sight of the summit.

Dr Sirguey says that Tyler’s measurements reproduced some of the complexities that the early surveyors encountered when estimating the height of such prominent peaks. Nonetheless, this traditional surveying approach also took advantage of new technologies such as Geographical Information Sciences (GIS) and geo-visualisation to facilitate the identification of appropriate viewing points.

“As well as being a valuable teaching opportunity, his project also helps place our latest findings within New Zealand’s rich history of surveying and acknowledges the legacy of early surveys, surveyors, and survey techniques.”

Mandy Home of Arowhenua, Ngāi Tahu, acknowledges the work of Dr Sirguey, the Master's students of Otago University and the organisations that supported this effort.

“Aoraki is culturally significant to Ngāi Tahu and we as a people refer to Aoraki as our ancestor. The fact that Pascal and his team made contact with Ngāi Tahu prior to commencement of the re-survey project is commendable. The team’s subsequent development of a specific methodology to avoid standing on the summit of Aoraki was also greatly appreciated,” says Home.

A private presentation of the team’s results to Ngāi Tahu first was a further important acknowledgement by the team of the role of Ngāi Tahu as the kaitiaki of Aoraki, she says.

Land Information New Zealand (LINZ) was among several organisations that provided financial and scientific support for the project. Its Chief Geodesist, Graeme Blick, says LINZ has followed the research with interest.

“It’s a significant change that the Otago team has recorded and we’ll update our data to reflect these findings. This means LINZ online data will use this new height and it will be incorporated when we next print hard copy topographic maps for the Aoraki/Mount Cook region.”

GNS Science Head of Regional Geology, Mr Phil Glassey, says that “we are pleased to be supporting the Surveying School and the collaboration in photogrammetry and geo-visualisation is providing mutual benefit.”

Other sponsors and supporters of this project include Southern Approach Ltd, who loaned two GoPro cameras to document the climb, the Federated Mountain Clubs of New Zealand (FMC), who provided financial support, and the New Zealand Institute of Surveying (NZIS).