Els Noordhof was an influential figure in the Dunedin art scene who gained national recognition as an illustrator and, particularly, for her portraiture. She has also made a significant contribution to the Hocken Collections. 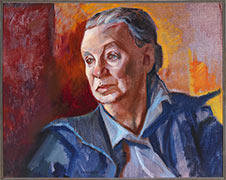 Els (Elisabeth Johanna) Noordhof was born in Bloemendaal, Holland, in 1924 and, despite the difficulties of living in a Nazi-occupied territory, graduated from the Rijksmuseum Academy with a Master of Fine Arts in 1945 – and a life-long appreciation of the concepts of freedom and light.

Noordhof considered herself a citizen of the world: she’d lived in war-torn Europe, Bertrand Russell’s Cambridge (her etching of him was gifted to the Hocken in 1996 as part of the Arthouse Print Portfolio, 1995), Dylan Thomas’ London, the United States during the years of McCarthyism and the Vietnam War, and, finally, New Zealand where she was delighted to find another land of light never far from the sea.

Over the decades, she became an important and well-known member of the New Zealand art community, working both 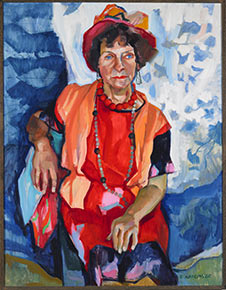 as a tutor and a practising artist. She held countless solo exhibitions around the country and was widely collected. In 1974 and, again in 1976, she won the Kelliher Art Award for portraits, followed by the IBM Art Award at the New Zealand Academy of Fine Arts, Wellington, in 1986.

Working in a variety of media, her art remained “an individual creative journey, and often a very private one”. She claimed that this left her free to choose her own directions “without regard to the tyranny of trends”. She also claimed to have been mainly interested in people, “not as symbols, but as humans in their multifarious moods and passions”.

In addition to her portraiture, she was a highly-regarded book illustrator, and worked on a number of projects undertaken by the University of Otago Library’s Bibliography Room. She was also an instructor, with Doris Lusk and Colin McCahon, at the University’s Summer School in Kurow. The portrait of Olivia Spencer Bower was probably painted there.

Towards the end of her life Els Noordhof gifted seven portraits to the Hocken, adding to the five of her works already held. Among them are portraits of writers and artists – Bower, Ken Downie, Hardwicke Knight, Eion Stevens, Annie Baird and others.

This is a significant gift to the Hocken, not only because of the quality of the works and the important place Noordhof held in the Dunedin art community, but also for the way these paintings interact with the rest of the collections. Hocken Librarian Sharon Dell: This gift has research value for future scholars, it relates well to other collections we hold, it illustrates her creative partnerships and it is evidence of Els’ influence as a teacher.”

A Micronaut in the Wide World: The Imaginative Life and Times of Graham Percy. Toured by Exhibition Services.
15 June – 11 August