Cresating the waves … and plumbing the depths

Cresting the waves …
and plumbing the depths

Purchased through the Leading Thinkers development initiative, the RV Polaris II is proving to be an invaluable research platform for Otago scientists.

"We said at the start this was going to transform the way we work – and it's true – it has."

It's a succinct summation, but Professor Gary Wilson can back it up with many examples of research University of Otago scientists would have never been able to tackle without the RV Polaris II.

The 21-metre refitted former fishing boat was purchased seven years ago through the Leading Thinkers Initiative and now provides a vital platform for a wide range of marine and environmental science, from the quiet waters of Otago Harbour to the remote seas around New Zealand's sub-Antarctic islands. 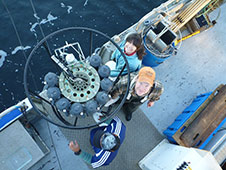 "You can take this whole research facility to where you need it, whether it's Fiordland, whether it's Stewart Island, or whether it's the Auckland Islands or Campbell Island," Wilson explains.

"It's research that the University never used to do – in fact, it's research that was never done because you couldn't get there. Once you're there you need to be able to do the research and so the Polaris provides all of that."

Wilson says one of the vessel's strengths is its large back deck which he describes as being its research powerhouse.

"You can launch remotely-operated cameras and vehicles off it, put the rosette sampler out to pull up water from whatever depth, or use coring equipment. Anything you do on a big ship you can do on the Polaris, which is pretty cool."

Once sample material has been retrieved, researchers can then perform basic analyses in the lab and secure the materials in fridges and freezers so they can be taken back to the University. They can even put a separate “clean lab” on the back deck of the boat so samples can be brought in for chemical analysis without being contaminated.

"It's a small boat, but it is very cost-effective. It can transit from place to place, but once you get to a safe haven to anchor you can work on the samples you are collecting in real time."

In expedition mode Polaris II can take up to 15 people, including four or five crew. It is taken away for about 200 days a year and can be self-sufficient for up to 30 days in one trip.

Wilson has recently come back from a trip to the Auckland Islands where the boat was based for two weeks, working without even an hour of downtime.

The trip focused on the last 20,000 years of Earth history and what it can reveal about climate change.

"Twenty thousand years ago we were in an ice age. Between about 18,000 and 10-12,000 years ago we warmed Earth up and everything adjusted to cope with that," he says. "My interest is in looking to see how the natural Earth's system adjusts as you warm it up – what direction do things move in and what does it look like?"

"There is nothing linear about it and there is nothing that predictable about how it all unfolds, although with a bit of work we should be able to understand how that all comes about, and that is what this research is all about."

The Auckland Islands are the perfect place to work out how much of the change was influenced by Antarctica.

"Antarctica is kind of the engine we're all interested in. It's got most of the ice. It's the thing that is cold enough that it drives the Equator-to-pole temperature gradient, which is the thing that controls atmospheric circulation.

"The Auckland Islands and the New Zealand sub-Antarctic are right under that sweet spot. So, if you want to look for change and understand change, that's the sensitive spot. We could never have done that work without the Polaris."

Wilson says that even if you were a researcher based in another part of the world, if you were picking the place to work, it would be there.

"It's a good barometer for global systems and a great training ground for students and a great place to do the research on your own doorstep so we should make more of it."

Polaris II provides an excellent platform for Rayment's research on southern right whales and, for the last four years, he has led winter expeditions to their primary calving ground, the Auckland Islands.

It takes about 40 hours to get there, and Rayment says Polaris and her crew have proved very capable in wild, Southern Ocean conditions. Once there the vessel acts as a floating base for their research and is able to carry up to three tenders from which they conduct their work.

"Polaris is a huge asset to the University – she has opened up research opportunities in the sub-Antarctic islands which otherwise would not have been possible. Lying at anchor in Port Ross, tucked up in your bunk below deck on Polaris listening to the calls of southern right whales is a truly magical experience."

Gorman uses the Polaris II for collecting seismic-imaging data to create pictures of sea floor strata in the same way that medical imaging makes pictures of the inside of a body.

These images help in a range of ways, from improving understanding of active faults on the sea floor to characterising sediments deposited during ancient glacial periods to better understand past climate changes.

"Our coast and continental shelf contain numerous dynamic features that are very much affected by ongoing processes linked to climate, oceanic circulation and tectonics. For example, just 30 kms from the mouth of Otago Harbour lie the tops of several world-class submarine canyons that act as conduits carrying sediments – derived in the central part of the South Island and carried to the coast by rivers – into deeper water."

For the last 13 years, Hunter's research group has been running a regular – about bi-monthly – transect across the Otago Shelf, initially using Munida and now its replacement, Polaris II.

"We measure aspects of the oceanic carbon dioxide system, including pH and CO2 partial pressure. This is a long-term study designed to see if uptake of CO2 by the ocean in this region can be directly measured. The short answer is that, yes, it can. The rate of pH change and CO2 uptake is experimentally indistinguishable from similar measurements made in the northern hemisphere."

As well as this regular sampling exercise, most of the trips include other research by the group, particularly around the behaviour of biologically important trace metals such as iron, zinc and cadmium.

This year the Polaris has already collected Benthos C3D data in the Auckland Islands, as well as providing a base for hydrographic surveying operations from a smaller vessel.

"This data will be used for habitat mapping and process modelling – exciting hydrographic research work that is just beginning at the School of Surveying," says Tidey.

"Being able to travel far from Dunedin, with accommodation and adaptable equipment and crew, makes the vessel ideal for many types of University research. Working at sea is always an interdisciplinary exercise and a comfortable working environment greatly aids this."