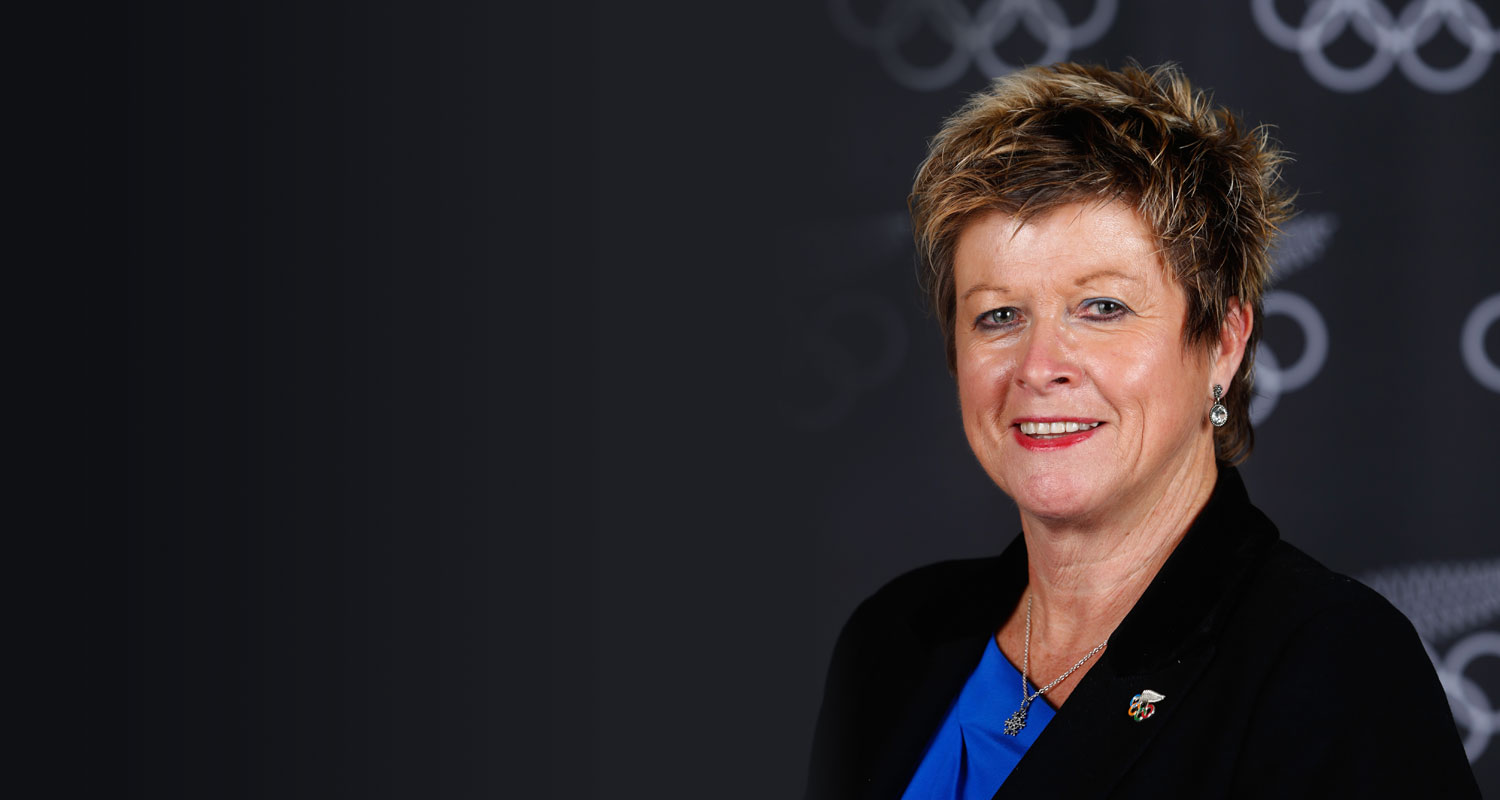 A horse-riding accident curtailed a young Kereyn Smith’s own sporting activities so, instead, the now Secretary General of the New Zealand Olympic Committee channelled her considerable talents and energy into sports administration.

Growing up, Kereyn Smith dreamed of being (a) a farmer and (b) an All Black. That’s how it is when you live on a farm in Clinton with lots of brothers and cows and horses, and where rugby is an important social glue for the community.

Smith has achieved neither of the above, but no one could say she has let the grass grow under her feet. Instead of a career on either paddock she has become a consummate team leader off it, and is today one of New Zealand’s most experienced and highest achieving sports administrators.

Of course, in the sporting arena it doesn’t get any higher than the Olympic Games. In 2010 Smith was appointed Secretary General of the New Zealand Olympic Committee (NZOC), the pinnacle (so far – there is bound to be more to come) in a career that has encompassed being private secretary to the Minister of Sport, Fitness and Leisure; general manager of the Hillary Commission; and CEO of the New Zealand Academy of Sport.

Smith also chaired the board of Netball New Zealand for six years, was vice-president of the International Federation of Netball Association, has been a trustee for the Forsyth Barr Stadium and Skeggs Foundation, a director of the Highlanders’ rugby franchise and is an advisory committee member for the New Zealand Rugby Union. And, in 2004, she returned to the University of Otago as a Council member, a role she held for 10 years.

In part, Smith attributes the pragmatism and can-do attitude that have got her this far to her rural upbringing. Small schools and small communities, Smith says, provide more leadership opportunities – a factor that contributes, she believes, to the disproportionate representation of women from rural backgrounds in the lower levels of sports leadership.

Despite this fertile ground, however, women generally are still woefully under-represented at the governance level in sport (as in the business sector). A 2012 audit of 55 national sports organisations found that 89 per cent had less than 50 per cent female representation on their boards and just over half reached the International Olympic Committee (IOC) target of 20 per cent representation.

Because all national sports organisations are members of the NZOC, it’s Smith’s job to keep a watching brief on this issue. So why, when women all over the country contribute at least equally to keeping the wheels of both community and elite sport rolling, does the "grass ceiling" persist?

“How people are elected [to governance roles] is not always that friendly for women,” says Smith, “and sometimes it’s not possible for women to dedicate the time that’s necessary. But some of the barriers are institutional issues that need constitutional change and, also, there needs to be wider acceptance of the fact that greater diversity and inclusive policies create a better organisation that connects more strongly with membership.”

Smith says that with effort, advocacy and support – and “a little bit of naming and shaming” – the NZOC has helped improve women’s representation on national sports bodies over the last three years to an average of 31 per cent – with the exception of our so-called national sport, rugby, for which there are currently no women on the board.

“They would put that in a work-in-progress basket,” says Smith, who suggests the success of the Black Ferns and the inclusion of Sevens for both men and women in the Olympic Games presents “a massive opportunity” for rugby to improve its connection with female athletes and address the paucity of women among the code’s senior leadership.

“As guardians of the Olympic movement in New Zealand [the NZOC] likes to think we’re a country that projects inclusiveness. We like to be advocates for women in leadership throughout the organisation and role models in that regard.”

The NZOC’s own initiatives include the Aspiring Women’s Olympic Leaders programme which supports female athletes to transition from the field of play to leadership positions in the work place. It also supports the monitoring of gender balance on national sports boards and promotes the Women in Governance programme. Constitutional changes and appointment policies have also addressed gender balance on athlete, education and other commissions and the NZOC’s own board.

This commitment has seen the NZOC increase the number of women in decision-making and leadership positions throughout the wider sporting sector. As a result, in November 2015 it was recognised with the IOC World Trophy for Women in Sport – the first time the award has been presented to a New Zealand organisation or individual, and a first for any national Olympic Committee.

“At the London Olympic Games, 47.3 per cent of our athletes were female and 50 per cent of the gold medals were won by women,” Smith says. “We know that, through sport, women can both build and demonstrate the same qualities that also make great leaders.”

Smith’s own transition to sports leadership was largely due to injury – a common pathway for many athletes. In her sixth-form year she was thrown from a horse, breaking her leg and smashing her knee. While this did not deter her from pursuing a Diploma in Physical Education at Otago – she graduated in 1982 – the repaired leg could never sustain the level of activity required for elite sports success, so she opted to pursue her passion for sport through teaching.

Smith taught physical education in New Zealand and the United Kingdom before taking on her first formal sports management position at Sport Manawatu, but she has also consistently been part of the volunteer backbone of community sports in both coaching and administrative roles. This involvement saw her rise to the board of Netball New Zealand, which she chaired for six of an 11-year tenure. During this time she helped guide the transformation of the code from amateur to semi-professional status, an experience she describes as “fundamental” to her own professional development.

“Over the years I’ve learnt as much from my volunteer activity as I have as a professional,” says Smith, who believes participation in the various aspects of community sports is critical to community health.

“Clubs, sport, physical activity, volunteering, leadership and coaching are about giving back, teaching, growing and learning new skills. It’s really healthy for communities to have that vibrancy and, in fact, I believe it’s one of the pillars required for a healthy community."

Motivating young people to be active and keeping adults interested in volunteering is vital, she says, and although in her current role her focus has shifted to elite participation on an international scale, the Olympic values she champions – excellence, friendship and respect – are applicable to all and promote sports participation at all levels.

Smith’s current job, she explains, is a mix of business, sport, diplomacy and relationship-building. “Prior to Games, it’s about funding and international advocacy, then in the lead-up to Games it’s about planning and attendance, and connecting with international sports organisations, coaches, team members and athletes.”

Her role also includes maintaining government relationships, overseeing the NZOC’s diverse activities and generating revenue. Funding is an on-going challenge; the NZOC receives only 20 per cent of its funds from government, with the balance coming from philanthropy and partnerships with commercial organisations.

“It’s challenging because it’s not getting any cheaper and our teams are getting bigger; we’re also moving horses and boats. In the four-year period that will culminate in the 2016 Olympic Games we will have had Winter Olympics in Sochi, Commonwealth Games in Glasgow and the Olympic Games in Rio de Janeiro.

“Those are remote and costly destinations and complex places to plan and execute – Rio is about 30 per cent more expensive than the last Olympics, for example. We need to be creative in how we resource that.”

Given such challenges, optimism, resilience and passion are important qualities for the job but, Smith adds, “when you’re talking about galvanising a team of people, inspiring a nation and portraying an image of excellence and the Olympic values, it’s not hard to be passionate. Who couldn’t get out of bed and be excited about that?”