Rock music has been a defining force in Dr Ian Chapman’s life as a musician, performer and academic. It is also the inspiration for his flourishing career as a writer. 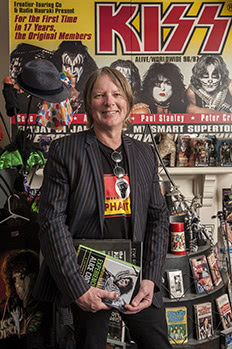 Dr Ian Chapman: “I always wanted to be a rock star and a writer, but I'm pretty comfortable being more the latter these days.”
Photos: Alan Dove

The more music becomes synonymous with popular culture, the more it reveals about modern life.

So what once might have been seen as an unusual subject for university analysis — an early Otago degree studying rock music — has now come of age.

For musician, performer, academic and author Dr Ian Chapman, it has helped spawn more than half a dozen books, with more on the way. He recently launched Experiencing Alice Cooper: A Listener’s Companion (Rowman & Littlefield 2018) with a mini-concert in Dunedin, and November has him launching his latest title, David Bowie FAQ (Hal Leonard 2018).

It’s an impressive output, particularly considering Chapman is also head of Otago’s Performing Arts Programme, a senior lecturer in Contemporary Music, and continues to perform in various guises and give talks in New Zealand and overseas.

He’s also working with researcher Sarah Gallagher on a scheduled launch of Scarfie Flats (Imagination Press 2019) and his 10th book is slated to feature the band Blondie.

After that Chapman’s considering a slightly retrospective effort with the working title of Lessons we can learn from the performing arts and how they can improve our lives. “It would be kind of my story — what happened to me.”

It may sound like a self-help manual for bedroom guitar virtuosos, but Chapman has certainly walked the talk and his story is inspirational at many levels.

His previously happy childhood was rocked around the time he moved to high school in 1973. “My mother was in hospital with cancer and was not expected to come out and my father had a job that involved a lot of travel, so my sister and I were shipped around quite a lot. I'd also just started at a high school that was very sports oriented. I was a diminutive kid with an androgynous look who was interested in music and the arts, so I very quickly attracted the attention of a large and well-organised group of bullies. It wasn't a good year.”

“But at the same time I discovered glam rock and David Bowie and he became a role model for reinventing yourself in your own idealised image. I didn't think of it like that at that time but, for me, Bowie and music and the arts were a life-saving escape. I learned from people like Bowie and Alice Cooper that — even if you are a New Zealand male — there are options other than having to aspire to become an All Black. You can become something even more exciting.”

As Bowie’s Ziggy Stardust morphed into Aladdin Sane and the Thin White Duke, Chapman managed to survive school and worked in a factory building grain silos before heading to the UK on his OE, chasing the music.

“I hoped to find glam rock alive and well but, by then, the music scene had moved on and I discovered punk instead. Part of me always wanted to be a musician, but it didn't happen straight away.”

But it did happen. Shortly after returning to New Zealand in 1981 he became a professional drummer and worked with the likes of Billy T. James and Rob Guest. However, as the gigs and the road trips piled up, he found he wanted to know more about music in general. He took up classical guitar and tracked down the best tutor he could find — Dr Susanne Court.

“She was on staff at the University of Otago, so I came to Otago to study music with her in 1990. I wanted to know more about the nuts and bolts of music, and to understand things like harmony and melody and how constructing music worked. I also wanted to engage with classical music as well as popular music. I never thought I'd end up as an academic.”

After graduating, Chapman moved to Christchurch. His then wife had supported him during his music degree in Dunedin, so it was now his turn to support her studying jazz in Christchurch. Teaching wasn’t part of the score, but Chapman continued to perform, adding guitar and vocals to his repertoire, and developing outlets for his music.

Then Otago Music Department stalwarts Professor John Drummond and Dr Graeme Downes came up with the alternative idea of a rock degree course. They needed someone with the right credentials to teach it. It wasn’t long before Chapman got a call.

“They invited me to join the staff at Otago. I loved Dunedin — it’s a great place to live — so I jumped at the chance. But as I only had an undergraduate degree I had to enrol to do a master’s as a condition of my ongoing employment.” After graduating and teaching, Chapman progressed to a PhD — an iconographical study of David Bowie’s album covers from 1967 to 1980.

Popular music studies once raised eyebrows in academia, but time has moved on.

“Back then it was definitely the new kid on the block, but not now. It’s still unusual as a subject, but it's becoming much more acceptable. Rock music was the youth phenomenon of the 20th century, starting from Delta blues going through things like the British invasion of America to the present day.”

For a long-term entertainer like Chapman, teaching came naturally.

“Teaching is performance. It feels pretty much the same thing as being on stage. It would be the worst thing in the world for a lecturer teaching performing arts to be monosyllabic and dull.”

Following the success of contemporary music studies, Otago developed its Performing Arts degree, which combines music, theatre and dance. It was an obvious progression for programme head Chapman.

“Music was never something I took in only through my ears. It's very much a visual thing for me. Attending concerts by David Bowie and Alice Cooper in the ’70s blew me away visually as well as aurally. Music is there to be ‘performed’ in every sense of the word. So music, theatre and dance come together naturally in the performing arts. The degree engages with all of them.”

Talented students struggling with performance issues can draw inspiration from Chapman’s carefully contrived suite of alter-ego entertainers. He drew on his own school-time glam rock fantasies to give birth to characters ranging from the platform-booted Dr Glam (recently retired — except for special occasions) through the anagrammatic and more twistedly cabaretic Mr Glad to the gloriously ghoulish Thaddius Grime — each created for different moods and different songs.

They help to show stage-struck students that it’s safe to put themselves into the spotlight.

“Some students can be great performers, but terrified when they get to the stage. We teach them how to silence those voices that rise up to criticise them from inside — that it’s okay to act differently when you're playing different people.

“It's about refining your ability to draw on different characters and convey different things from different parts of your own personality. And you're not faking anything. It's all part of you. You have a licence to play these characters because they’re inside you.”

As well as working on the physical skills of performing, the degree course develops critical thinking and arts theory — the whys and wherefores of the performing arts.

Chapman’s own performance career is lining up for a hokey horror video of My Favourite Things performed by Thaddius Grime, and a mini tour of Bowie songs with his latest line up, the Cosmic Jive Trio, featuring his ex-student Pania Simmonds and current student Liam Donnelly.

His writing career seems to run full tilt in the background, and Chapman credits the web’s Rock’s Backpages for invaluable research insights. “It’s an amazing resource — the ultimate library of rock music journalism and reviews. It’s a goldmine for articles going back decades.”

“David and Alice were actually great mates, but they were totally different from their stage personalities. David was the wild one of the two after gigs, while Alice liked to go home and turn on the TV and have a quiet beer.”

It’s important for Chapman to ensure his books bridge academia and accessibility.

“I adore writing, but finding the time to write can be really stressful. Sometimes I’ve had to ask for extensions to my delivery deadlines, which is really annoying for publishers with production schedules prepared well in advance. But being an academic is demanding too, and trying to find a life/work balance is particularly difficult with a couple of young kids thrown into the mix as well. So, yes, writing is stressful, but it’s worth it.

“I always wanted to be a rock star and a writer, but I'm pretty comfortable being more the latter these days. The fact that I’m now publishing my eighth book still takes me by surprise.”