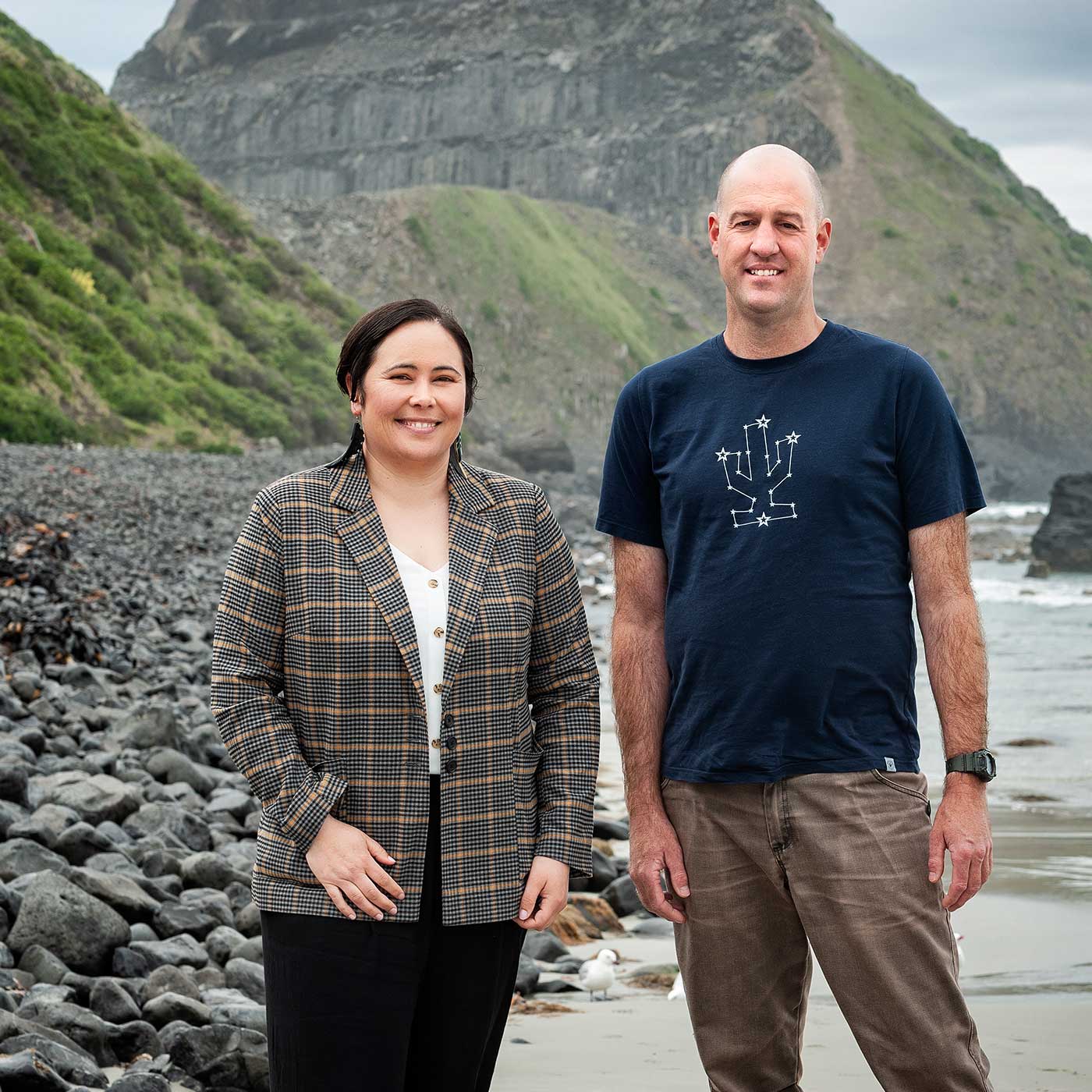 Associate Professors Anne-Marie Jackson and Chris Hepburn draw on the analogy of a double-hulled waka guided by Te Pae Māhutonga (the Southern Cross) to explain the vision of the new Coastal People: Southern Skies Centre of Research Excellence.

While there has been a lot of discussion at the global level about the effects of climate change and the threats of ocean warming, sea-level rise and ocean acidification, not so much is known about its local effects and what is happening in the coastal sea.

These issues will now be addressed by the new University of Otago-based national Centre of Research Excellence (CoRE), Coastal People: Southern Skies (CPSS), which sets out to examine the connections between human well-being and the health of marine ecosystems.

“Our mission is to connect, understand and restore coastal ecosystems through transformative research, local action and by unlocking potential by utilising new pathways to learning,” says Jackson.

Hepburn is a marine ecophysiologist, with a particular interest in kelp forests and their role in the coastal ocean, while Jackson has a Māori physical education, health and well-being background.

Their team of researchers, partners and community leaders have based their vision on the double-hulled voyaging waka (canoe) for their research programme, with Te Pae Māhutonga (Southern Cross) as their navigational aid for governance and management, including a focus on eminent Otago alumnus Tā Mason Durie’s model of well-being.

Jackson says both hulls of the waka –  one examining things marine and the other focusing on well-being – need to float.

“They are the two things that underpin it and then we have a platform to connect the two hulls. That’s our research: three programmes of research that cut across both hulls – connecting, understanding and restoring,” she says.

“Positive, forward-facing research on climate change is at the heart of what we are doing,” says Hepburn.

“It’s not so much about predicting or trying to force action from governments: there are lots of people already doing that. It’s more about, what do we know from research that’s been completed and what is the future – starting with the communities we are working with in New Zealand and then out into the Pacific – and what can be done?”

The CPSS waka also has two sails – one is voyaging and the other is innovation – meaning new ideas can be put forward.

Hepburn says the work will include some epic voyages across the Pacific in high-tech sailing waka, to undertake scientific work such as looking at the migration of sperm whales.

The CoRE will be guided by what Jackson describes as the four main stars of their Southern Cross – their governance group chaired by Tā Mark Solomon, their youth advisory board, a research advisory board, and their management group. The two pointers of the Southern Cross represent their values that are contained in the acronym MANA – meaningful, authentic, natural, action.

“We are values led,” Jackson says. “Those values of mana and kaitiakitanga – we’re not going to stray from those. When you’re working with communities you have to understand your kaupapa, the thing that’s right at the heart of what you’re doing.

“When you work with communities they expect a life-long relationship and this funding can support longer-term relationships,” adds Hepburn.

Both researchers point to the work that has been done with a local Kāi Tahu iwi, Kāti Huirapa ki Puketeraki, whose marae is located at Karitāne, as an example of how researchers can build a strong relationship with coastal communities.

“We’ve worked with them for 15-plus years, so we have already begun supporting local coastal communities,” says Jackson.

“Our mission is to connect, understand and restore coastal ecosystems through transformative research, local action and by unlocking potential by utilising new pathways to learning.”

There are also lessons to be learned from the prior experiences of Pacific peoples who came to New Zealand.

“We are working alongside Pacific academics and community leaders in Aotearoa and the Pacific to support the realisation of their aspirations. This includes the leadership of Pacific peoples throughout all levels of CPSS, and targeted research projects and capability development to ensure our approach is grounded and authentic.”

Hepburn says they have more than 80 researchers currently involved, effectively providing that platform between the two hulls of the waka. There is a strong emphasis on diversity with about 54 per cent female researchers, and 30 per cent Māori and Pasifica.

“But diversity to me is also diversity in backgrounds – socio-economic status and the way people think.”

The lead investigators are predominantly early-career researchers and, given most CoREs have a seven-and-a-half-year lifespan, most researchers are on the upswing in their careers.

To bring through the next generation of researchers, they also have plenty of honours and masters’ scholarships and they will be looking for well-rounded candidates to receive those.

Developing this research talent is an important component and, drawing again on the waka concept, Jackson says they have two moorings – training and monitoring. She firmly believes they were funded not just because of their diversity, but also their training.

“It’s research excellence, but you also need to be training the next crop of excellent researchers as well as providing opportunities into the job market.”

They have already seen former students go into regional council environmental roles where their understanding of that community connection, Treaty of Waitangi and rights around fisheries, for example, has been hugely valuable for people applying for jobs because it is something employers are looking for.They also have community members involved in CPSS who are paid for what they do in consulting with the communities.

“Our goal is to support community leaders. There is no point going to communities and telling them what to do,” Hepburn says.“There has never been a period in world history where we didn’t know more about what is going to happen in respect to the environment.”

“It’s working out what the community is interested in and what their needs are – and who are the best people to go alongside and understand that? It’s important to recognise that there is stuff we don’t know and we might need to bring more people in,” Jackson adds.

Hepburn and Jackson acknowledge the level of fear there is about climate change and the uncertainty it creates.

“There are things we can do. We know, for example, if we can fix catchments there’s less sediment coming down the rivers and our reef systems will become more resilient to heat waves,” says Hepburn.

“Research shows that if the water is dark and there is a heat wave, the seaweeds in there respire more, burn up all their energy and then collapse. If there’s light around they are able to be more resilient.”

Research also shows kelp forests can buffer against ocean acidification and there is scope to actually do something about our kelp forests.

Jackson says people underestimate the loss that occurs when a species of ocean flora or fauna disappears.

Associate Professors Anne-Marie Jackson and Chris Hepburn: “Positive, forward-facing research on climate change is at the heart of what we are doing.” 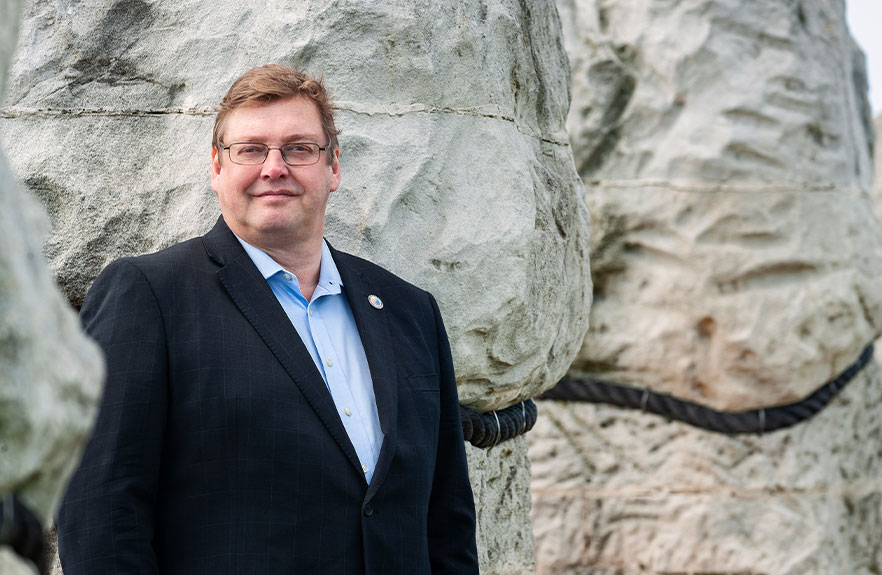 Renewed CoRE funding for the Dodd-Walls Centre for Photonic and Quantum Technologies provides certainty as they build a cutting-edge team in an increasingly important global industry.

Professor David Hutchinson (Physics) well remembers the euphoria he felt in 2014 when he first heard they had secured funding for the Dodd-Walls Centre for Photonic and Quantum Technologies Centre of Research Excellence (CoRE) to be established.

This initial six-year funding has now been extended for another eight, through until the end of 2028.

Having built so much over the past six years, Hutchinson said the feeling on hearing the centre was refunded was more relief than euphoria, knowing how many people relied upon it.

“One of the things we’ve done well is nurture our younger staff. That’s been reflected in the number of Marsden Fast-Start and MBIE Smart Ideas grants we get, which tend to be for early-career researchers,” he says.

“Some of our principal investigators now were postdocs when we started, so we have supported people through that transition into their careers. We’ve also got a bunch of really talented research fellows we support who, we think, will probably end up in academic positions.”

Hutchinson says the extended funding gives longer-term stability and allows people to pursue the research they really want to do, rather than something that fits within a three-year project.

“Once funding is too constrained the whole system becomes too conservative. The centre funding allows us to be a little less risk averse.”

This has already led to some impressive papers in high calibre journals, including ground-breaking work on quantum jumps, on electro-optic frequency combs in Nature and on vortex dynamics in superfluids in Science, he says.

“We’re recognised internationally as a worldwide contributor in the quantum physics space and the photonics space.”

“We’re recognised internationally as a world-wide contributor in the quantum physics space and the photonics space.”

Security of funding has also helped cement collaboration across groups of researchers who wouldn’t necessarily have worked together. For example, Professor Keith Gordon (Chemistry) has been working with University of Auckland biomedical optics researcher Dr Frédérique Vanholsbeeck and start-up entrepreneur Professor Cather Simpson, who are all members of the Dodd-Walls Centre.

“It has allowed us to build this ‘Best Team in New Zealand’ approach to things.”

Hutchinson says it also allows them greater scope for industry engagement, as well as education outreach initiatives through Otago Museum and MOTAT, Auckland’s Museum of Transport and Technology.

A report by the Australian and New Zealand Optical Society last year put a $1.2 billion raw value on the photonic industry in New Zealand.

A range of research is coming down the pipeline. For example, the centre has strength in biomedical applications, including recent Marsden success to look at optical imaging of blood flow in bone, as well as numerous other applications.

Several research groups under the Dodd-Walls umbrella are working on novel ideas around quantum computing and quantum information, such as exploring how they can use quantum and optical communication technology developed through the Dodd-Walls Centre for secure information transfer via satellite.

“We have some advantages in what we do that might give us an edge there. These are things for which we are seeking additional funding,” says Hutchinson.

“We’re not going to revolutionise, necessarily, how we do optical communications for the internet directly, but we will certainly contribute to niche areas.

“It’s a Kiwi thing: find the thing you do well – your advantage – and build your niche. Create your business, your potentially multi-billion dollar industry. You’re not the global player with the trillion-dollar game, but you’re part of it and can make a big difference in the context of the New Zealand economy.”

Professor David Hutchinson: “It’s a Kiwi thing: find the thing you do well – your advantage – and build your niche…”
Photo: Alan Dove